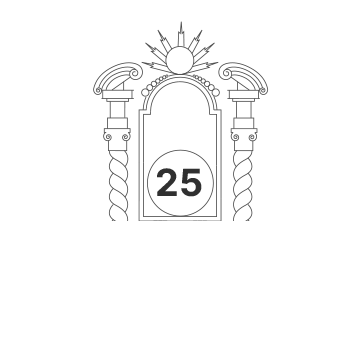 The first religious Order of the Visitation was founded in 1610 by Francis of Sales (1567-1622), coadjutor bishop of Geneva and by Baroness Jeanne Frémyot de Chantal, Baron Chantal’s widow for already a decade who decided to retire to a contemplative life.

The two basic purposes of the congregation were, according to the Spiritual Directory, contemplation and prayer and service to the poor and ill. During the phases that followed its foundation, however, the first function came to have absolute preponderance over the other, suppressing it. It was in fact the absence of external austerity that allowed for a large spreading among those who could not have physically borne the conditions imposed by the reformed orders and that allowed the Order of the Visitation to expand quickly in all Europe.
The foundation of the convent in Torino dates back to 1638: the motivations have to be searched in the vast popularity that Francis of Sales had at the Court of Savoy, witnessed by the direct relations with Duke of Savoy Carlo Emanuele I and by the particular devotion shown by Duchess Christine of France.

It was then the Duke Vittorio Amedeo I who granted a vast lot of land for the construction of the church and the monastery in the so-called “new city”, the first extension of Torino in which the important requalification plan for the city was implemented, with the purpose of making Torino suitable to its role of capital city of the Duchy, in evident comparison with the other European capitals. Compared to the homogeneous architecture of the blocks of the XVIII century, the volume of the church emerges clearly, with its XVIII century façade placed at the corner of today’s Via Arcivescovado and Via XX Settembre. The church, built in view of the beatification of Francis of Sales (1661, canonized in 1665) was finished by 1660 and by common critical consent is today attributed to Francesco Lanfranchi, father of the famous Carlo Emanuele. The planning choices of this architect make of the church of the Visitation one of the first examples of religious architecture built in Torino according to the canons of the Counter-Reformation: the structure is characterized by a central, square hall onto which open the semi-circular spaces of the entrance and the two lateral chapels, as well as the larger space of the presbytery. The architectural order, marked by pilaster strips resting on a high stylobate, enhances the edges of the structure and supports an entablature that wraps the whole hall. The four big arches that define the space of the lateral rooms support the windowed drum and the dome, decorated in the 1760s by Michele Antonio Milocco, with the magnificent fresco that depicts Paradise, where St. Francis of Sales is welcomed in glory in the pendentives, the artist portrayed the theological virtues. Milocco’s work is visually connected to the statues and the small canvases previously placed in the hall: the characters represented there reach holiness, and thus Paradise, through the theological virtues.

The presbytery was redesigned on occasion of the canonization of Baroness de Chantal (1768): the marble altar, made by masters from Lugano towards the end of the XVII century in substitution of the primitive, wooden altar, was disassembled and reassembled according to a more imposing design that used the four tortile columns in black marble that frame the altar piece painted by Ignazio Nepote: Visita di Maria alla cugina Elisabetta (the Visitation of Mary to her cousin Elizabeth) (1760-1768) an event remembered by the dedication to the church itself.
The marble altar of the lateral, left room dates back to 1730 and owes its design to Filippo Juvarra, who accepted Count Turinetti di Partengo’s invitation, the latter having decided to finance the building of a new altar dedicated to St. Francis of Sales. The flat form of the marble, polycrome composition interrupts the curve of the wall that gathers it and is integrated with the trabeation that wraps the hall through the top pediment and the curve of the tympanum, interrupted and reversed outwards. Alessandro Trona painted the piece where St. Francis of Sales is represented handing over the rules of the Order to Baroness de Chantal and the first Visitation nuns.
With the coming of Napoleon, the Visitation convent was closed. During the Restoration, the convent was purchased by the Missionary fathers of St. Vincent, rectors of the church since 1832, who dedicate the right hand chapel to their founder, San Vincenzo de’Paoli, and change the ancient choir destined to the nuns with the Chapel of Passion, with an altar designed by Carlo Ceppi. In 1851 San Leonardo Murialdo was ordained priest in the church. 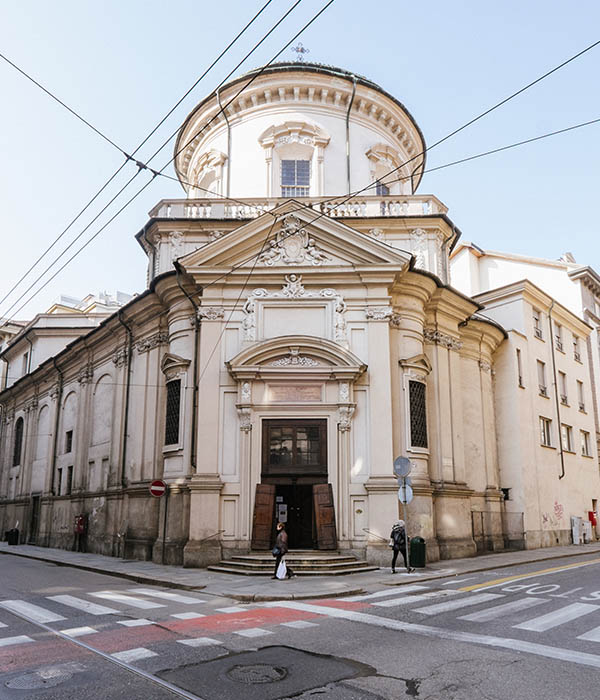 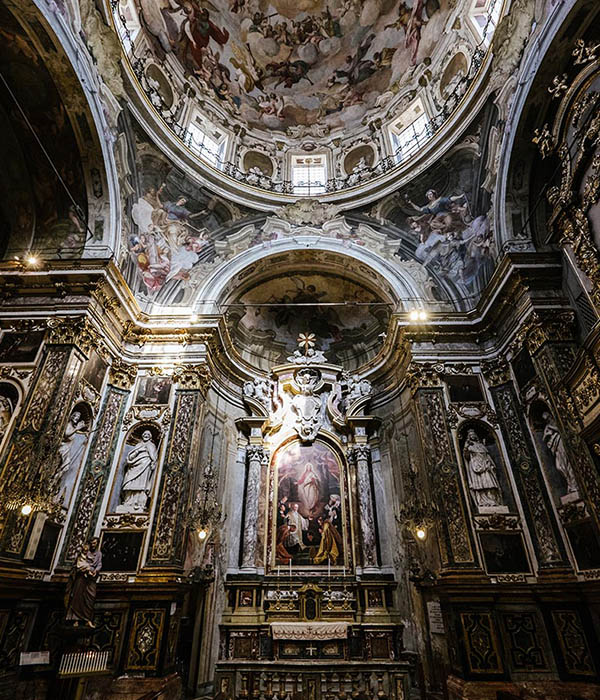 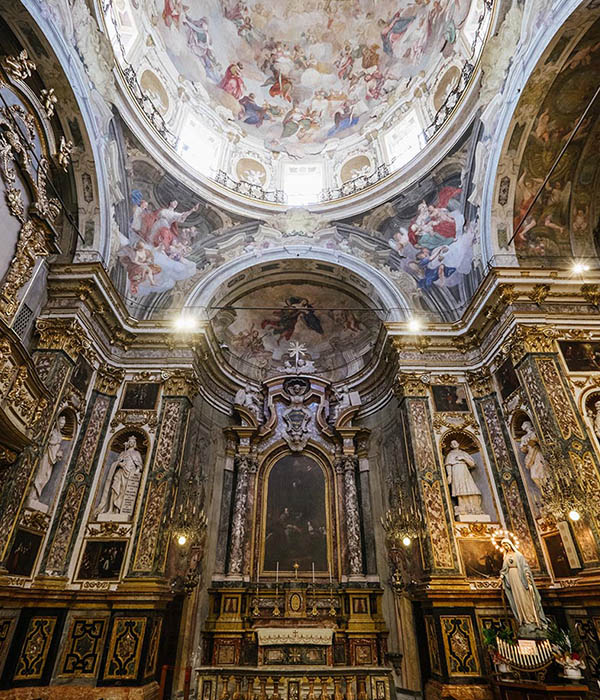 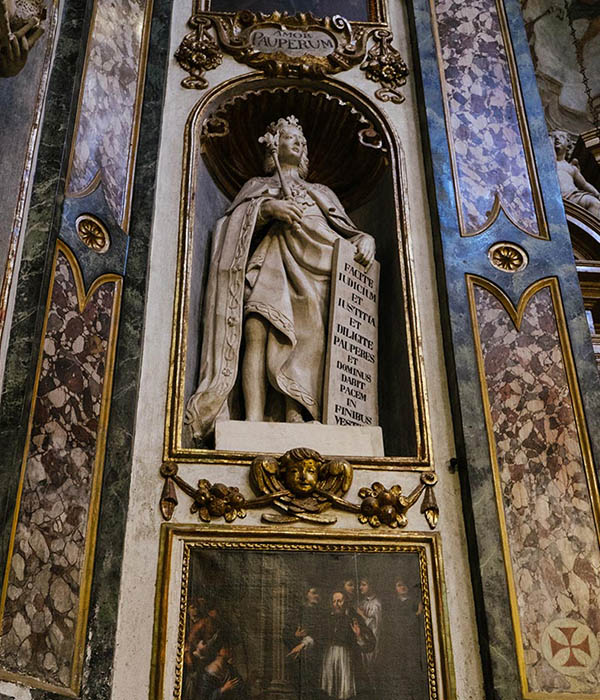 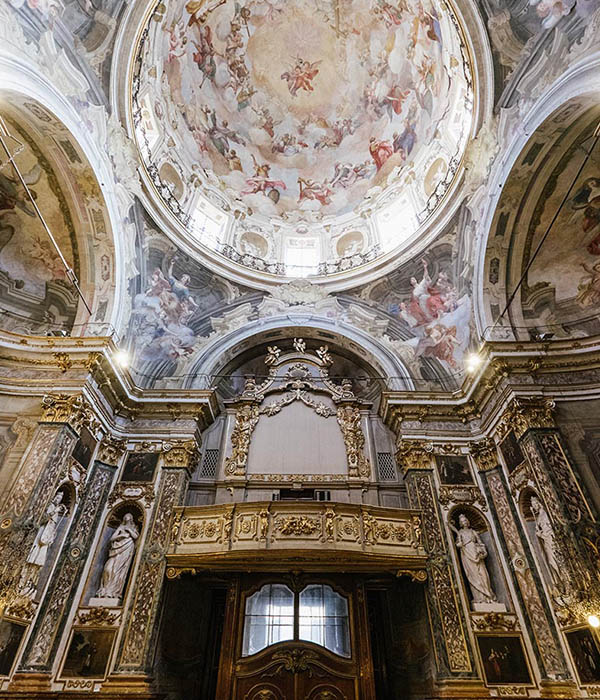 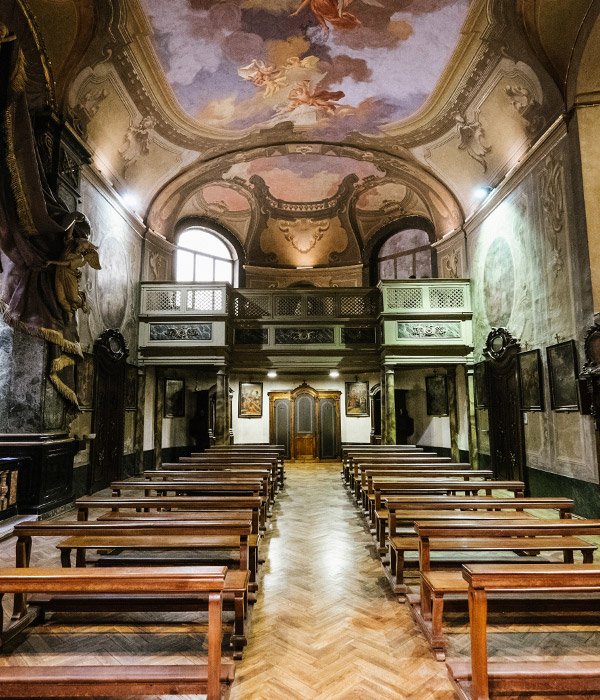