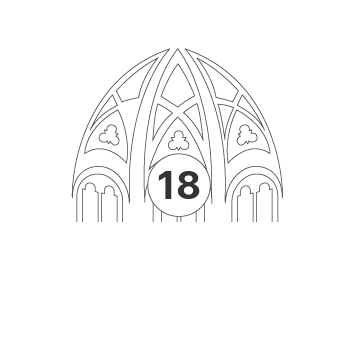 Via San Pietro in Vincoli 2, Torino

In the north of the old centre of Turin, lies the Small House of the Divine Providence known as Cottolengo, a city within a city. The actual vast complex is the result of a continuous growth and renovation of the structure according to the changing needs of welfare.

Also, the life of the founder of the Institute, Giuseppe Benedetto Cottolengo, can be seen as a reaction to the requirements of that time. Born in Bra on 13th May  1786 of a family of humble standing but rich in faith, since his youth Cottolengo had a clear idea of his vocation which led him to become a priest. Ordained in 1811 and sent to Conegliano d’Alba as curate for a year, he graduated in theology in 1816 without neglecting his charitable works (as seen during the epidemic in 1817 at Bra). In 1818 he was called to Turin in the congregation of Theological Priests of the Corpus Domini, ie. in charge of the church of Corpus Domini.

Devotion to the holy figure of Vincenzo de’ Paoli and firsthand knowledge of the poverty of the working-class neighbourhoods he frequently visited, but above all the story of the dying mother turned away from the city’s hospitals on 2nd September 1827 proved Cottolengo’s true charisma: taking in poor people rejected by everyone and, on a social level, establishing an alternative welfare system complementary to the one in use then. With the help of some charitable women in 1828 he founded the “Deposito dei poveri infermi del Corpus Domini” (Centre for the poor invalids of Corpus Domini) in Via Palazzo di Città where he rented out several rooms. But in September 1831 the centre, called “Deposito della Volta Rossa” was closed by the government due to the fear of cholera.
It was then necessary to find new accommodation. The city centre was excluded since the property market did not offer any possibility to expand in the future, as was the area around Porta Nuova, residential and middle class. The search ended up at Borgo Dora and Valdocco, an industrial and working class suburb in constant transformation: a small house in Borgo Dora was named“Piccola Casa della Divina Provvidenza sotto gli auspici di san Vincenzo de’ Paoli”. (“Small House of the Divine Providence” under the protection of St. Vincenzo de’ Paoli”). The first sick were moved to the new premises on 27th April 1832. With the help of the Copasso brothers it was renovated and other buildings were soon added for the sick and poor, assisted by the Daughters (afterwards Sisters) of the “Small House of the Divine Providence” and shortly afterwards by the Brothers of the Small House of the Divine Providence, religious families founded by Cottolengo. Its success attracted the attention of the government, which officially recognised it on 27th August 1833 as a moral entity for charity and assistance. The Farinelli brothers built the hospital and small church dedicated to the memory of “DIVIS ANTONIO ABBATI AC VINCENTIO A PAULO” on behalf of Cottolengo. It was blessed on 5th October 1834.
The hospital took in men and women rejected from other hospitals who were then treated by Dr. Lorenzo Granetti, “benemerito (meritorious) dell’Opera del Cottolengo”. In 1837 the hospital and church were donated to Cottolengo by the Farinelli brothers. Over the following years Cottolengo enlarged his Opera with more buildings to meet the growing needs of the poor who came to his door. Thus already in 1837 roofs, stables and laboratories had to be added and it started continuously adapting to the rising number of guests – thousands, by now – and to the needs of treatment and production, making it an ever open building yard.

The church is also the result of many transformations. The first building, corresponding to the actual entrance “Rotonda” (Rotunda) whose façade can be recognised by its neo-classical style with tympanum, a chapel of the Rosary was added in around 1838, where Cottolengo was laid to rest, dying on 30th April 1842. The damage caused by the explosion of the powder keg nearby gave rise to the opportunity to carry out further renovation on the chapel in 1852 , under which the funerary crypt of St. Michele was laid. To coincide with the start of the beatification process of the founder, in 1864-66 a new extension was made, obliterated by that of 1894-95, both at the behest of his successor, father Luigi Anglesio.
The actual configuration of the church corresponds to the Neo-Romanesque project by Vincenzo Capuccio. The magnificent building, consecrated on 23rd April 1898, consists of a well-constructed basilica in four bays and three naves, mono-apsidal with ambulatory and endowed with a matroneum and a vaulted roof. A precious imitation of the Romanesque Lombard architecture with some concessions in gothic style, as in the apsis and projecting polygonal chapels. The liturgical furnishings were made by famous artists, under the guidance of the Master Enrico Reffo (creator of the windows of the lateral chapels). In 1917-18, in the occasion of the beatification of Giuseppe Benedetto Cottolengo, a chapel was created in his name and designed in Neo-Baroque style by the architect Giuseppe Gallo located next to the rotunda. The canonisation of the founder (1934) provided the opportunity to replace some paintings, whilst in 1953 the floors were redone. In 1979-82, a reinforcement of the foundations was necessary due to the looseness of the ground which were once marshy. The church is crowned with a Neo-Romanesque bell-tower that stands out as a visible reference for the “charity citadel” in Turin’s skyline.

Texts by the Guarino Guarini asociation 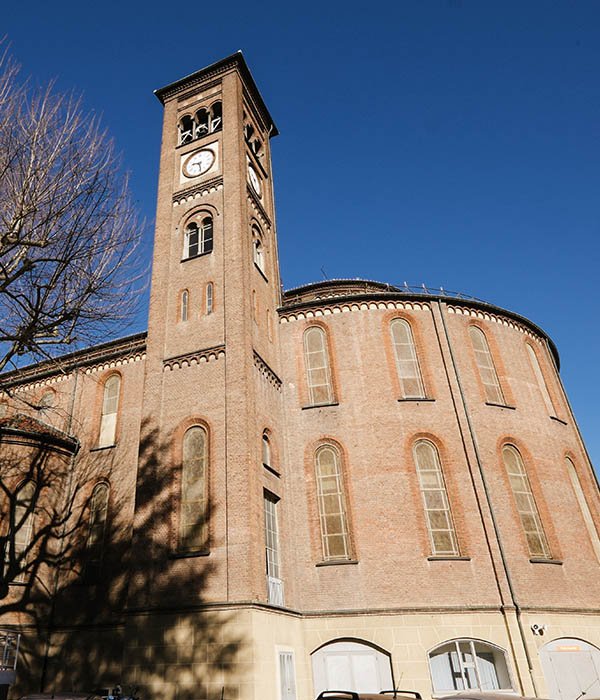 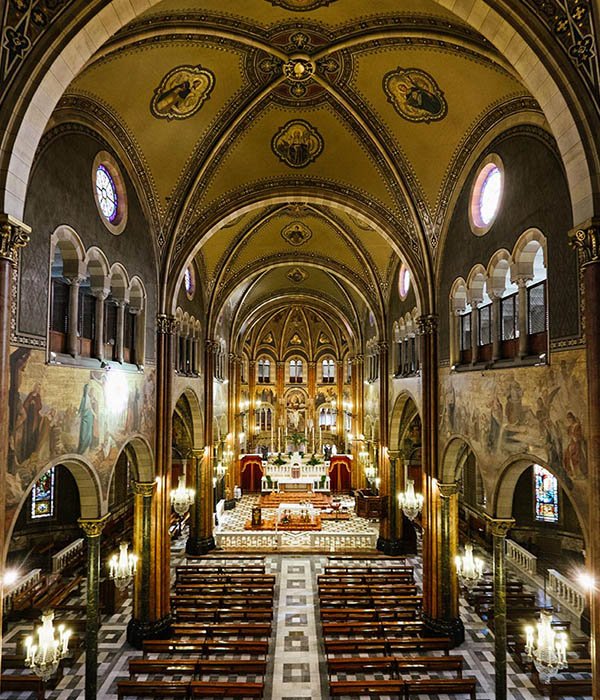 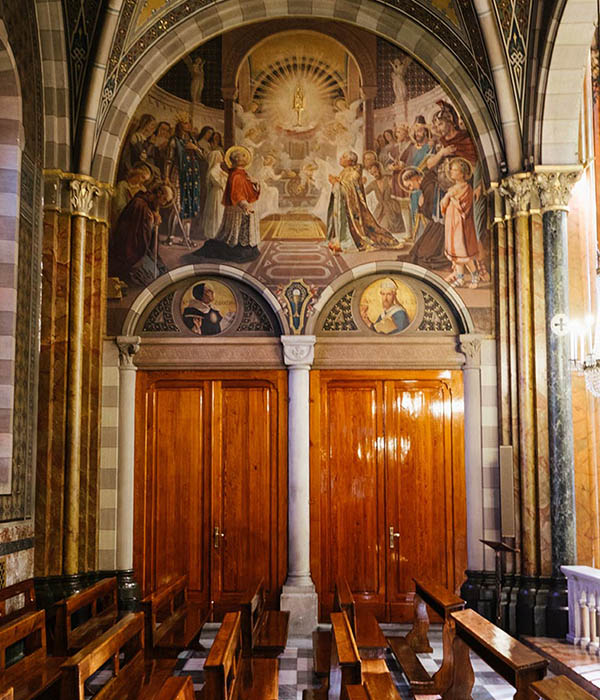 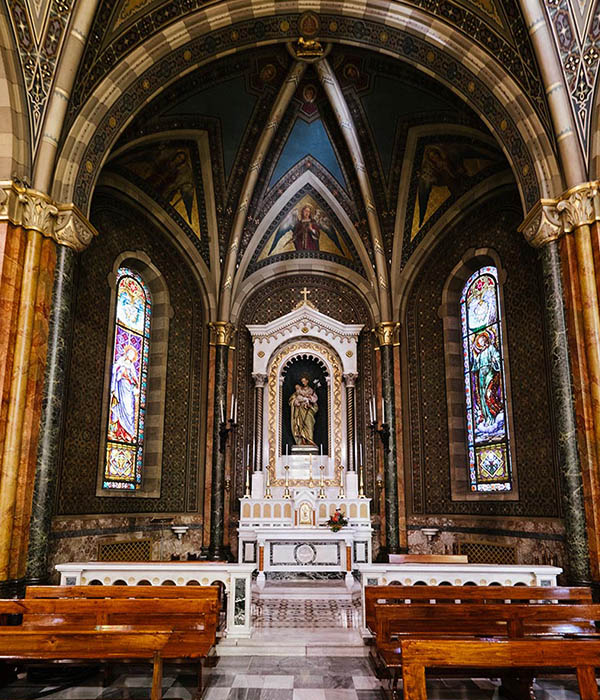 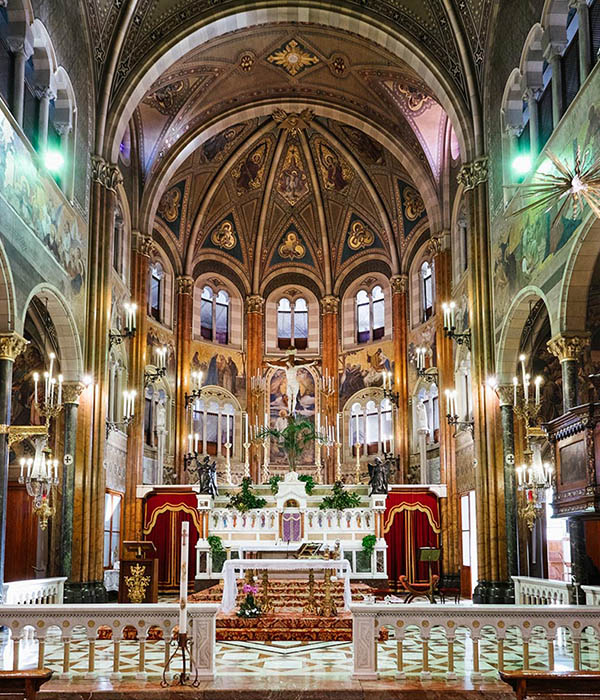 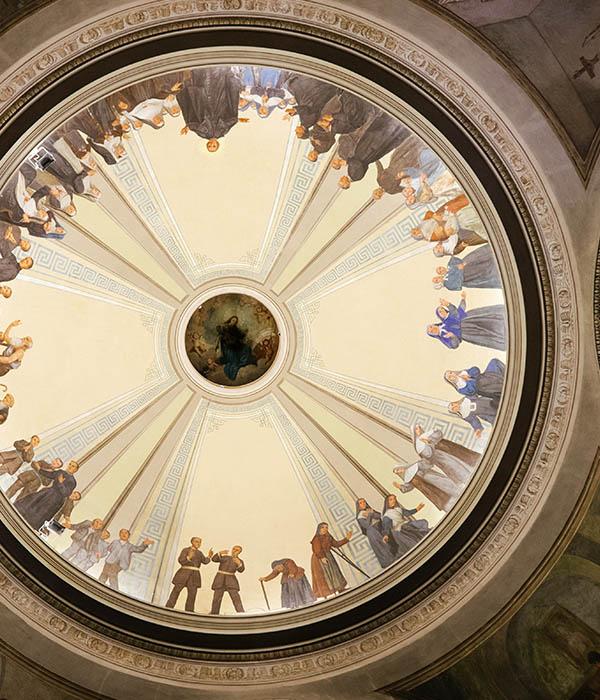