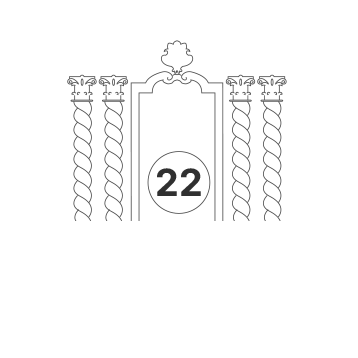 The congregation of the Fathers of the Oratory (the Oratorians), founded in 1552 by St. Filippo Neri, arrived in Turin in 1648 upon the initiative of Pietro Antonio Defera. ln 1651 Sebastiano Valfré and other fathers entered the congregation and settled down in a house in Borgo Po taking care of the Corpus Domini church as of 1653.

In 1667 the Oratorians purchased the parish of St. Eusebio and upon death of Carlo Emanuele II in 1675, who was attended to by Fathers Valfré and Ormea, they were granted a lot without buildings in the area between the first expansion of Turin (present-day Via Roma – Piazza San Carlo) and the second expansion (Via Po) to build the church and their new house; next to the lot of the Oratorians the works of the block of the Jesuits (Collegio dei Nobili – College of the Nobles) and the Palazzo dei Principi di Carignano (the Princes’ of Carignano Palace) were begun in 1679.
The first overall project of the block was designed by Antonio Bettino, who placed the church on the side facing the building of the Jesuits. with a small parvis facing the present-day Via Maria Vittoria, main axis of the noble settlements between the XVII and the XVIII century. A project by Guarino Guarini is documented only by etchings in “Disegni d’architettura civile ed ecclesiastica” and there are no other known sources of his direct intervention.

The works continued in the 1680s, according to a new central dome plan. ln 1687 the foundations were completed and in 1703 the covering was almost finished but the subsequent suspension of the works for the long period of the war (which ended with the famous siege in the summer of 1706) the bombings of those same years and problems in the foundations caused serious stability problems, to the point that the dome and the southern part of the church collapsed in 1714.
A great figure of that period of construction of the church and the siege was the blessed Sebastiano Valfré (1629-1710). Appointed head of the Oratory community in 1671, he was a great mover of the spiritual, ecclesiastical and political life of the city, attentive to the poor classes as well as the Savoy family piety (educator and councilor of Vittorio Amedeo II, spiritual father of his daughters and religious assistant to the court). The third altar on the right is dedicated to Valfré (Valfré conforta un soldato ferito – Valfré comforts a wounded soldier: by Tommaso Lorenzone); his remains are preserved in it.
ln 1715- 16 Filippo Juvarra, ordained a priest in his hometown of Messina in 1703, started designing the new church, in close collaboration with the community, where he established his first residence in Turin. In 1722 on the occasion of the first centennial of the canonization of St. Filippo (co-patron of Turin since 1695), a temporary arrangement of the presbytery (which survived the collapse) was completed along with the first two lateral chapels. On that occasion the monumental altar, designed by Michelangelo Garove and Melchiorre Galleani by commission of the princes of Carignano between 1697 and 1703, was moved toward the end wall.
The altarpiece represents an aggregate of the themes of the Savoy patronage and the history of the Oratorians in Turin. It was created by Carlo Maratta (1701-1708) and depicts Vergine e il Bambino che porgono corone ai due beati della dinastia sabauda (the Virgin and Child handing a crown to the two blessed of the House of Savoy), duke Amedeo IX (1435-1475) and Margherita of Savoy (1390- 1464), flanked by St. Giovanni Battista and St. Eusebio, holder of the parish.

The first two chapels were also designed in relation to the high altar: the one on the right was dedicated to St. Lorenzo, with the altarpiece by Francesco Trevisani (now in the first altar on the left) and the one on the left was dedicated to San Filippo che intercede per la città di Torino (St. Filippo interceding for the city of Turin), with the altarpiece by Francesco Solimena.
The definitive project by Juvarra dates back to 1730 and is characterized by an enormous vault covering the nave and joining the pre-existing presbytery. the lateral elliptical Chapels and the use of architectural orders to coherently join and harmonise the different parts of the building. The project was also carefully introduced into the town layout: the pronaos is aligned with the wing of the cloister, whereas the façade conforms with the adjacent Oratory (projects by Antonio Bettino and Filippo Juvarra respectively) and is exactly opposite Palazzo Asinari of St. Marzano (project by Michelangelo Garove, 1684-86).
Construction of the church stopped in 1738, when Juvarra left for Spain. The decorations include the altarpiece of the Vergine con san Carlo Borromeo e san Francesco di Sales (the Virgin with St. Carlo Borromeo and St. Francesco di Sales), bishops who promoted the Catholic Reform and were penitents of St. Filippo Neri (first altar on the right, altarpiece by Rocco Comaneddi). The church was completed after the Restoration by Giuseppe Maria Talucchi (pronaos, stairway, sacristy: 1823-1851) and by Ernesto Camusso (front part of pronaos, 1891), 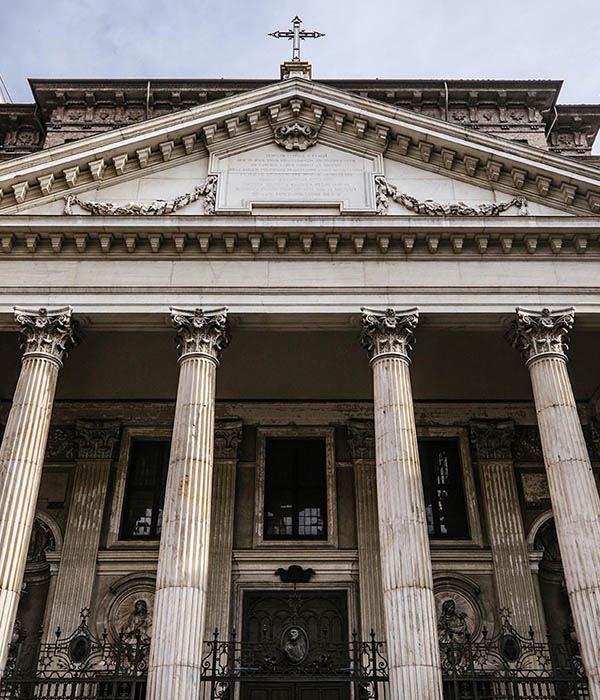 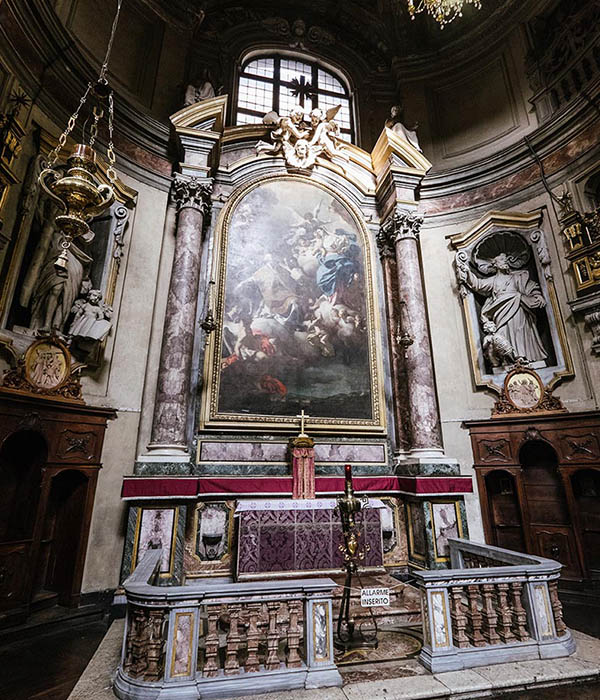 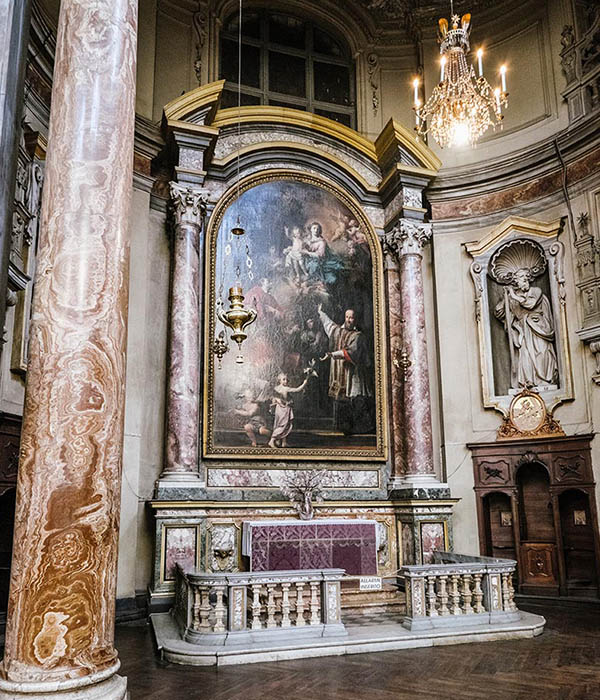 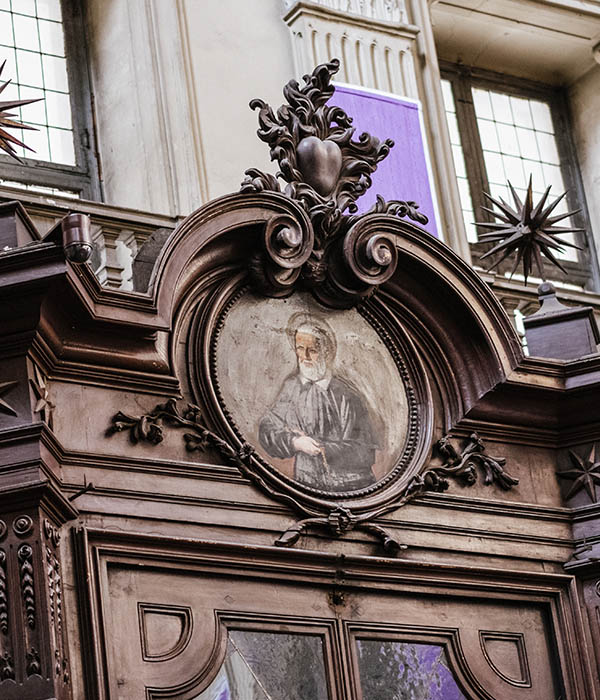 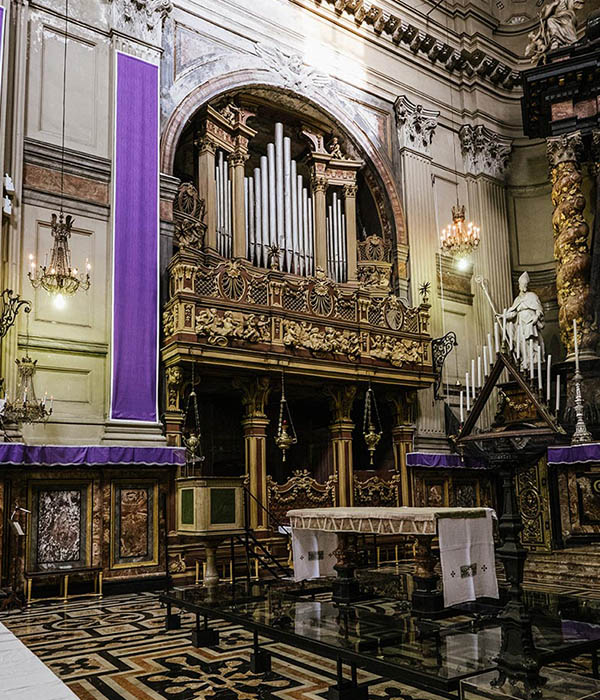 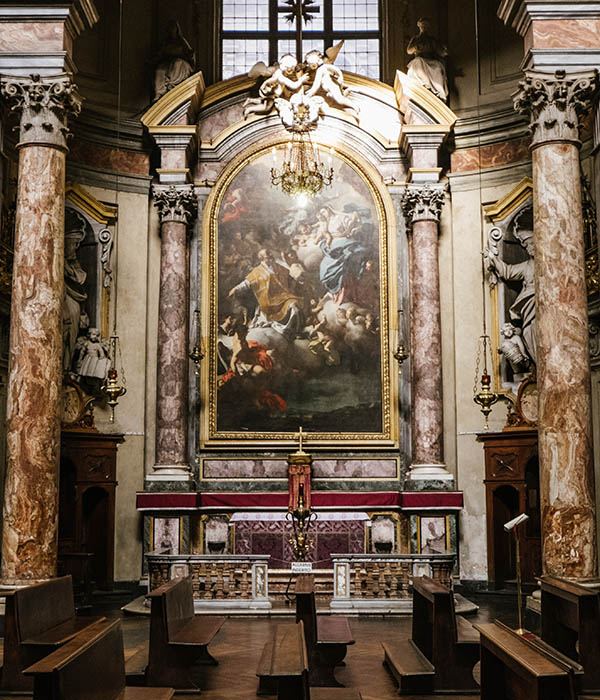