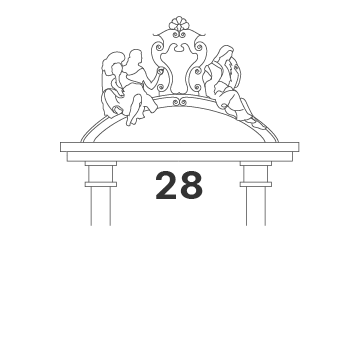 The present parish church that stands in Via Po and which, thanks to its double façade, allows the arcades on both sides of this very busy city artery to run uninterruptedly, was built during the first decades of the XX century.

The pre-existing church, commissioned to the military engineer Carlo Morello occupied the initial part of Via Sant’Ottavio and was in a different place from today’s building. It was demolished at the beginning of the XX century in order to make room for today’s larger building, more suitable to the changed times and the city’s new road system.In order to find the origin of the dedication to the Santissima Annunziata (the Most Holy Annunciation), one has to go back to the mid-XVI century, to the time of Duke Carlo III.
The duke chose the Virgin, using the title of “Santissima Annunziata” as the protectress of the House of Savoy and united the image of the “Santissima Annunziata” to the Ordine del Collare (“Order of the Collar”), established by his predecessor Amedeo VIII and renewed by Emanuele Filiberto, mindful of the religious and moral aspects of the Counter-Reformation age. A few members of the Confraternita del Nome di Gesù (Confraternity of the Name of Jesus), who resided in the area near the Po river and away from the church of San Martiniano, where the periodical meetings of their affiliates took place, decided to find new premises.

In around 1580, they were accommodated in a small church dedicated to San Marco near the old bridge on the Po river; however, due to the excessive plainness and smallness of the rooms, their stay in that location was short-lived. The brothers were able to witness the laying of the foundation-stone of their church, planned by the engineer Morello, only in 1648, following the purchase of a plot of land at the entrance of today’s Via Sant’Ottavio. The plan was particularly simple: a single nave, four lateral chapels and a crypt underground. At the time of its opening to worship the façade was provisional. The life of the church was made even more unsettled and its future more uncertain with the Savoy edicts that provided for the alignment of all the façades overlooking the new Via Po, a crucial artery of the city’s southern extension wanted by Carlo Emanuele II through his architect Amedeo di Castellamonte. According to these edicts the church should have been demolished, but this did not happen.The church was placed in an urban context that was changing very rapidly. In 1699 the Confraternity was authorized to occupy an alley in order to use it for the new façade. It is worth pointing out that in those years the friars put Bernardo Antonio Vittone in charge of building the high altar, the same that can be admired today in the reconstructed church. During the French occupation, the church became a parish, acquiring the parishioners of the small church of San Marco. A period of neglect followed, which led to the deterioration of structural parts of the church. Moreover, the building proved insufficient in providing for the needs of the increasing number of followers. The fact that the City Council had decided to reopen the street occupied by the building was another cause for conflict. Only in 1914 was an agreement reached, which provided for the demolition and the reconstruction of the building on the expropriated, adjacent lot. World War I suspended the works, resumed in 1929.

The new church was built according to a plan drawn by the engineer and architect Giuseppe Gallo, an absolute protagonist of Piedmontese sacred architecture between the end of XIX century and the beginning of XX century. The construction works continued until 1934, and the façade was made at the end of the works, giving the building its new urban dimension.
The church has a double façade giving onto Via Po: the external one, in travertine rock, is made of two superimposed orders, the lower of which accomplishes a continuation with the street’s arcades, while the upper one forms a sort of loggia divided into three arches. Sculptures by Buzzi Reschini and by Vignali complete the façade. The internal façade is made of marble and presents niches with statues of the four saints Pietro, Paolo, Giuseppe and Gioacchino (Peter, Paul, Joseph and Joachim). The sober, right side of the church and the bell tower are visible from Via Sant’Ottavio. Internally, the church shows a single nave (like the preceding church) and the intercommunicating lateral chapels. The most valuable piece is undoubtedly the high altar by the architect Bernardo Vittone from Turin, dated 1743 and already present in the old church, very ornate both in its decorative and chromatic aspects. Together with the Cappella dell’Addolorata (Chapel of our Lady of Sorrows) – on its left – which contains the “processional float”, made by the brothers Clemente on a design by Claudio Beaumont in 1749, the altar represents the only testimony of the previous building. There is a remarkable large painting by Beaumont in the apse, representing the Annunciation; it came to the church after being exposed in the Eremo dei Camaldolesi and later on in the Pinacoteca (picture gallery) of Turin. The remaining altars date back to the first three decades of the last century and show a rich profusion of marbles: among these, L’altare di Santa Rita da Cascia (The Altar of St. Rita da Cascia) by Bartolomeo Gallo, son of Giuseppe. 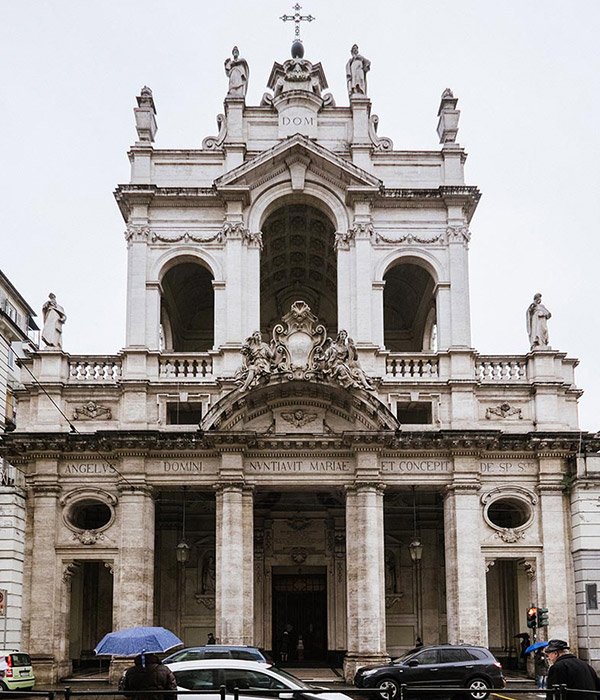 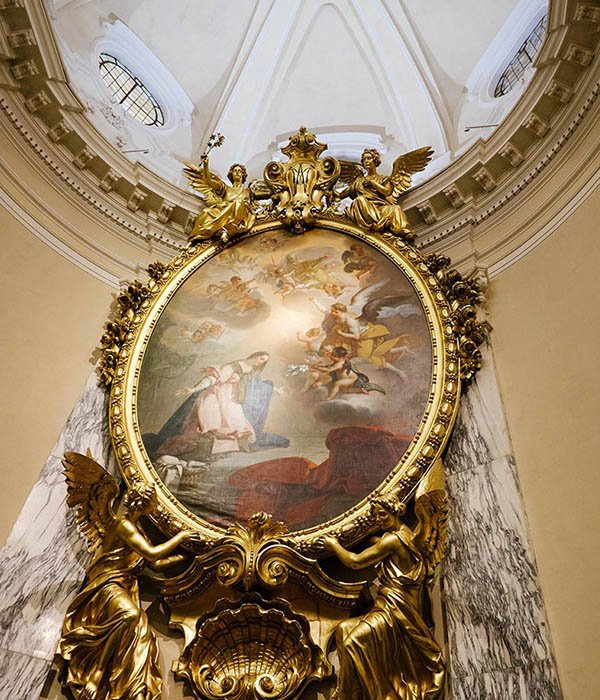 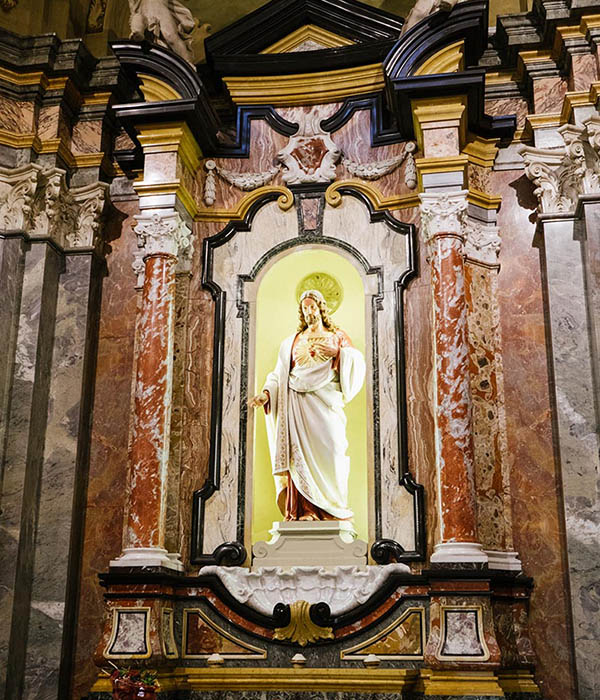 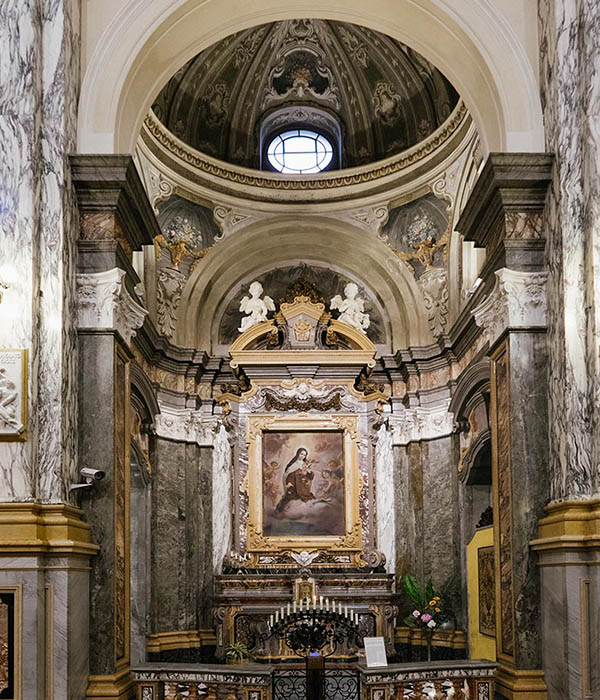 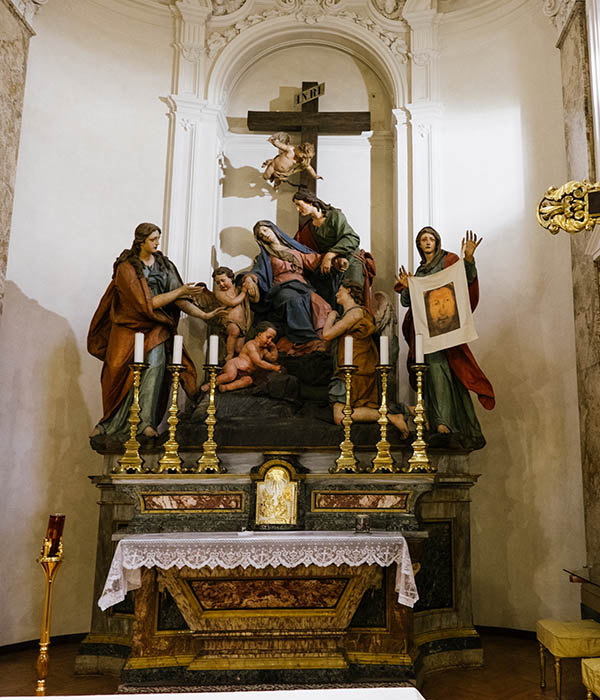 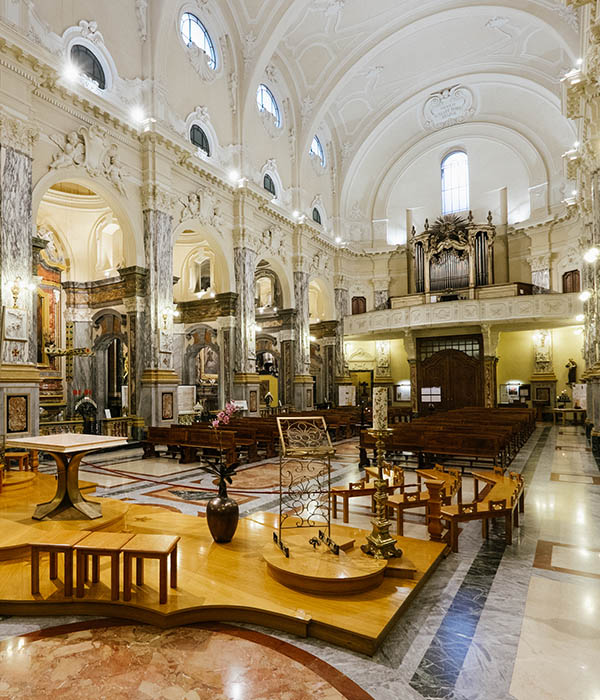