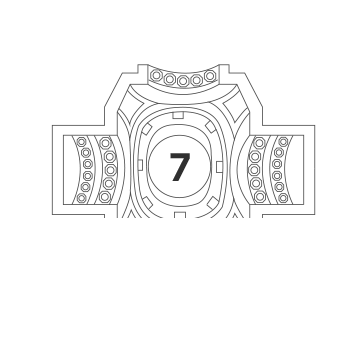 Saint Maurice, patron saint of the Savoy dynasty, according to tradition was a Roman soldier in the 3rd century in charge of a Theban legion, taking its name from Thebes in Egypt. Converting to Christianity with his legionaries, he was martyred at Agauno. on the Swiss alps. One of the most important orders of the knights of Savoy was dedicated to him, the Order of Saints Maurice and Lazarus.

The building of the church of the Ordine Equestre dei Santi Maurizio e Lazzaro (Ordine Mauriziano – the Equestrian Order of Saints Maurice and Lazarus), known as the Basilica Mauriziana, was decided by the Arciconfraternita di Santa Croce, the most ancient in Torino. Where the church stands now was a little oratory occupied by the friars as their temporary seat. In 1572 due to the small size of the building and the growing number of the religious community they moved to the small church of San Paolo, which was under the Abbey of St. Solutore.
The renovation proceeded quite slowly, and still in 1584 some sources reveal that there was no sacristy, the high altar was in poor conditions, and there were problems of water infiltration and humidity.
Towards the middle of the XVII century a new high altar was erected, commissioned to the engineer Francesco Lanfranchi and built by Bernardino Casella and Stefano Locca.

Lanfranchi’s participation in the design of the altar led to the long-held belief that he was also behind the church’s reconstruction plan in the years 1679-99. However, it is now known that in 1678 Michelangelo Morello was called and soon exonerated due to misunderstandings and disagreements with the Compagnia; later on, other projects were examined and the one made by Antonio Bettino was then selected, an architect who had gained a certain fame through his collaboration with Guarino Guarini to the building of the Chapel of the Holy Shroud. He proposed a church organized with a hall in the shape of a Greek cross, surmounted by a dome and a deep presbytery with apse. It is moreover probable that the Compagnia chose a less known architect because of their limited financial resources at the time.
The interior of the church is characterized by the use of free, isolated columns with high stylobates, four big arches, and one marked cornice that surrounds the internal perimeter.
The entire history of the construction of this church is characterized by the absence of funds.
The Compagnia had to sell property, accumulate debts and often interrupt the construction. In 1701 the church was finally inspected by the architect Antonio Bertola, who also made the high altar in 1703-1704, decorated with four gilded, wooden statues by Ignazio Perucca, representing the Doctors of the Church.
In 1728, the effort was interrupted by King Vittorio Amedeo II, who imposed the expropriation and transfer of the Church to the Order of Saints Maurice and Lazarus, in order to add it to the adjoining hospital and house on the same block as Santa Croce, already property of the Order.

After that, the church became subject to the urban transformations directed by Filippo Juvarra in the Porta Palazzo district and was ably inserted into the new urban context: the slanting front of the Basilica was used to delimit a rhomboidal square, according to the renewed entrance axis to the city.   A period of inactivity followed, and the only relatively significant intervention around the 1770s was the building of the new sacristies and the consolidation of the bell tower by Giovanni Battista Feroggio.
Prominent personalities in the arts worked in the XIX century inside the church under the high elliptic dome, frescoed by Paolo Emilio Morgari with the Trionfo della Croce (Triumph of the Cross). Beside the above-mentioned artists, worth mentioning are Francesco Gonin, for the frescoes of the pendentives and the intercolumniations, Rodolfo Morgari for the ones in the vault and the choir, Carlo Ceppi for the design of the pulpit and the confessionals, and Michele Antonio Milocco for his San Francesco di Sales intercede presso la Santissima Vergine per le anime del Purgatorio (St. Francis of Sales intercedes with the St. Virgin for the souls of Purgatory). The Risurrezione (Resurrection) is stored in the sacristy, a procession machine made of papier-mâché by Carlo Giuseppe Plura.
The neoclassical façade, wanted by Carlo Alberto in 1834 and made by Carlo Bernardo Mosca, shows a tetrastyle pronaos with Corinthian columns, a triangular pediment, and hosts the statues of the titular saints by Silvestro Simonetta and Giovanni Albertoni. 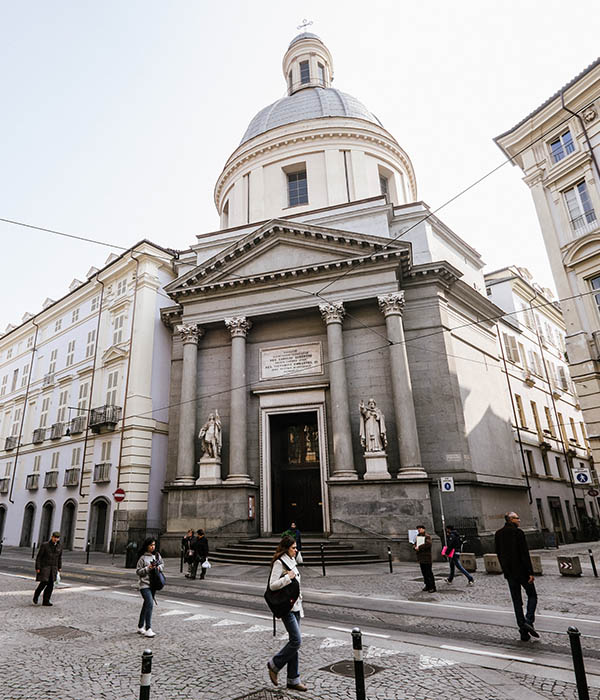 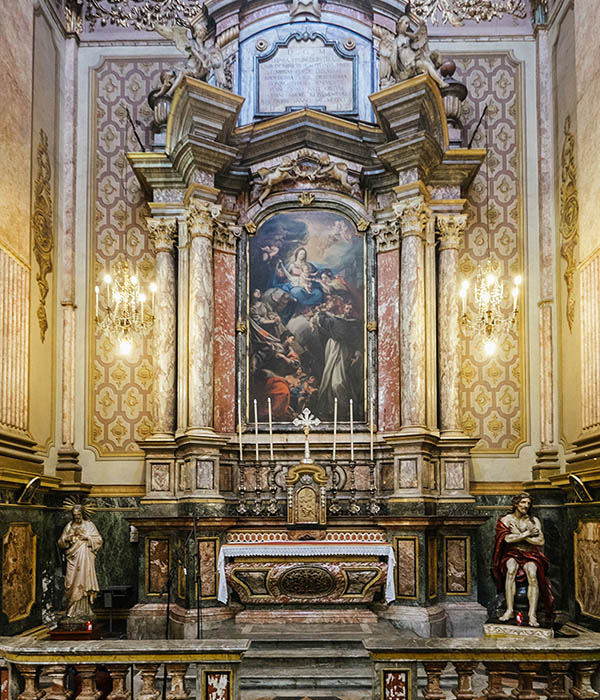 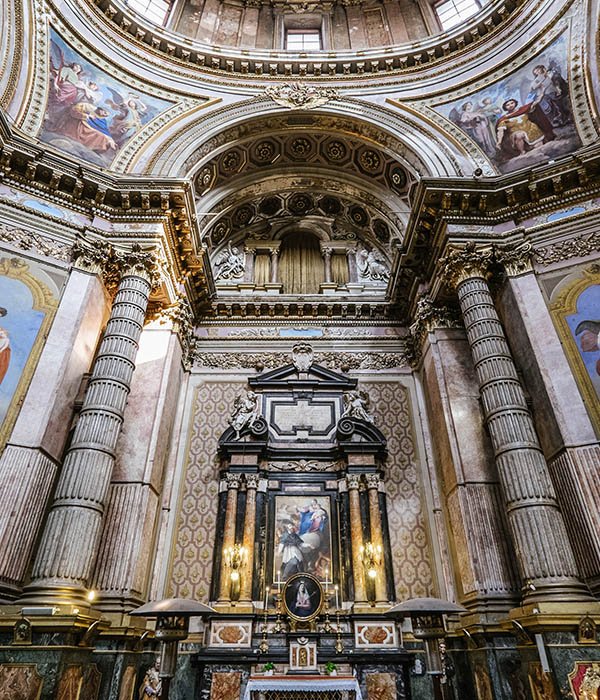 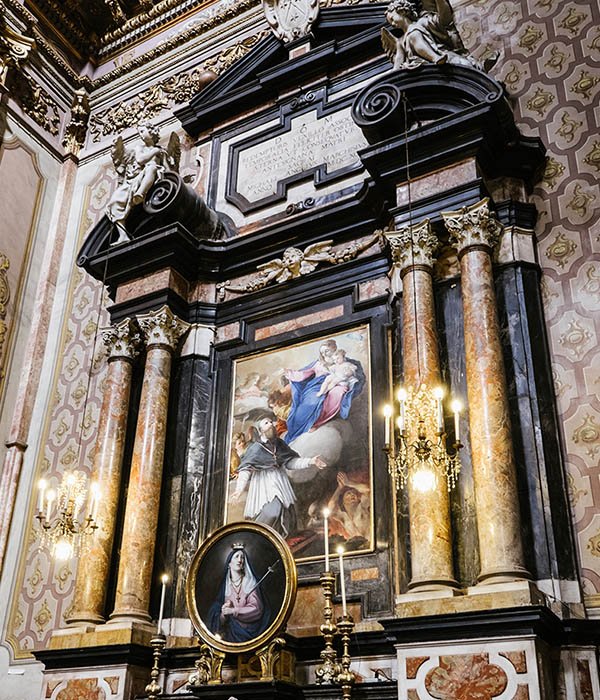 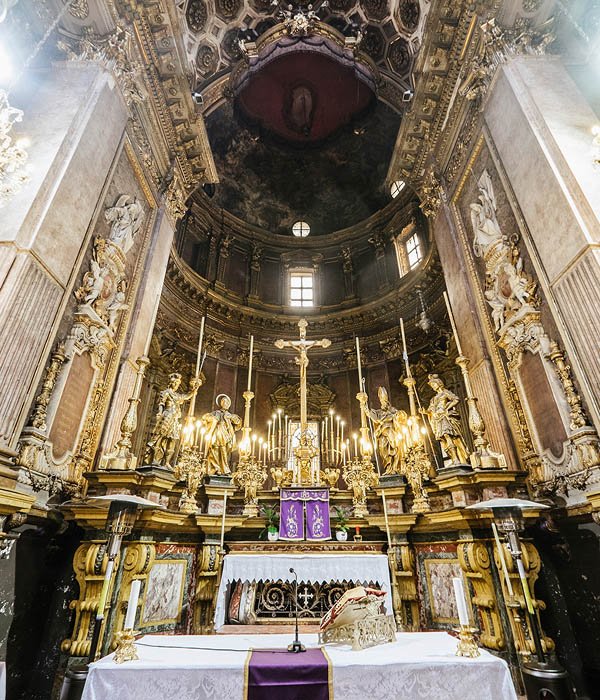 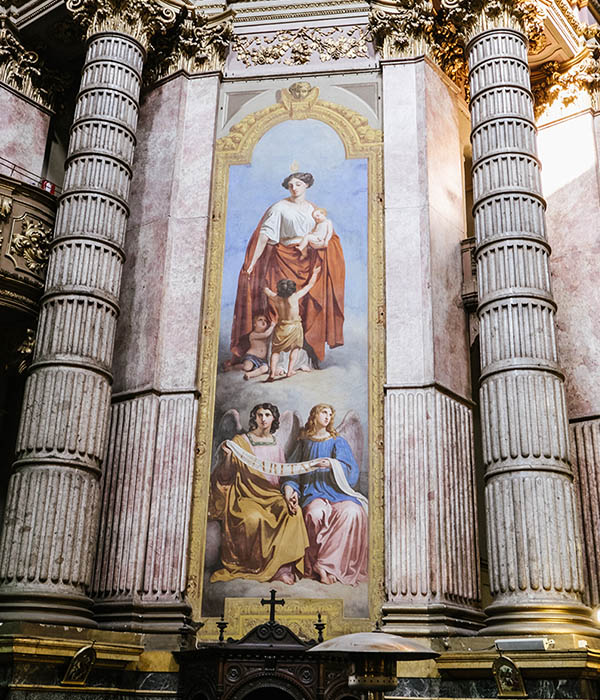