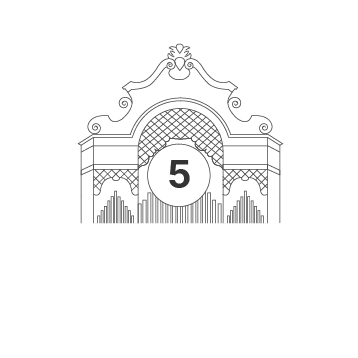 After three decades of military occupation, in 1563 Torino became the ducal seat of Emanuele Filiberto of Savoy. The church seals the alliance between the Savoy dynasty and Company of Jesus, called to Turin to exercise their educational ministry already in 1566 on initiative of the Venerabile Compagnia della Fede Cattolica (the Venerable Company of the Catholic Faith), an institution that would later become the Compagnia di San Paolo (see the Chapel of San Paolo (St. Paul), first on the right, with the painting by Federico Zuccari, 1607).

In 1574 the Jesuits came into possession of part of the San Paolo block, in Via Dora Grossa, one of Turin’s main axes (the current Via Garibaldi), seat of the parish of Santo Stefano and of the houses of the Diocesan Seminary.
The church is dedicated to the most ancient protectors of Torino, the holy martyrs Solutore, Avventore and Ottavio, soldiers of the Theban legion, who were martyred due to their faith during the persecutions of the Roman emperor Diocletian. They were buried in Turin by the Christian patrician Giuliana and remembered in a hymn by San Massimo (St. Maximus), Bishop of Turin, at the end of the 4th century. In the pillars of the arch separating the nave from the presbytery are two stones, traditionally remembered at the footsteps of Santa Giuliana and the stone where San Solutore was beheaded. First preserved in the medieval abbey of San Solutore, the relics were kept from 1536 at the church of Sant’Andrea , (today, the “Consolata”): moved in 1575 into a provisory chapel in the house of the Jesuits, they were placed in the new church at the end of its construction, on 20th January 1584, which is still the day they are remembered in the archdiocese of Turin.

The church structure faithfully reflects the guidance concerning the architecture of the new churches that emerged from the Council of Trent (ended in 1563) and examined in depth in cardinal Carlo Borromeo’s Istruzioni (Instructions), a friend of duke Emanuele Filiberto (who in 1578 brought the Holy Shroud to Turin precisely with the pretext of shortening the cardinal’s pilgrimage). The plan, traditionally attributed to Pellegrino Tibaldi (Borromeo’s trusted architect), is actually the fruit of a complex process of architectural, religious and political choices, though in general it expresses the ideals and liturgical customs promoted by the Jesuits at the end of the XVI century.
The liturgical hall has a single nave so that the congregation can take part fully, see the Eucharistic altar and hear the sermon from the monumental pulpit. The lateral chapels do not interfere with the centrality of the hall or altar.  Only after the canonization in 1622 of Ignatius Loyola and Francis Xavier, (the first Jesuit saints), was the ornamental and devotional apparatus enhanced; on the right of the presbytery, a chapel with altarpiece (attributed to Giuseppe Maria Viani) of San Francesco Saverio con sant’Ottavio, il beato Luigi Gonzaga, san Carlo Borromeo e santa Brigida (St. Francis Xavier with St. Octavius, the Blessed Luigi Gonzaga, St. Carlo Borromeo and St. Brigid); in 1678 brother Andrea Pozzo, who decorated the congregation’s most important Jesuit buildings, worked on the vault, painting the Trionfo di Sant’Ignazio (Triumph of St. Ignatius – the only surviving parts are the angels next to the organ and the Regent’s Savoy coat of arms over the large arch separating the nave from the presbytery); in the presbytery’s left chapel, an altar dedicated to Sant’Ignazio (design attributed to Andrea Pozzo), with an altarpiece by Sebastiano Taricco (about 1690). To the left of the entrance, in front of the before-mentioned altar of San Paolo, is the Statua della Vergine (Statue of the Virgin) by the Luganese sculptor Tommaso Carlone.
After the damage caused by the French siege of 1706, the apse’s area was radically restored according to the plans of Carlo Giulio Quadro, building a deeper choir, the dome and the bell tower; Filippo Juvarra intervened with the new high altar (which at the bottom houses the urn containing the relics of the Holy Martyrs, made in Rome In the XVI century) and creates in the new sacristy the altar of the Gloria di Sant’Ignazio (Glory of St. Ignatius) and the basin (works carried out in 1733-34). The four canvases lining the walls of the sacristy are by the Milanese painter Gianna Duranda portraying Mattatia, che colpisce gli idolatri; Anna che porta il figlio Samuele al sacerdote Eli; L’uccisione di Abele e Il sacrificio di Isacco (Mattathias hitting the idolaters; Anne taking her son Samuel to the priest; The killing of Abel and the sacrifice of Isaac).

Bernardo Antonio Vittone supervised the new marble flooring of the presbytery and the restoration of the façade (1768-1770), in which the statue of the Virgin by Ignazio Perucca and the bas-reliefs by Giovan Battista Bernero were inserted portraying Santi Martiri e la città di Torino (The Holy Martyrs and the City of Turin) and the main Jesuit saints (Ignazio di Loyola, Francesco Saverio, Luigi Gonzaga, and Stanislao Kostka); the gilded, wooden statues of the virtues, attributed to Francesco Borelli, had already been placed in the niches at the beginning of the XVIII century. During the same years, Vittone planned the straightening of the front overlooking Via Dora Grossa according to the new prescriptions for the décor and the renovation of the oldest part of the city. Dating back to the 1760s is also the altarpiece behind the high altar, depicting the Santi Martiri e la Vergine (Holy Martyrs and the Virgin), which alternates, according to the liturgical periods, with the oval paintings of the Crocifissione (Crucifixion) and of St. Luigi Gonzaga.
Three important personalities of the history of Turin are buried in the church: Giovanni Botero (1544-1617), ex Jesuit and political writer, author of the XVI century Della ragion di Stato (The Reason of State); Giovanni Francesco Bellezia (1602-1672), brave Mayor of the city during the devastating plague epidemic of 1630; the philosopher Joseph de Maistre (1753-1821).
The Jesuit order was suppressed in 1773. Regaining possession of the church in 1832, they promoted the restoration of the main vault and dome in the 1840s, and Luigi Vacca replaced the deteriorated frescos of the vault and the dome. In 1848 the Jesuits were again expelled from the reign and it was only in 1894 that they once again took up residence in part of the block, and in 1916 were again given the church’s rectorate.
Since 2013 the church has been entrusted to the Community of Sant’Egidio, a secular movement recognised by the Holy See and which expresses Christian life through friendship with the poor, listening to the Word of God in personal and common prayer, and seeking peace as a personal attitude, as well as a commitment for the world. 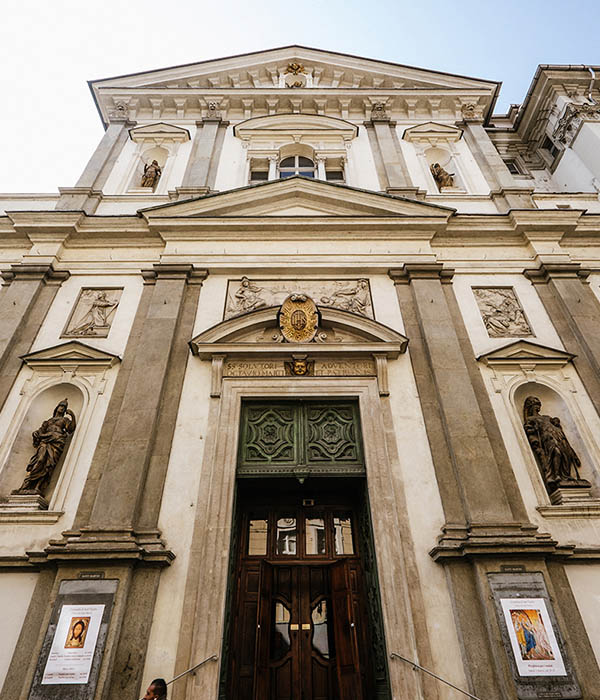 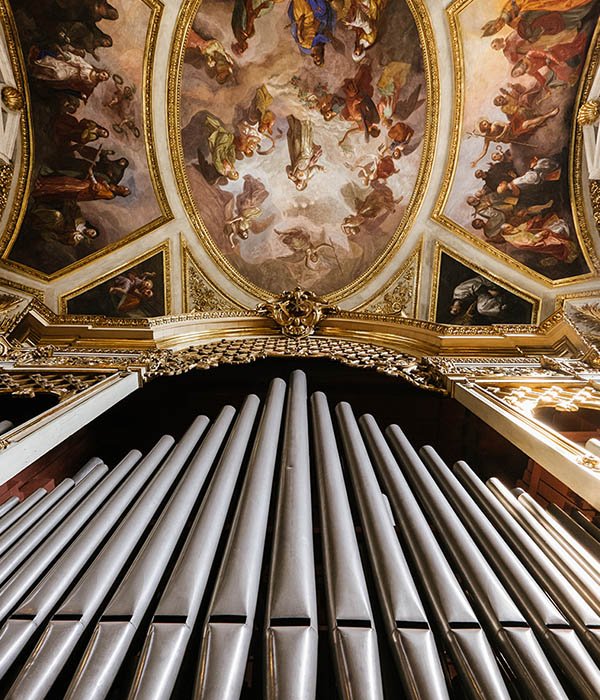 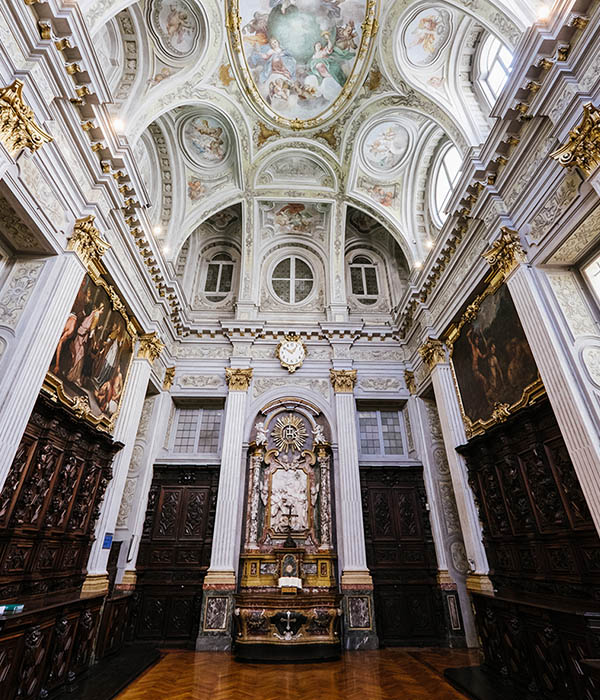 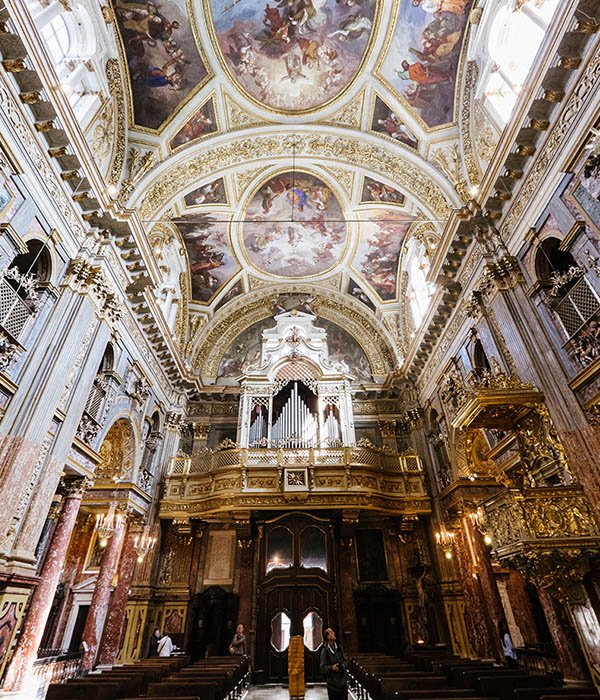 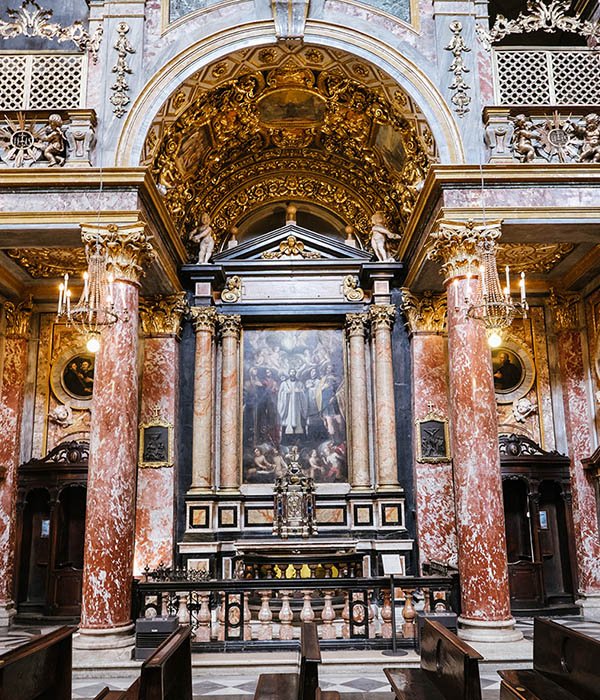 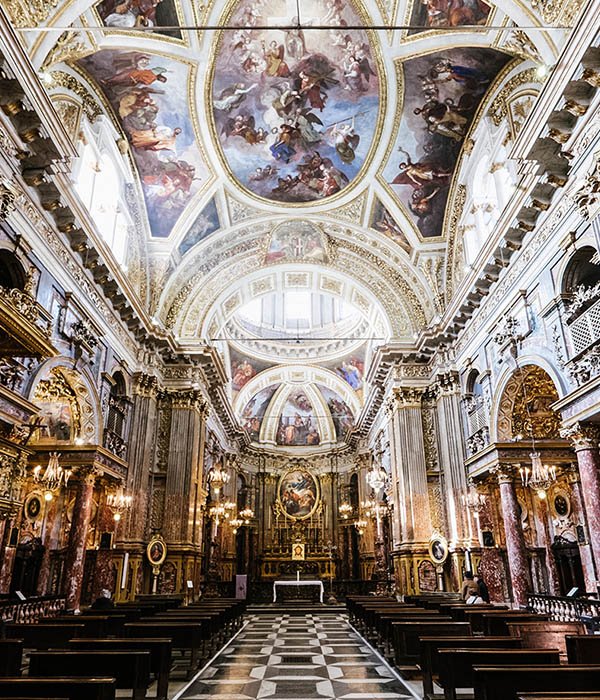 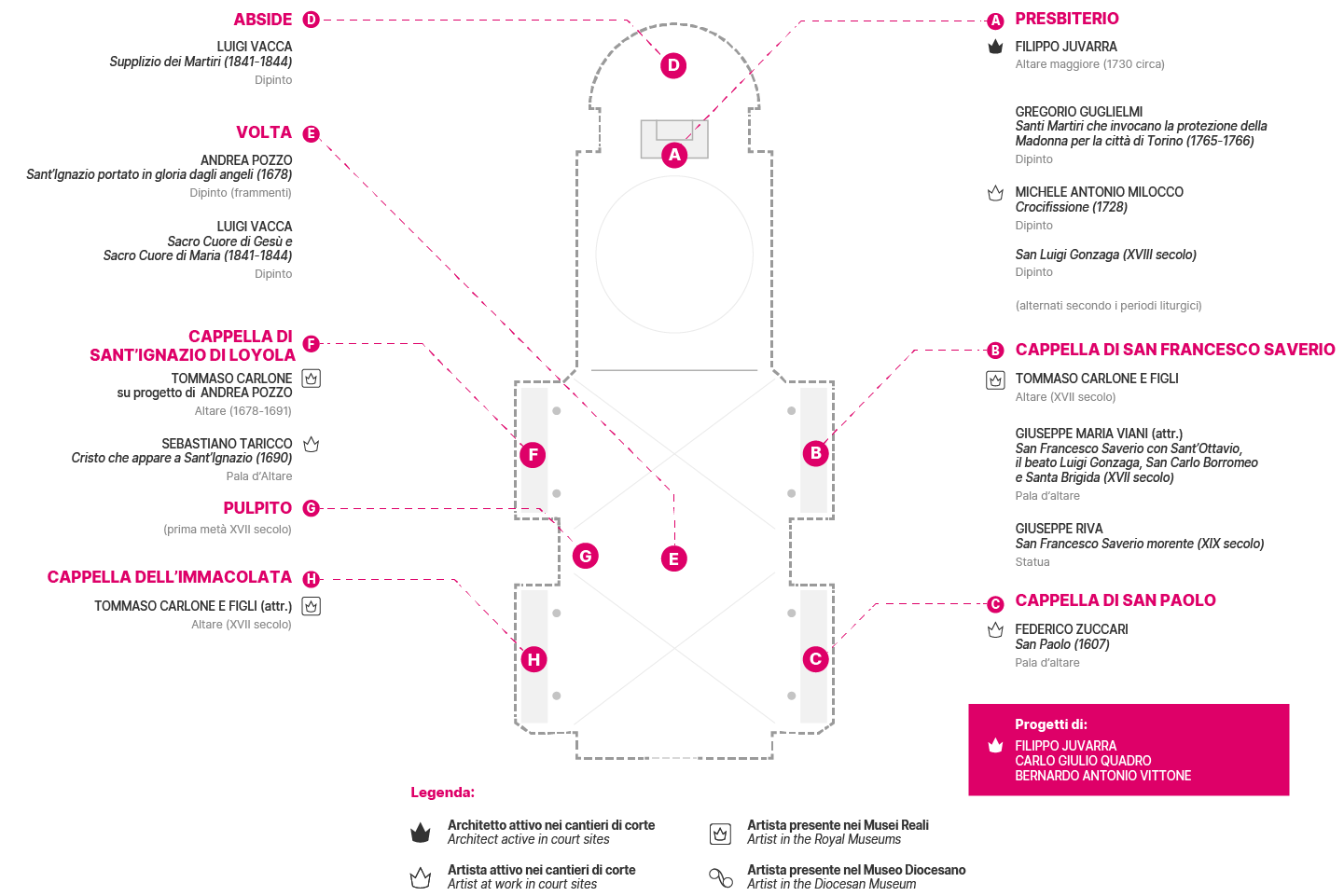