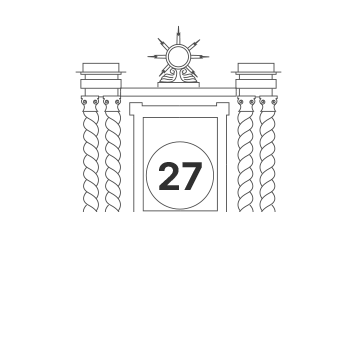 Unlike other religious orders, the Carmelitani Scalzi (Barefoot Carmelites) have no actual founder but are inspired by the life of the prophet Elijah in the desert– a model of prophetic and apostolic zeal. Already at the beginning of the XIII century a few hermits gathering in Palestine on the slopes of Mount Carmel decided to ask the Patriarch of Jerusalem for a “Rule of Life” founded on the model of the prophet Elijah’s.

In the following years, with the Muslim recapture of those territories, these hermits returned to their European countries of origin and adopted the rule of community life.
Work, prayer, silence, and obedience are the pillars of their life program. In the spirit of the Council of Trent, on 24th August 1562, Santa Teresa d’Avila (St. Theresa of Avila) started the Carmelite reform with the enclosed nuns.
In 1568, San Giovanni della Croce (St. John of the Cross) started to reform the male branch of this order, divided in 1593 into the two families of the “calzati” (with footwear) and the “scalzi” (barefoot). The ‘barefoot’ Carmelites initially took residence in Genoa in 1584 and from here spread to the whole Italian peninsula. In 1622 – under the reign of Duke Carlo Emanuele I of Savoy– they arrived in Piedmont from the convent in Genoa. During the first twenty years of their presence in Turin, they did not have the chance to use a stable location to establish their monastery. In 1642, Madama Cristina of France, widow of the Duke of Savoy and regent on behalf of Carlo Emanuele II, granted the Barefoot Carmelites a site on which they could build their church and monastery of Santa Teresa (St. Theresa), putting the Carmelite friar Andrea Costaguta in charge of the plan.

The works, begun on 9 June 1642, ended in 1647 under the direction of another Carmelite friar, Father Alessandro Valperga. The development and embellishment of the church continued in the meantime for the whole remaining part of the XVII and the following century. The religious devotion of the most important families of the subalpine aristocracy was expressed through the artistic prestige of the works they promoted, such as the façade – inaugurated in 1746 – wanted by the archbishop of Torino Cardinal Giovanni Battista Roero, whose funeral monument is located in the left aisle. The XIX century is instead the century of adversities, both for the monastery and for the Carmelites, with two subsequent suppressions of the order: in 1801 (Napoleon) and in 1855 (Kingdom of Sardinia), with the relevant confiscation of church property. During the Napoleonic occupation, Santa Teresa, the mortal remains of Madama Reale Cristina of France (still preserved in the church), and of the blessed Maria degli Angeli (now in the monastery of Moncalieri, founded by her) were moved from the church of Santa Cristina in San Carlo Square. The bombing of the city caused heavy damages to the religious complex, on which restoration was performed already in 1943-1947.
The building has the shape of a Latin cross with a single nave covered by a barrel vault. On the right: the chapel of Santa Teresa del Bambino Gesù (St. Theresa of the Baby Jesus – formerly of the “Addolorata” – “Our Lady of Sorrows”), where a XVIII century Pieta is preserved, formerly the altarpiece; the chapel of San Giovanni della Croce, with a marble altar of the XVII century and the painting by Peruzzini (1629-1694) above it, portraying the saint.
On the left: the chapel of Saints Gioacchino e Anna (Joachim and Ann), with the font in a niche; the chapel of the Madonna del Carmine, on whose right wall is a precious XVII century painting by Bartolomeo Garavoglia, portraying Santa Teresa d’Avila (St. Theresa of Avila); the chapel of the Crucifix, on whose marble XVII century altar is a wooden crucifix attributed to Stefano Maria Clemente (1719-1794). At both ends of the transept one can admire the two elements that characterize the church: the chapels planned by Filippo Juvarra. On the right, the chapel of the Sacra Famiglia (the Holy Family), whose altar by Juvarra is decorated with marble angels and cherubs that frame the altarpiece, which represents the Sacra Famiglia, a remarkable painting by Sebastiano Conca.

The fresco of the vault (1878) is by Rodolfo Morgari, while on the lateral walls the XVII century painting Disputa di Gesù con i dottori and Fuga in Egitto (Dispute of Jesus with the Doctors and the Escape to Egypt) can be admired. On the left, the chapel of San Giuseppe (St. Joseph), with one of the best baroque altars in the city. The chapel’s architecture was planned from 1733-35 by Filippo Juvarra, upon commission by Polissena d’Assia, wife of Carlo Emanuele III. The main group San Giuseppe in gloria con Gesù Bambino (St. Joseph in Glory with the Child Jesus – 1736) is the work of the sculptor Simone Martinez, crowned at the sides of the basin by the allegorical statues of Faith and Charity. Corrado Giaquinto is the painter behind the fresco of the vault with the Trinity and the two paintings – the Fuga in Egitto (Escape to Egypt) and Transito di San Giuseppe, visible on the sides of the chapel, dating back to 1735-39. The two side doors (1745) are a masterpiece by Pietro Piffetti, finished with inlay work of rich woods, ivory, and mother of pearl. At the centre of the presbytery is the high altar, from 1681 but reworked in 1844. Also worthy of consideration is the altar frontal, with stucco inlays showing the Immacolata (Immaculate) within a peculiar interlace decoration. The altarpiece with the Trasverberazione di Santa Teresa d’Avila (Trasverberation of St. Theresa of Avila – 1640), now at the end of the apse, is attributed to Guglielmo Caccia, called the Moncalvo. Another painting of remarkable interest is the Ascensione al cielo di Elia (Elijah’s Ascension to the Sky), preserved in the left part of the choir.
The confessionals and pulpit are an essential part of the church architecture, fundamental elements of the post-Council of Trent pastoral based on the relationship between sermon and individual confession.; the wooden furnishings and sacristy dating back to the end of the XVII century, are the work of a friar cabinet-maker who resided in the monastery.
The convent and whole block were seriously damaged by bombs during World War II, explaining why the building is now in a completely different context from its original setting, which was rebuilt during the years of post-war reconstruction,.
Santa Teresa has recently found new fame for being the church celebrating the marriage between Giovanni Carlo Bergoglio and Rosa Vassallo, grandparents of Papa Francesco (Pope Francis), and in 1908 the pope’s father Mario was christened there. 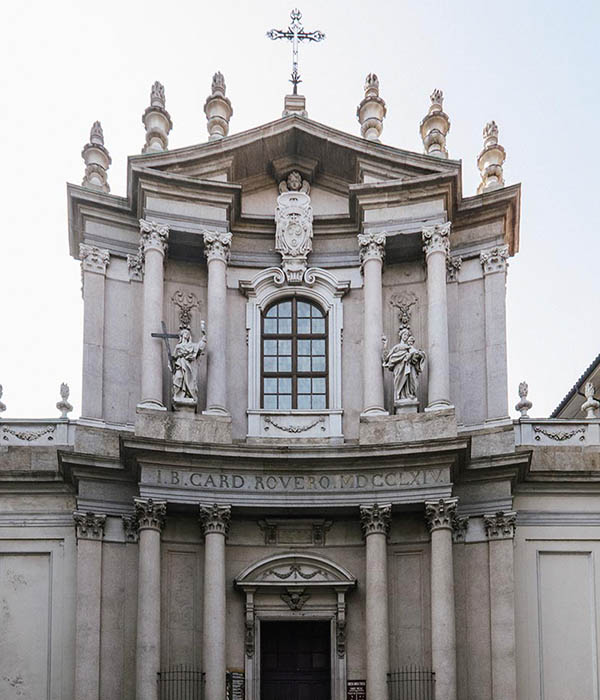 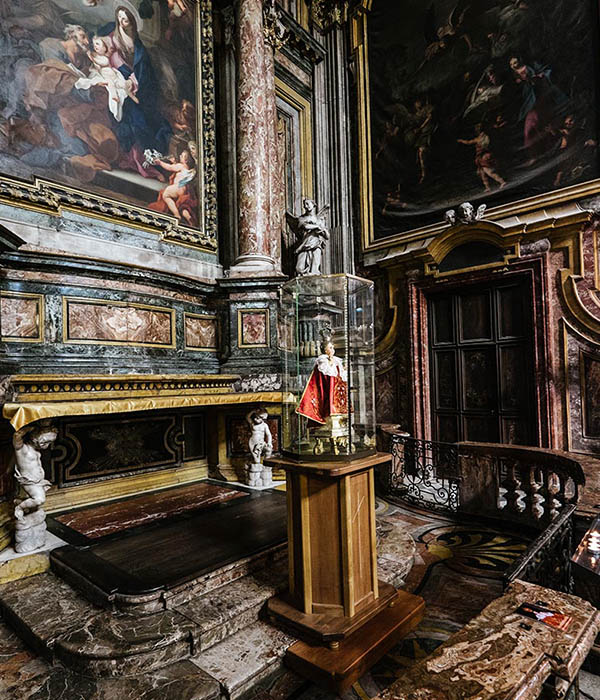 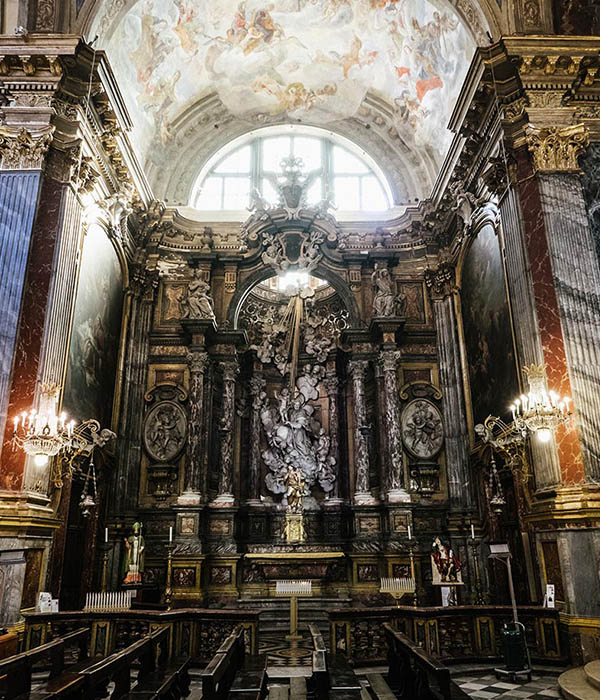 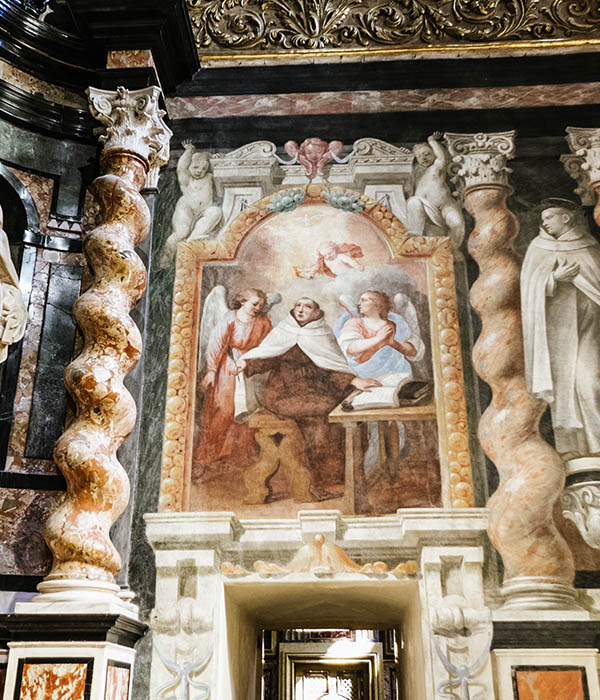 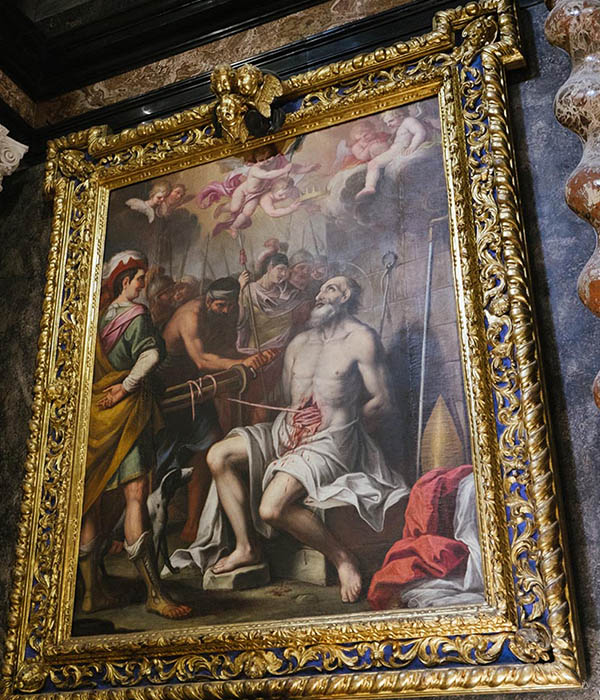 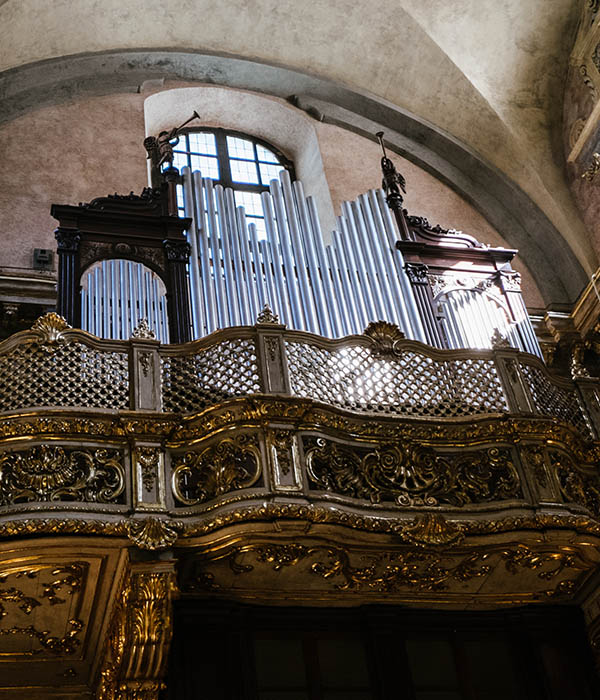