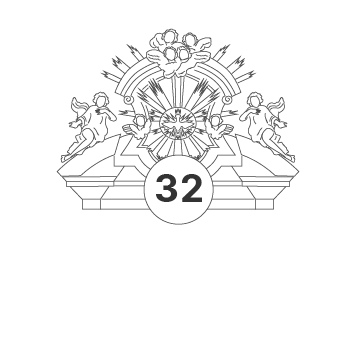 Part of the large convent complex officiated by the Canonichesse Regolari Lateranensi dell’Ordine di Sant’Agostino (Canonesses of the Order of St. Augustine), Santa Croce church was built between 1718 and 1730 according to a project attributed to Filippo Juvarra.

The canonesses at first reside in Turin’s centre where the church of Misericordia is now, then move to the ‘città nova di Po (new Po city)’, into the building constructed between 1685 and 1691 in the south-east area of the square considered to be the hub of east-bound expansion. The project was coordinated by Amedeo di Castellamonte in the second half of the XVII century. The square was originally designed as an octagon and then turned into a ‘square shape’. It was created to be a place of celebration for Duke Carlo Emanuele II and modelled on the French place royale, delimited by buildings of the same style with the monument of the sovereign in the centre.

The monastery takes up two thirds of the block marked by the current Carlo Emanuele II square and via Accademia Albertina, via Giovanni Giolitti, via San Massimo and via Santa Croce and was the result of various construction yards up to the end of the 1800s. Inside the convent the way space is distributed and used reflects the nuns’ activities, engaged in teaching young ladies from aristocratic families.
The church was built roughly thirty years after the convent in a corner of the land lot probably meant for the chapel. The design is attributed to Filippo Juvarra, who worked on it from 1718 to 1719, just a few years after his arrival in Turin in 1714, developing the theme of a centrally planned church. The hall has an elliptic form, marked by eight columns in giant order in Gassino marble with Corinthian capitals supporting the trabeation. The oval shape is repeated near the dome drum, spaced by large windows surmounted by a broken pediment.
The double calotte dome’s is exquisitely decorated with lacunars which ideally extend the lower level design and reach as far as the lantern, a slender structure qualified by high and narrow openings. The entrance is on the main axis, continuing behind the high altar where the choir is, according to Augustinian rule; a large rectangular apsidal space connected to the corridor of the convent by stairs.
The external façades facing the square and Via Accademia Albertina are set with pilaster strips of giant order placed on a high base, supporting a simple and linear entablature.
The façade, visible from the front for those arriving from via Po and from the corner if you reach the square from the lateral roads, is of one order only, the entrance aligned with one of the large windows of the dome drum and two niches devoid of statues on the sides.
Inside, the three altars were designed by Juvarra in 1730 – his last great work, although he was not able to see construction finished. The bell tower was in fact based on a project by Giovanni Battista Borra after 1756 and the façade is the result of XIX century work carried out after 1873 according to a solution indefinitely attributed to Camillio Riccio.

The high altar, built on a definitive 1731 project by Giovanni Pietro Baroni di Tavigliano, is made up of an aedicule on composite columns in polychrome marble, set into wide pilasters; the altarpiece, commissioned by Juvarra to the court painter Carlo Francesco Beaumont, portrays the Deposizione (Deposition) (1731). Two chapels open out on the sides of the hall, alternating with four choirs placed diagonally, containing two identical altars, with an arched altarpiece each, framed by pilaster strips ending with cherubs, wings folded, holding a trabeation decorated with a frieze; two puttoes lean on the trabeation holding a wreath. The Natività (Nativity) by Giovanni Battista Brambilla appears on the right, dating back to the second half of the XVII century. The altar on the left, dedicated to San Pietro is completed by the altarpiece San Pietro in cattedra by Guglielmo Caccia, the ‘Moncalvo’, painted for the previous church of the Canonichesse Lateranensi (Canonesses of the Lateran) at the beginning of the XVII century.
The nuns’ choir, coeval with the church, is adorned by two frescoes by Charles Andrée van Loo, who was also active in the Palazzina di Caccia di Stupinigi (Stupinigi Hunting Residence), featuring Eucharistic themes: L’Ultima Cena (The Last Supper) and la Moltiplicazione dei pani (Feeding the Multitude, 1732 ca). As well as other XIX century works of art, the choir also houses four statues of saints, Agostino, Patrizio, Frediano e Ubaldo (Augustine, Patrick, Fridianus and Ubald), tied to the history of the Canons Regular of the Lateran in various ways.
The XX century again changed the use of the area; it was chosen to be a military seat and then granted to the university of Turin. During the century the church was renovated and restored several times. Over the last few years the whole structure has been consolidated and the exquisite decorations of interiors have been highlighted, returning the extraordinary and long-hidden treasures to the city once more. 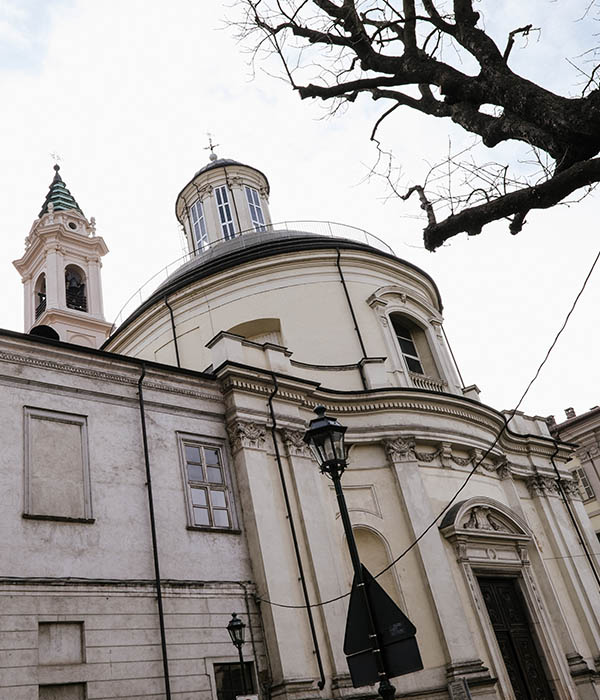 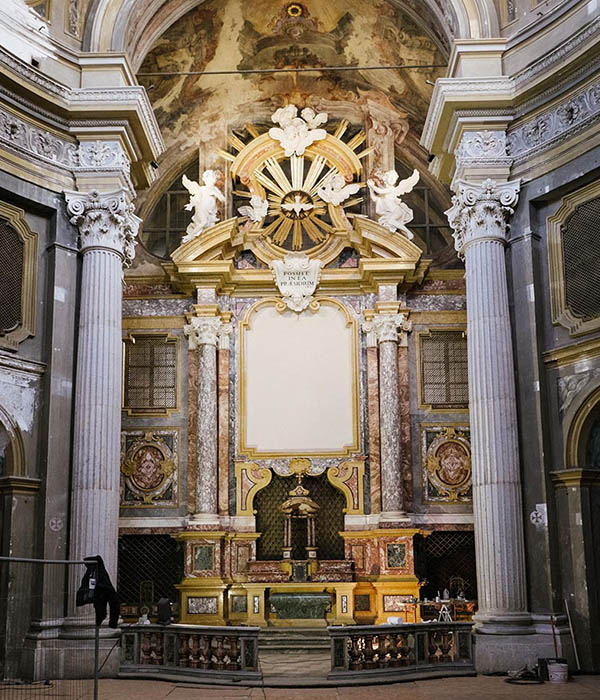 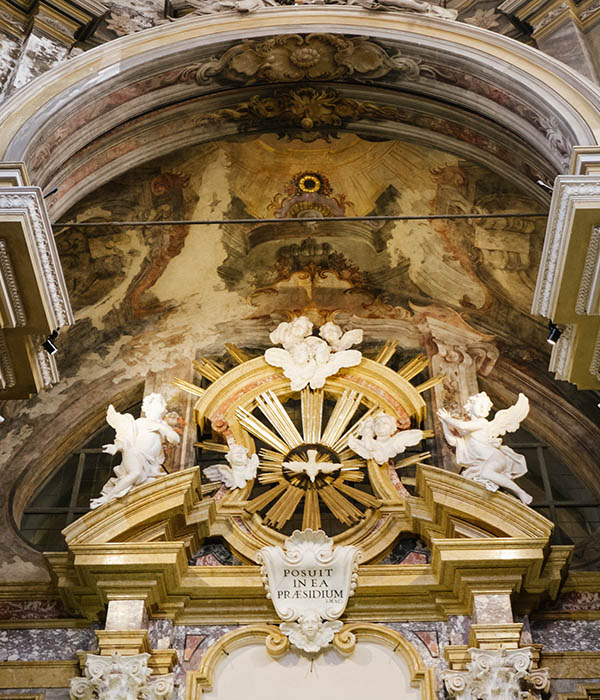 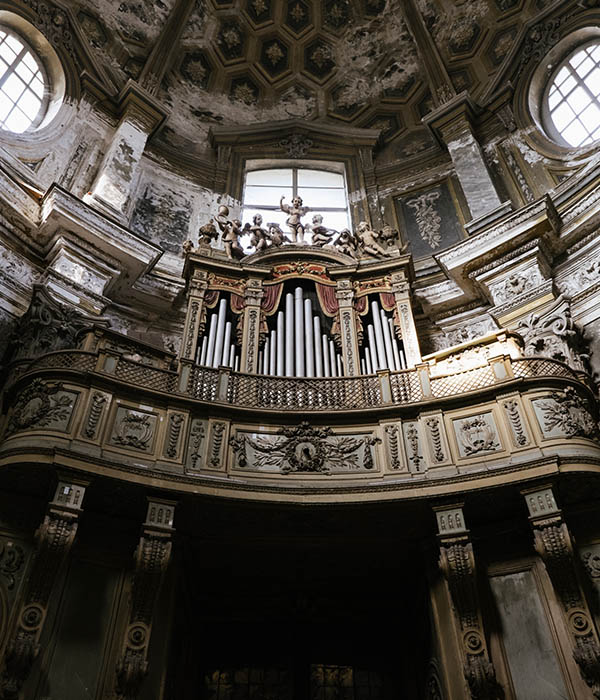 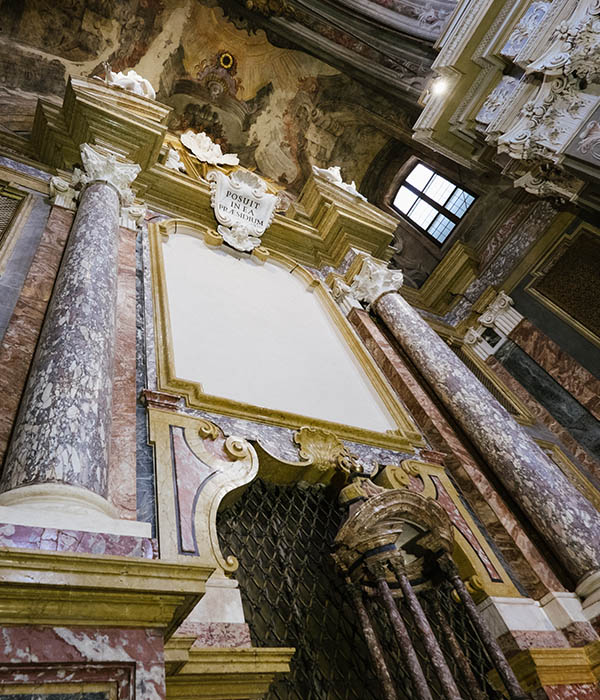 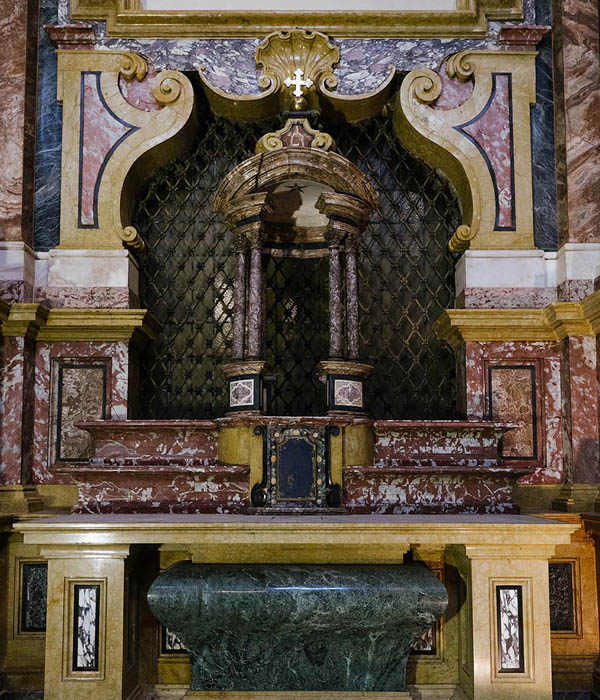