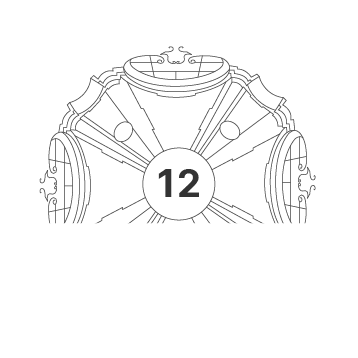 The present church of Santa Chiara, previously part of the convent of the Poor Clares, lies on a much older foundation: placed in the current area at the latest in the fifteenth century, behind the medieval walls, with the church already on the corner of two streets, the monastery gradually expanded over the centuries to incorporate the entire block at the end of the eighteenth century.

Extensions gradually cancelled older traces of buildings, including the early church, which between 1742 and 1746 was rebuilt from the ground up. Except for some amendments and additions, the eighteenth-century church corresponds to the current one. The project created by Bernardo Vittone (1705-1770) has nothing to envy the probably far more modest building that it replaced. It is one of the most important projects by the Turin architect and we know from drawings and engravings that he had prepared no fewer than three different variants for the church.
As is the norm for women’s convent churches, Vittone drew a building consisting of two distinct parts: the public church, an intimate space with a central plan, and the spacious chancel for the cloistered nuns, where the architect proved his expertise in creating bright, living spaces suitable for everyday life.

The two spaces in fact correspond with different objectives and uses. The public church did not need to be large, or to accept a whole community, as in the case of parish churches. Vittone thus gives it a centralized form, with a strong vertical development and a dome set on four pierced pillars (each pillar made up of a “cage” of four pillars, holding a small chancel on the upper level). In fact, the entire structure is made up of a double casing, which gives transparency and lightness to the whole, but also has an important weight distribution function. In addition to the small chancels, a double structure is used in the upper sections, creating a corridor that runs around the base of the dome and accessible to the nuns, so that they could look out on the space from above. Thanks to the remarkable vertical structure the church rises over the roofs of the dense old city, and captures strong beams of light which spread down evenly, softened through the numerous openings. Even the symbolic value of this light is emphasized by a number of cartouches in stucco at the level of the dome, where with emblems and Latin mottos the concept of claritas is developed: and so the brightness, fame, and name of the saint to whom the church is dedicated ideally coincide.
The interior is simple, as is right for a church of this order devoted to poverty. The late nineteenth-century, slightly stiff marble altars (Vittone’s have been lost), do not do justice to the softness of the eighteenth-century stucco decoration and the elegance of the frames, moldings, walls of compartments, originally painted in light colors. Only the back wall, which separates the church from the chancel, was covered from the outset in polychrome marble (the current ones, from the twentieth-century renovation, are painted in trompe l’oeil).
But the church is only half the work: two modern doors, replacing openings once protected by metal grilles, provide access to the cloistered nuns’ chancel. Though the church was inaccessible to the nuns, the chancel was a place of daily life for them, and Vittone makes it double in height, placing it among loggias and elegant balconies, which turn it almost into a covered square.’. To the north the loggias form a ‘buffer’ space that allow the chancel not to be overlooked from the road; to the south, they open directly onto the porches of the great cloister, which catches a direct and intense afternoon light. A fine stucco decoration runs the length of the lunette vault. On the ground floor, marred by some incongruous partitions, the quality of the original space is also compromised due to the lack of the wooden chancel, removed in the early twentieth century.

In the long period of suppression (late eighteenth century – mid nineteenth century) the story of Santa Chiara is partially out of step with those of other religious complexes. In 1802 the convent was formally abolished, but it remained in use and at the disposal of the public authority that intended to use it as a shelter for nuns coming from other monasteries. There was therefore no real abandonment. After the Restoration the Clarisse was restored, and ceded shortly afterwards (1824) to the Visitation nuns who lived there for about a century. At this time the altar was first reconstructed in its present form, although all material traces of the Visitation order have now been lost. The convent and church were in fact abandoned in 1904, when the Visitation nuns gave the building, after a long standoff (or rather, passive resistance to the Siccardi laws which lasted forty years), to the municipality of Turin. The church was then stripped of all its fixtures and furnishings, in anticipation of its demolition. The building was eventually saved from demolition at the eleventh hour to be included in the lists of listed buildings.
The church underwent restoration from the 1930s, when it was re-consecrated and purchased by the order of the Piccole serve del Sacro Cuore di Gesù, who still own it. Belonging to this period (1937-1942) are the altars, which are copies of the nineteenth-century ones removed in 1904 and replaced in the church of the Visitazione di Corso Francia, and all interior furnishings. The altarpiece on the high altar, depicting the Sacro Cuore di Gesù nell’apparizione a Santa Margherita (Jesus appearing to St. Margaret) is by the painter Nichola Arduino (1887-1972). The façade deserves a final mention: right on the road and two orders, a little marred by plaster and modern colors and only visible up close because of the limited available space. In boosting the curve of the dome with diagonal cuts at the top of the front, Vittone may have referred to the facade of the Roman church of San Biagio by Carlo Fontana. The experience gained by Vittone working under Juvarra is instead felt in the overall plan of the church and chancel: the architect had in fact drawn on similar programs working in the projects of women’s convent churches of Santa Croce in Turin and Sant’Andrea in Chieri.

Texts by the Guarino Guarini Association 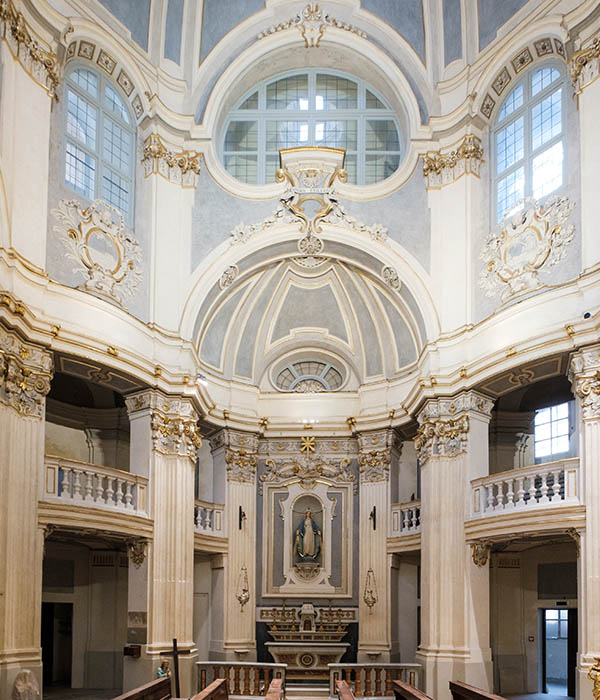 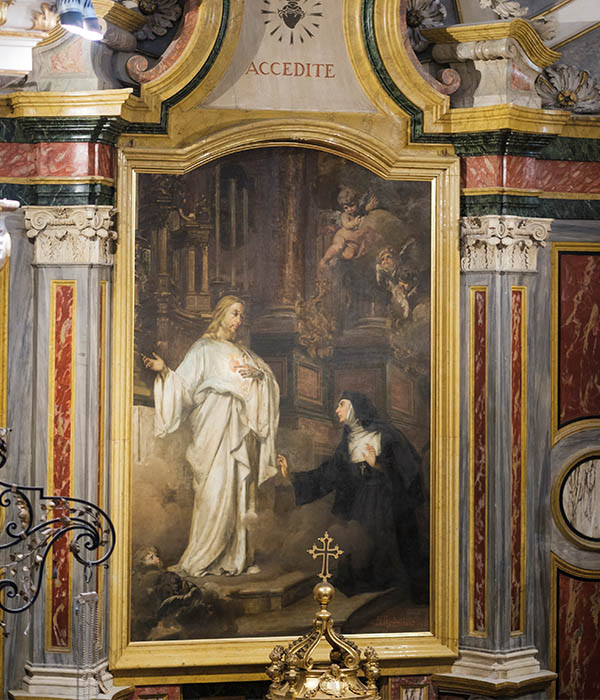 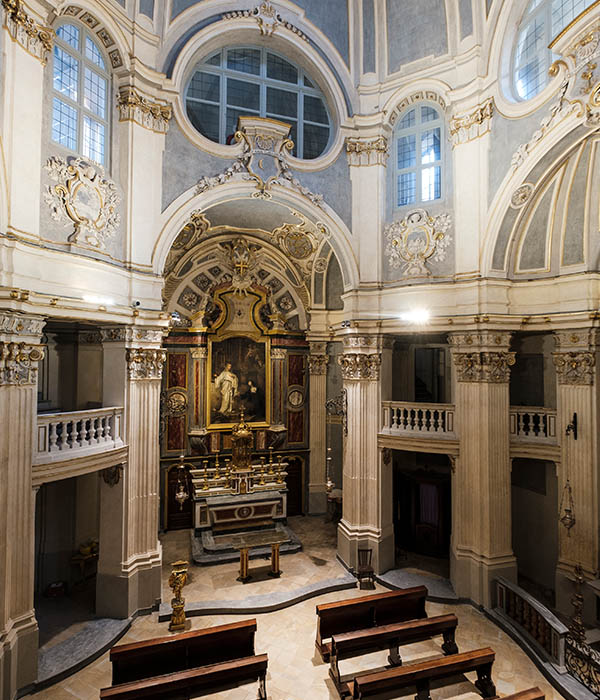 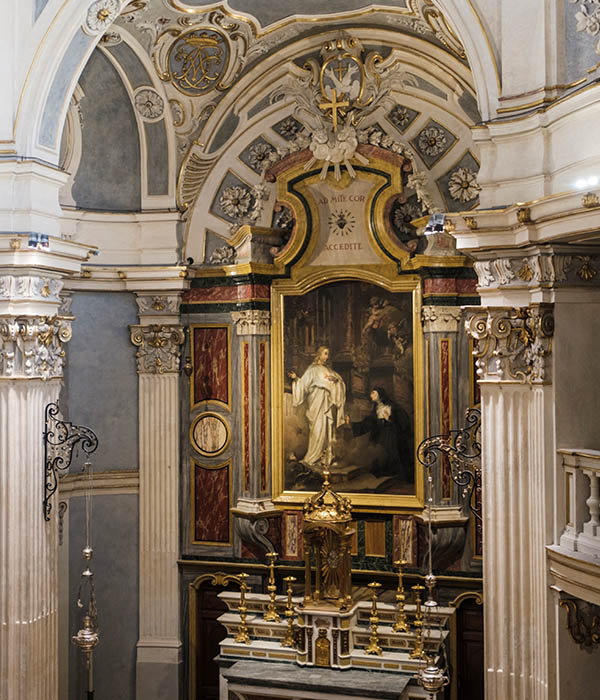 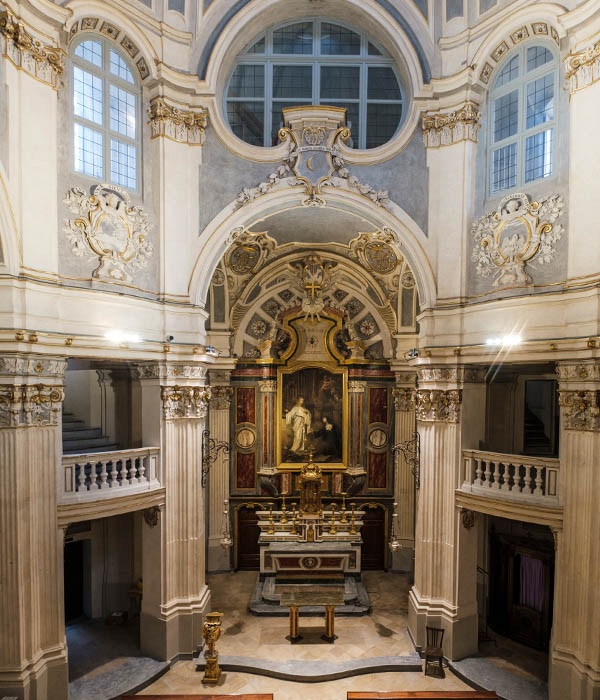 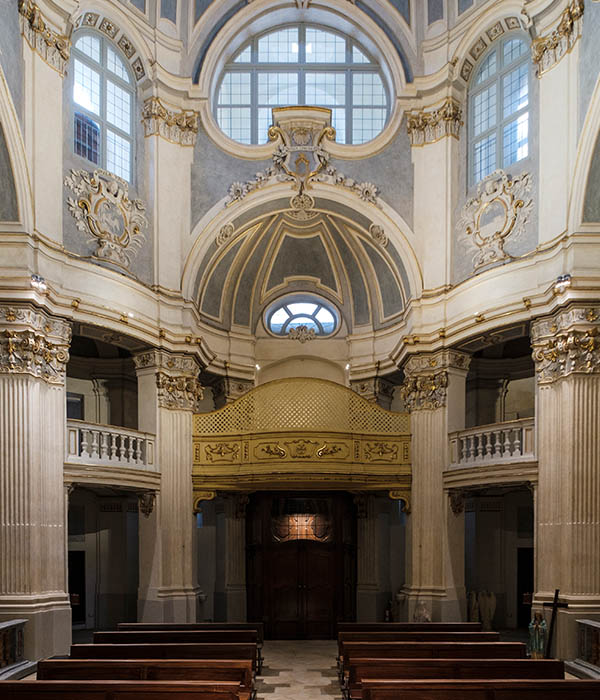