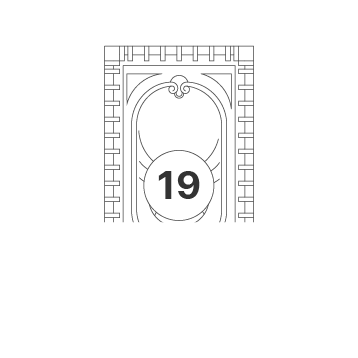 Established in the mid-twelfth century, St. Thomas was one of the most populous parish churches in the medieval city; built along the ancient Roman cardo, it was responsible for a large part of the Porta Marmorea district. Following a collapse in 1445, the church was rebuilt, keeping its longitudinal plan with three naves.

The Franciscan community of Friars Minor of the Observance, housed in the building since 1536, took over the care of the parish in 1575 and started key extension works in the last decades of the century. The new building was consecrated in 1621, but was seriously damaged in 1698 by the explosion of the nearby powder magazine. Five years later, the site was entrusted to Agostino Rama, who started building a new dome. In 1801, under the Napoleonic government, the monastery was suppressed but on the return of the Savoy dynasty it was enlarged to encompass an entire block; inside were housed about one hundred friars. Legislation enacted in the years of Italian Unification then imposed a complete abolition, while also reducing the liturgical life in the church.

In the late nineteenth century the City of Turin began to discuss the rearrangement of so-called “old central districts,” at the time in bad condition and unhealthy, considering the creation of a new “Diagonal Avenue” named Pietro Micca between the current squares Castello and Solferino, as part of a larger project that would connect the city centre with a new railway station. Supported by the expropriation laws, the Municipality was able to initiate a large urban plan aimed at the restoration of the whole area for reasons of “hygiene, roads conditions and aesthetics.” The new route, however, would cut off St. Thomas Church, imposing demolition. The City Council discussed the total demolition of the church at length, but in 1895 a decisive intervention by the architect Carlo Ceppi (1829 to 1921) allowed him to retain some of the existing building, changing the church plan from a Latin cross to a Greek cross, while also maintaining the bell tower. Ceppi drew a new design, which was then concluded in 1898, crowned with a curved façade set with two niches on the sides of the entrance in which the statues of St Francis and St Anthony of Padua, which had been on the façade of the previous church, were placed.
Inside, the altar marbles, renovated in 1838, are from the previous seventeenth-century high altar. The pulpit, made in walnut, was made in 1724 by the carpenter Carlo Maria Ugliengo. On the left side of the hall there is the altar of the Mary Immaculate. The central painting – depicting the Virgin and St. Bonaventure, St. Bernardine of Siena, St. Lucia, St. Agnes and other saints – is the work of the famous painter Enrico Reffo (1831-1917), a central figure of Turin sacred art in the late nineteenth century.

On the right wall of the transept, the unusual iconography on the altar of the Crucifix shows an angel pouring the Blood of Christ from a chalice onto the souls in Purgatory, located at the foot of the cross. Next, the Santuario di Nostra Signora del Sacro Cuore is the outcome of a project by architect Giuseppe Gallo (1860-1927), a capable interpreter of the eclecticism culture prevalent at that time. The chapel, consecrated by the Archbishop Cardinal Augustine Richelmy on the 2nd May, 1900, was requested by Father Bonaventura Enrietti in fulfilment of the vow of a previous priest Turbiglio at the beginning of his incumbency of the church of St. Thomas in 1871, that he would spread the devotion of Mary under the title of Our Lady of the Sacred Heart, approved by Pope Pius IX in 1860. On the walls of the same chapel are painted the patron saints of the Franciscans; nowadays the altar is adorned with a statue, sent from Issodurn in France, which is much venerated by Turin residents, who call it Madonna dei disperati (Madonna of the Desperate).
In the main liturgical hall the organ, built in 1788 by Andrea Bergamo and Giuseppe Serassi, and originally placed on the left side of the high altar, is situated above the entrance, in adherence to a proposal by the architect Ceppi. 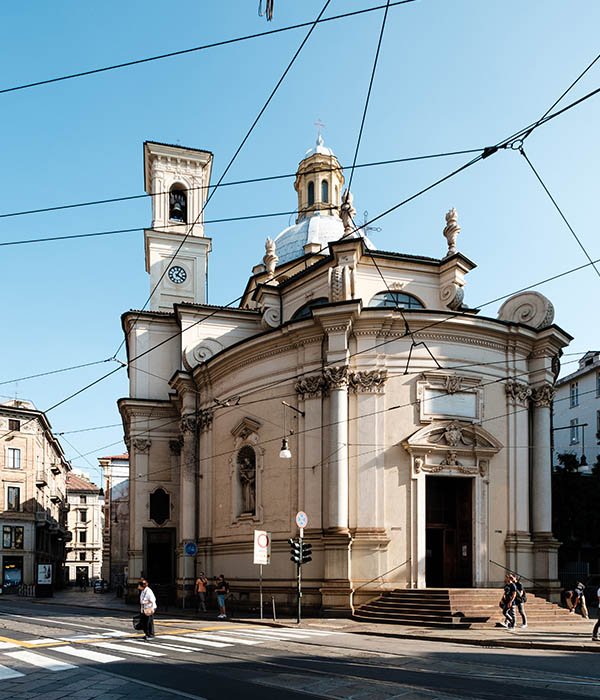 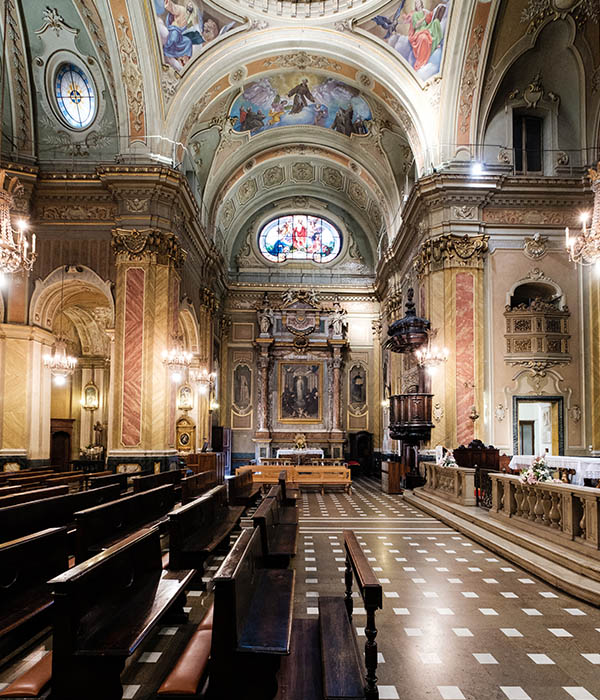 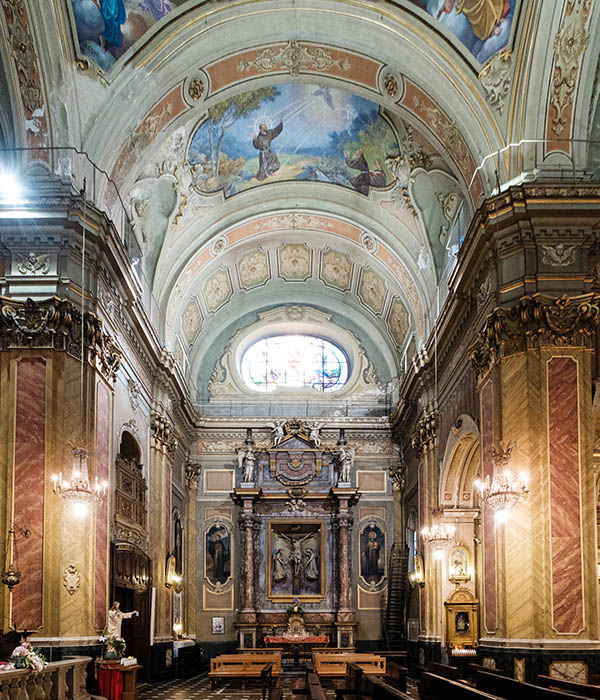 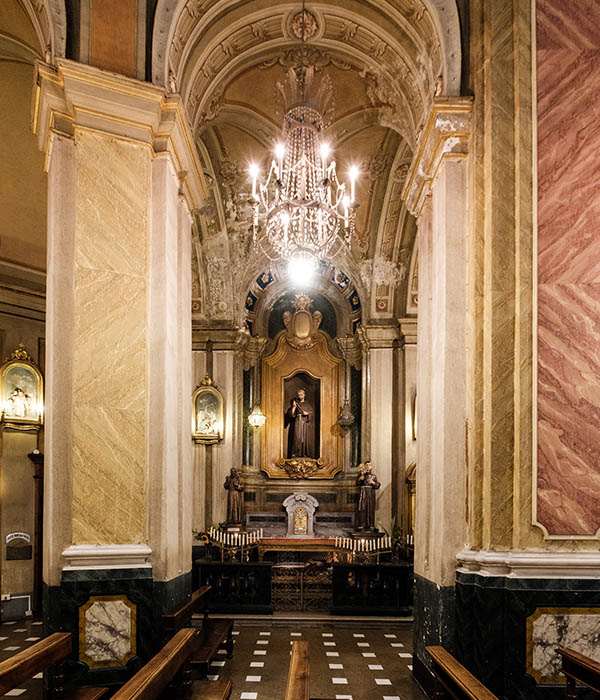 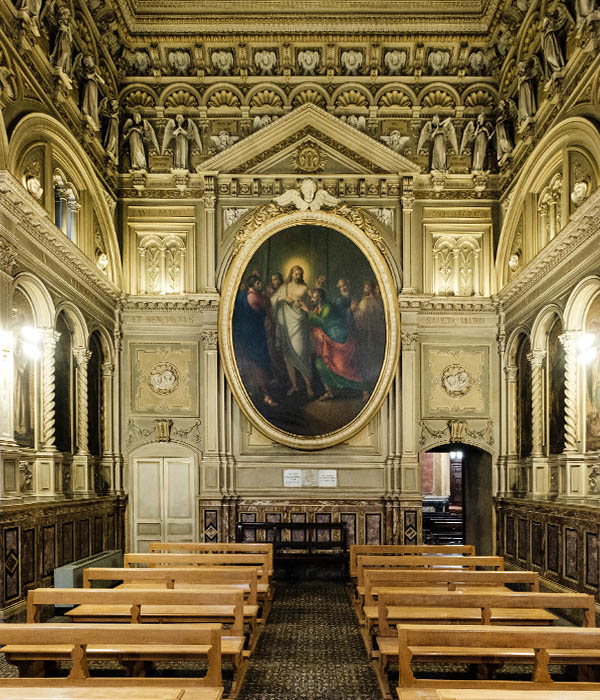 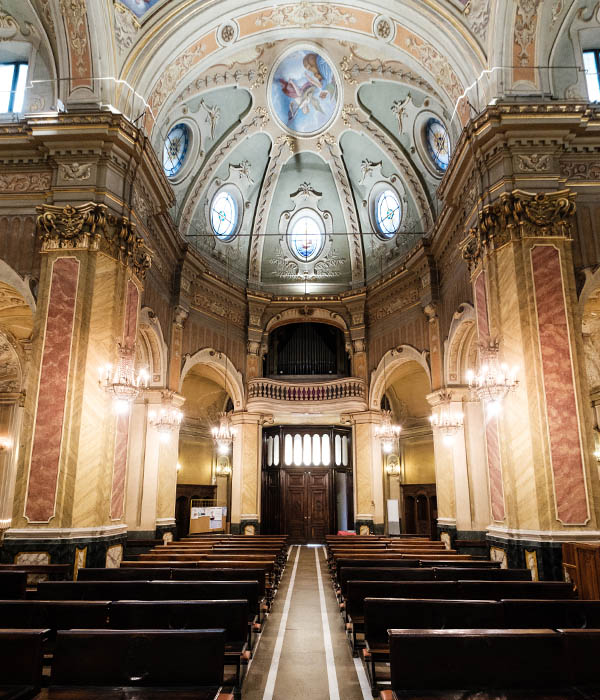