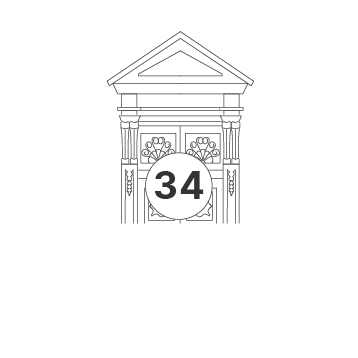 It was created to provide burial grounds for abandoned corpses while the Confraternita was given leave to officiate in the chapel devoted to Madonna delle Grazie (Our Lady of Graces) next to the parish of St. Gregorio, premises that soon became too limited for the rising number of confreres. Located in a central block of the city not far from the town belfry, St. Gregorio and the chapel were demolished and replaced by a single building divided by a longitudinal wall to be built according to a design attributed to the duke’s engineer Carlo di Castellamonte. Two distinct doors were planned on the facade, reserved for the parish and Confraternita, with at the centre a niche destined to contain the statue of St. Rocco.
In 1630 the plague once again swept the city and processions, offers and vows were made to the saint, protector of contaminated places, celebrated from the following year on 16th August.

After the suppression of the parish of St. Gregorio in 1662, the Confraternita set about re-establishing it and put their confrere Francesco Lanfranchi in charge of designing a new church. Building began in 1667.
The building follows a quadrangular plan with rounded corners, qualified by the presence of four robust corner pillars supporting four round arches. In each corner, pairs of marble columns placed on a high socle support a continuous trabeation which proceeds into the choir, creating a united space. The hall is covered by an octagonal dome and final lantern, decorated by stuccoes and frescoes, based on a high drum in which eight large rectangular windows open.
Work on the façade started in the XVII century but was soon halted due to lack of funds. Concluded in the last decades of the following century, it was then altered as part of large works of urban renewal in the city centre after 1885. The present façade was built by the municipality and is the work of Carlo Velasco, chief engineer of the office of Public Works. Featuring a double order, it is decorated by two niches holding two statues dedicated to St. Rocco and St. Espedito.
The exquisite internal decoration, begun in 1691 by the stucco-worker Pietro Somasso and then taken up again in the first half of the XIX century, is enhanced by recent restoration works aimed at a basic renewal of the whole structure.
Two interesting wooden confessionals grace the inner walls of the facade. In the right-hand chapel, the altarpiece by Giovanni Antonio Mari depicts the Natività della Vergine (Nativity of the Virgin) dated the second decade of the XIX century.

The wooden statue of St. Aventino is under the altar and in a niche on the side you can see the stone statue of the Madonna dellle Grazie (Our Lady of the Graces). The left-hand chapel boasts a valuable group of XVIII century wooden statues of Crocefisso (Crucifix) attributed to Stefano Maria Clemente (Crucifix only).
Designed in 1755, the magnificent high altar decorated with the statues of the four doctors of the church is the work of Bernardo Antonio Vittone. Inlaid polychrome marble covers the floor of the presbytery and continues into the choir, whose final layout dates back to the second half of the XVIII century and its current appearance is the result of recent restoration works. Gloria di San Rocco (Gloria of St. Rocco) was frescoed in the apse basin, by Rocco Comaneddi in 1791. On the walls of the apse, San Rocco predica agli appestati (San Rocco preaches to the plague-ridden) by Mari, San Rocco ritrovato morto nella prigione (San Rocco found dead in prison) by Tarquinio Grassi and the wooden statue of the Saint by Carlo Amedeo Botto. The wooden stalls of the choir sculptured in 1722 by Francesco Gilardi and Giuseppe Maria Bonzanigo are of exquisite quality. The sacristy has an interesting cupboard in walnut, inlaid with puttoes, wreathes and columns. In the nearby corridor we find a late XVI century marble basin, once used as a baptismal font. 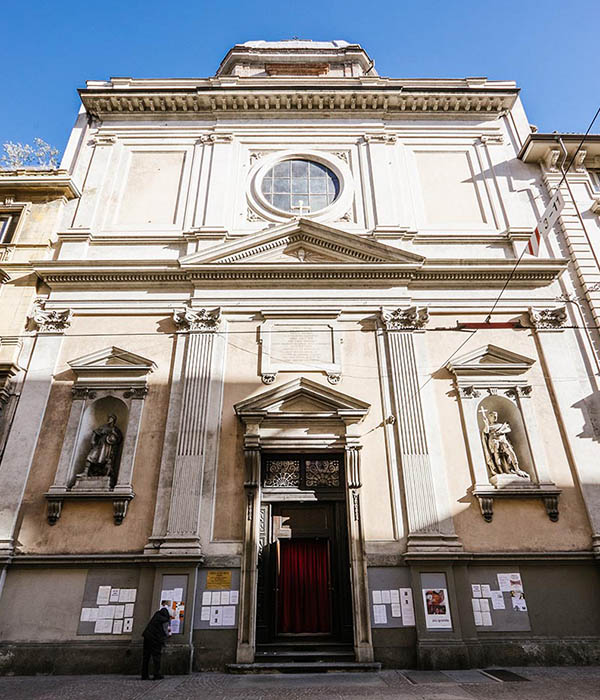 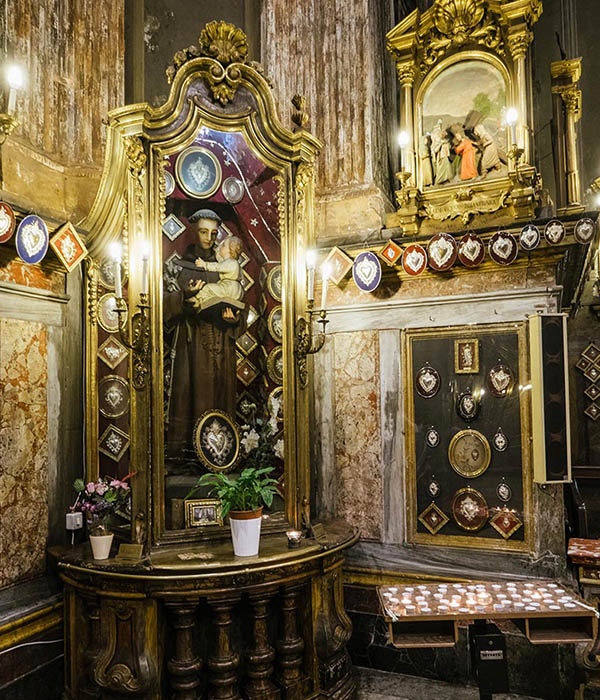 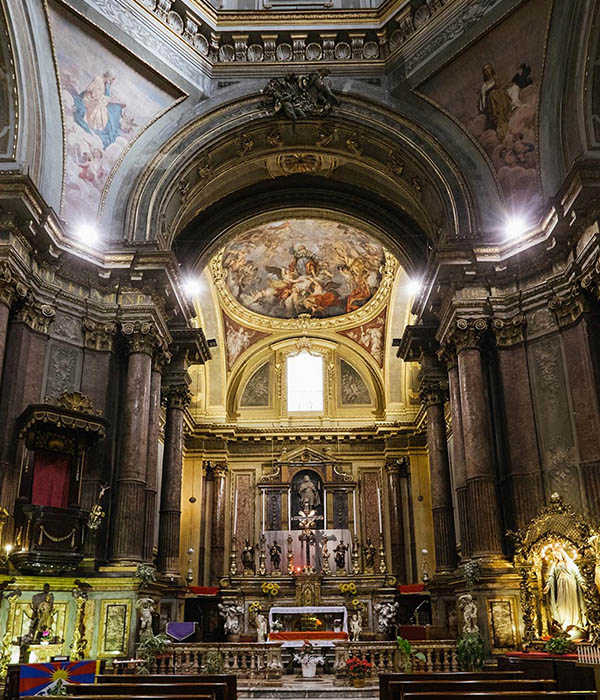 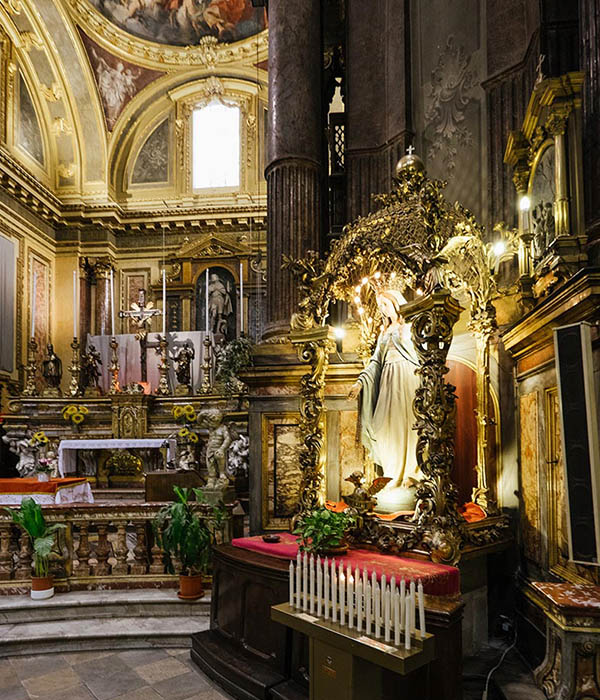 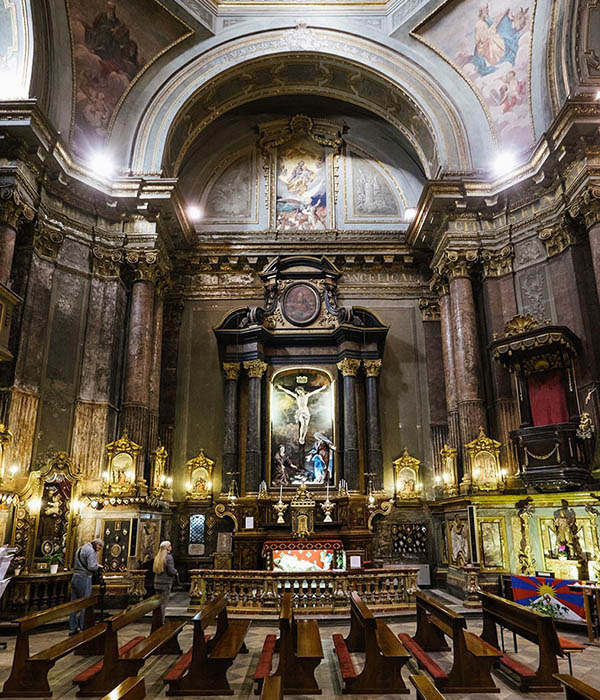 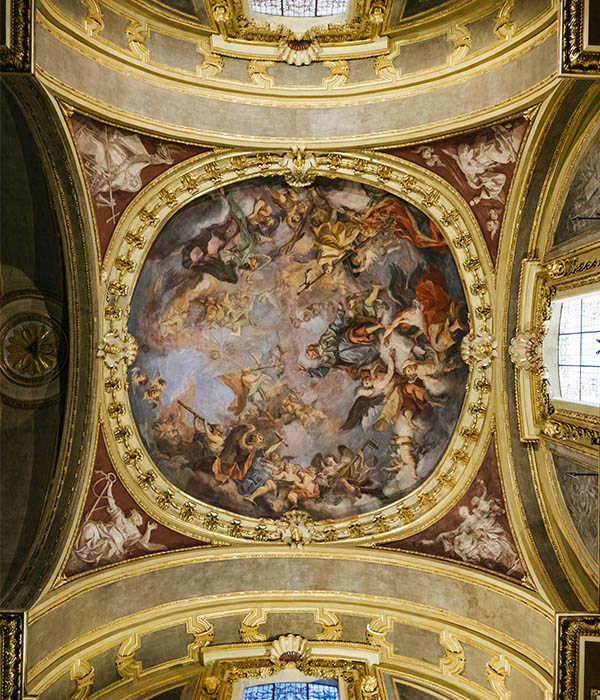