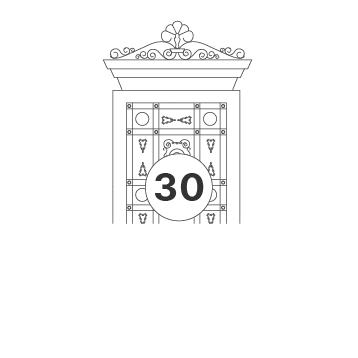 In the middle of the XIX century the “Borgo Nuovo” (the “new suburb”) was the growing quarter of Torino’s bourgeoisie, conceived as the southeastern extension of the baroque capital city on an area already occupied by urban fortifications (disused starting with the Napoleonic age).

In that zone, Carlo Alberto’s 1834 plan had already provided for an area to be destined to the parish church the rise in population convinced the City Administration to solve the problem by offering the area for free in 1843.
In April of the same year, a commission – appointed by king Carlo Alberto and presided by the archbishop Luigi Franzoni – decided to advertise a competition for the church’s plan, setting the conditions of its urban insertion: the building had to be isolated from the houses, occupying the entire lot defined by streets on three sides.

The church is dedicated to Massimo (St. Maximus), the first known bishop of Torino, documented between the end of the IV and the beginning of the V century. The building follows the XIX century custom of naming new parish churches after ethically exemplary saints in preaching and pastoral activities. The centrality of the theme is witnessed by the task entrusted by the City Council to the architect Carlo Promis (1808-1873), a primary figure in Turin’s cultural and artistic life, to choose both the name to be given to the parish church and to suggest the themes of the decorations. Behind the altar, the second iconographic plan by Sada, made in 1850, is San Massimo recitante nella Cattedrale al popolo di Torino (St. Maximus Recites in the Cathedral to the People of Turin), a work by Francesco Gonin (1853) that fills the apse with its scenography.
The church follows the architectural traits of European classicism. The main façade is characterized by an imposing Corinthian pronaos on columns and pilasters, a motif that is re-proposed, flattened, on all of the other street-fronts, connected by a continuous Greek cornice.
A light, ashlar-work covers the entire construction. The building, completed in 1853, appears as a construction volume that takes after the skyline of the near blocks, almost like a “palace” among the palaces, marked, however, by the space of the parvis and the emerging dome.

Among the eleven plans presented the choice fell on that of the architect Carlo Sada (1809-1873), drawn in collaboration with Giuseppe Leoni; construction works began in 1845.
The interior, in the shape of an elongated Greek cross, has a single nave covered by a barrel-vaulted coffered ceiling. The dome, resting on a columned drum, both inside and outside, covers the transept and lightens the central cross vault; in the dome, Dio padre in gloria d’angeli (God the Father in Glory with Angels) by Paolo Emilio Morgari. The interior has a complex iconographic program, with both Biblical themes (the statues of the prophets, made by Turin’s most important sculptors in Carlo Alberto’s time) and historical themes (the fathers of the church frescoed by Gonin in the dome’s pendentives, the saints Anselm of Aosta and Bernard of Menton in the lunettes of the lateral chapels, St. Epifanio and St. Vittore above the portal. To complete the program, on the left wall is a painting depicting the Natività della Vergine (Virgin’s Nativity) by Legnanino (1707, votive offering by the City after the victory in the siege of 1706) and, at the end, the baptistery made by Cesare Reduzzi. 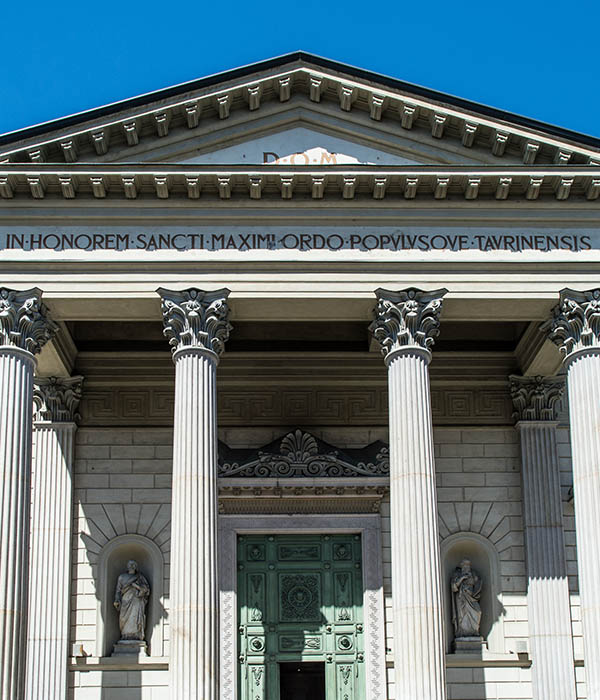 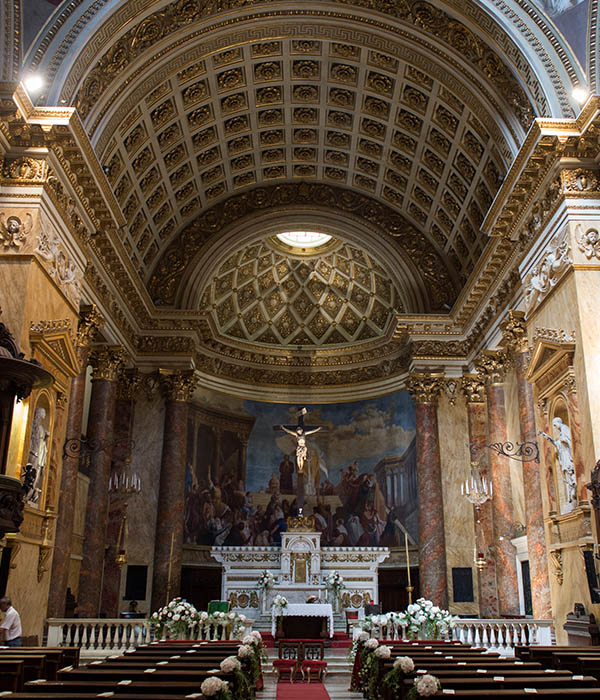 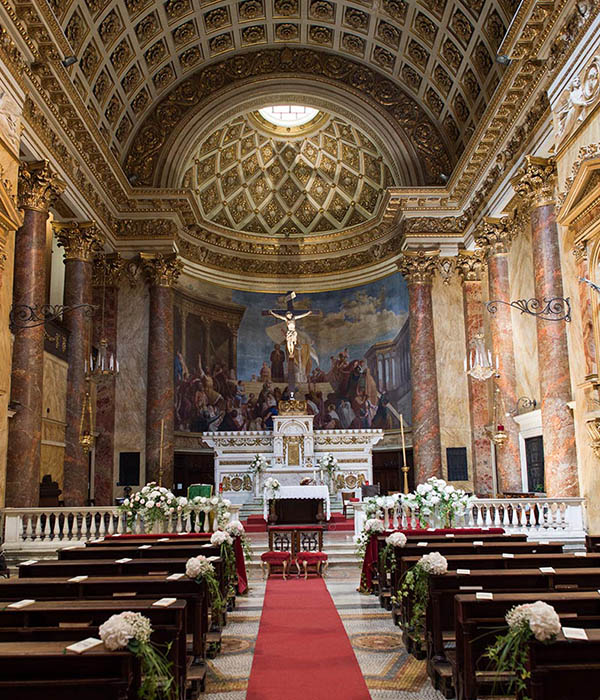