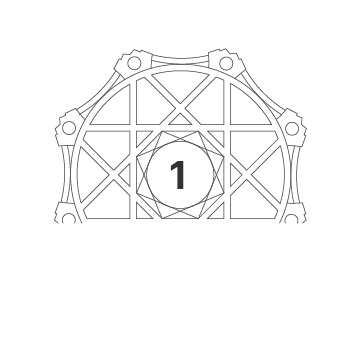 Duke Emanuele Filiberto had this church built in order to fulfill the vow made at the battle of St. Quentin, that took place on 10th August 1557, St. Lawrence’s day, an event which allowed the political re-establishment of the Savoy duchy.

On 8th February 1634, the Theatine Friars, an order of regular canons founded in Rome in 1524 by Cajetan of Thiene, were invited by Duke Vittorio Amedeo I to settle in the structure of the pre-existing chapel of Santa Maria del Presepio, which had taken the name Saint Lawrence in 1572 while waiting to fulfil full vow. The Holy Shroud was temporarily kept in this church after it was transferred to Turin on occasion of the pilgrimage made by the archbishop of Milan, St. Carlo Borromeo (1578). The Theatine Friars were ordered by the Duke to erect a “ majestic and magnificent’ church dedicated to St. Lawrence next to the Ducal Palace, but the construction was slow in getting started. Guarino Guarini (1624-1683), a Theatine friar and architect of European fame, started working at it in 1668, on the basis of his own new project. The church was inaugurated on 10 May 1680 and the mass was celebrated by the architect himself.

The building has no façade; although a plan by Guarino Guarini is documented, the monumental front facing the square was never made, since it would have modified the evenness of the adjoining buildings and would have competed with the ducal palaces: therefore, the church maintained the front of a civil building, which witnesses the original architecture of the buildings that gave onto the square before their raising and remodeling in the late XVII century and in the XVIII century.
The church hall has a central plan on an octagonal basis, with its eight, convex sides curved towards the inner space; the presbytery and high altar is set in another elliptic space which gives the central plan directionality. Behind the red marble columns of chapels in the perimeter are niches that house statues of saints, according to an articulated iconographical and devotional program. Over the pendentives runs a gallery on which oval windows open, inserted between the eight pillars from which originate the ribs of the vault. These meet to form an eight-point star, and on the regular octagon thus formed rises the lantern.
Regarding the liturgical arrangement, the high altar – designed by Guarino Guarini and built fifteen years after the inauguration of the church – is isolated in the presbytery, a fact that at that time of its construction represented a main innovation. The altar frontal in Carrara marble, a work by Carlo Antonio Tandardini, depicts the Voto di Emanuele Filiberto (Vow of Emanuele Filiberto).
St. Lawrence’s altar piece, above the altar, is by Marcantonio Franceschini. At the sides of the altar are the ducal galleries, directly connected with the palace.
The main altar on the right is dedicated to the founding saint of the congregation, St. Cajetan of Thiene; on the opposite side the group of marble pieces depicting the Virgin and angel Gabriel by Giuseppe Maria Carlone recall the mystery of the Annunciation.

In the first altar on the right, designed by Guarini, is a Crucifixion by the Jesuit brother Andrea Pozzo; on the marble frontal is a reproduction of the Holy Shroud of Turin, in memory of 15th September 1578, the day in which the Shroud was taken to the old church of St. Lawrence. The altar of the Concezione di Maria (Mary’s Conception) (the third on the right), preserves the painting of the Vergine Maria con beati sabaudi (Virgin Mary with Blessed of Savoy), made by the painter from Bologna Domenico Maria Muratori. In the altar of the Natività (Nativity) (the third on the left), designed by Antonio Bettini from Lugano, is an altar frontal in three panels depicting, at the centre, San Giuseppe tra Gesù Cristo e la Madonna (St. Joseph between Jesus Christ and the Madonna); the altarpiece, representing the Natività del Redentore (The Redeemer’s Nativity), is a work by Paolo Dufour.
The pulpit in Indian walnut wood is finely carved and sculptured by Stefano Maria Clemente; it had been made for the church of the Corpus Domini but, being too large, was placed in St. Lawrence, donated by the City of Turin in 1752. In 1799, the convent was stripped of its furnishings and documents. In 1802 the order of the Theatines was suppressed and the friars were forced to leave. The lack of maintenance weakened the building. After the Restoration of the pre-Napoleonic order, the restoration of the church began: in 1829, the dome and the chapels were decorated. In 1838, the Theatine Friars were substituted by the Collegiata della Santissima Trinità (College of the Most Holy Trinity). In 1846, Antonio Dupuy, on the site of the primitive chapel of Santa Maria del Presepe (St. Mary of the Crèche), remolded the Oratorio dell’Addolorata (Oratory of Our Lady of Sorrows), vestibule of the church’s hall. The altar, attributed to Bernardo Antonio Vittone, is preceded by the Scala Santa (Holy Stairs); on it is a wooden Pieta by Giovanni Tamone. On the walls can be seen scenes from the Passion, attributed to the Florentine Pietro Antonio Palloni. Since 1835, liturgy at the church has been carried out by a community of six secular priests, the Saint Lawrence canons, with which the Association of Volunteers and Friends of St. Lawrence collaborates on a regular basis. 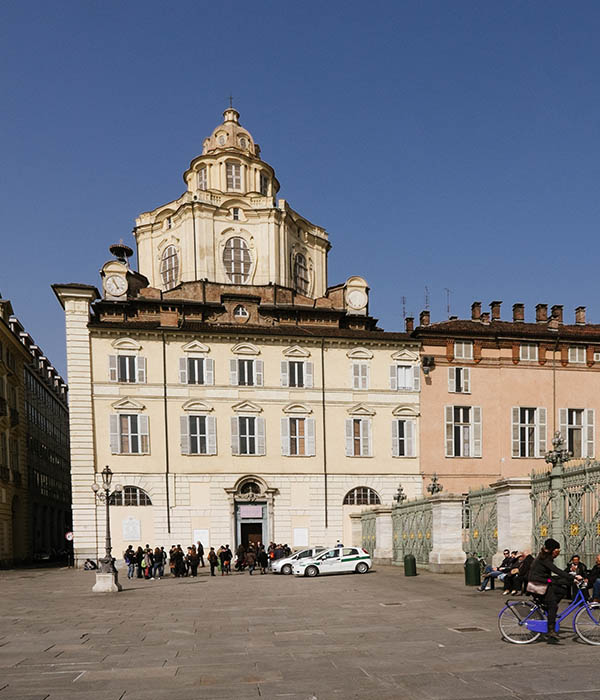 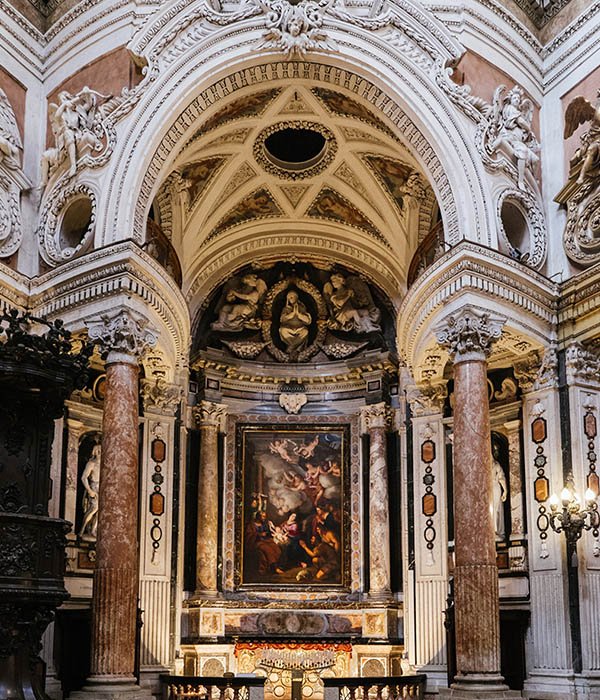 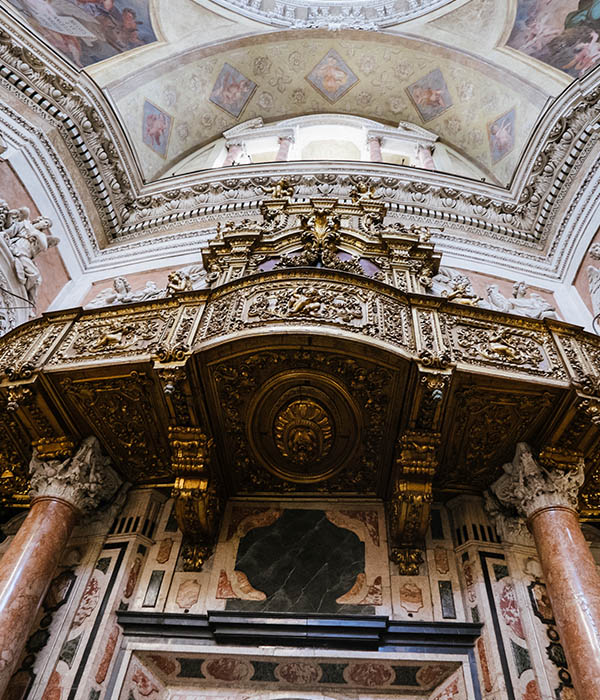 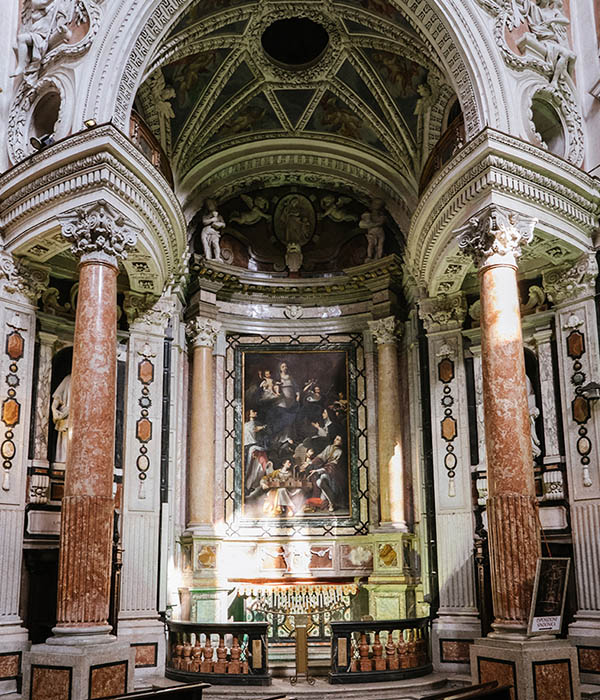 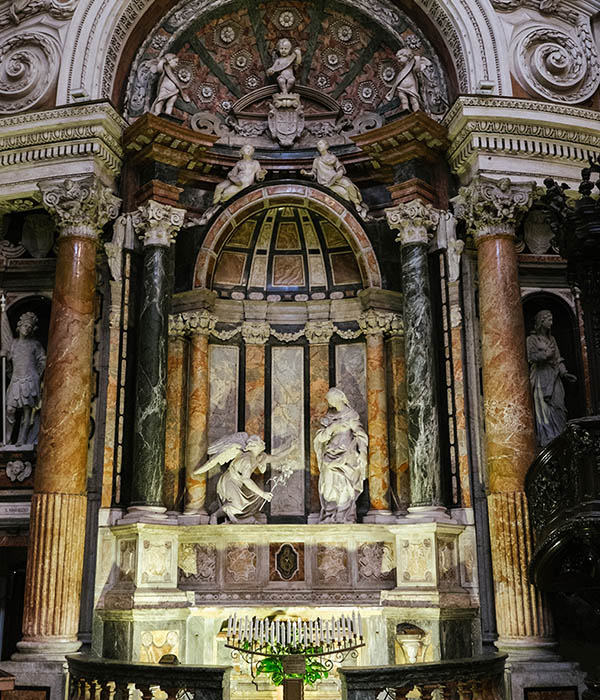 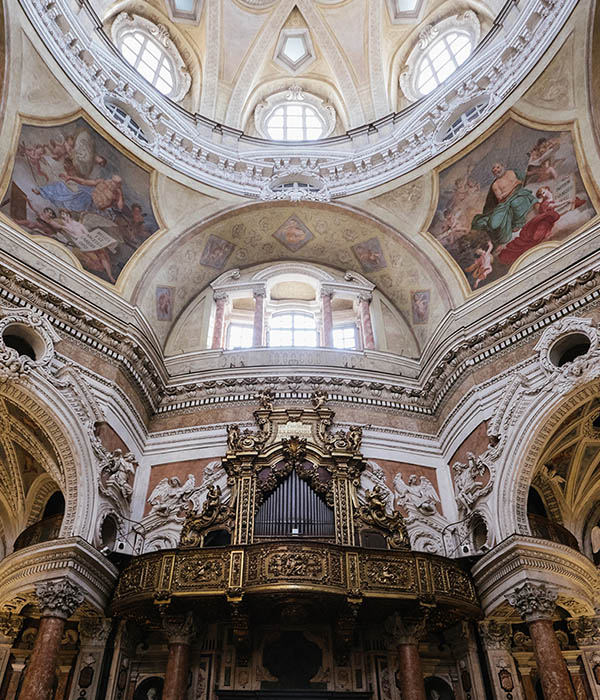 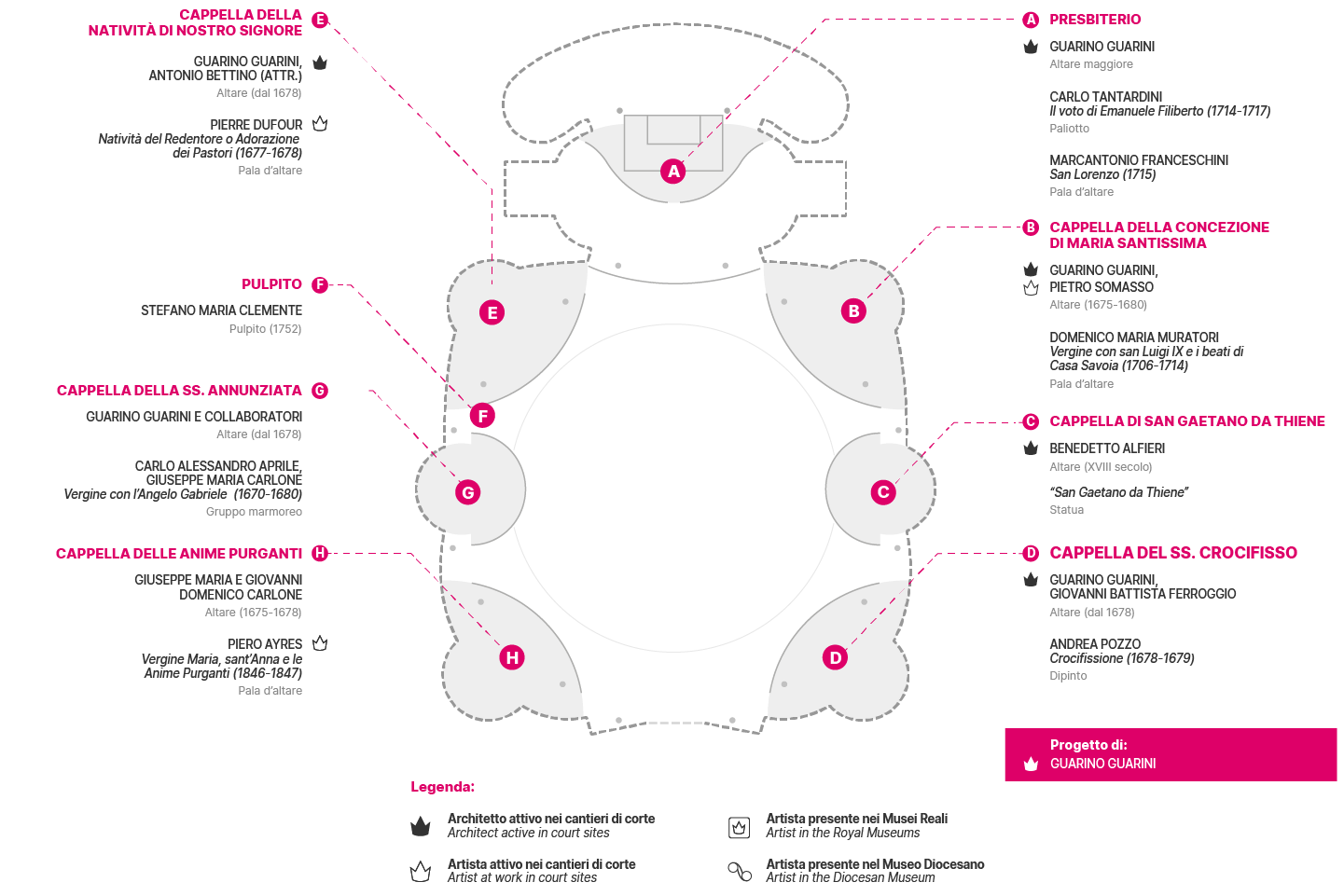