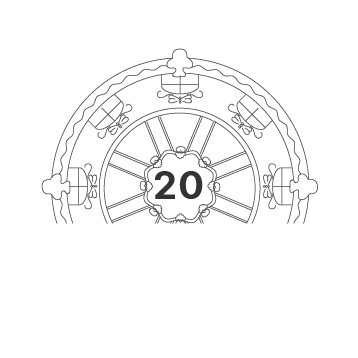 The religious congregations established after the Council of Trent were a decisive resource for the development of the XVII century city, regarding both charitable and spiritual assistance and to the construction of the extensions of the baroque capital city.

The church of San Giuseppe (St. Joseph) represents one of Turin’s most significant outcomes of such development. The regular clerics Ministri degli Infermi are an order dedicated to the healing of the ill and dying, founded in Rome in 1586 by Camillo de Lellis (1550-1614) and recognized by Pope Gregory XVI in 1591. The “Camillian” friars (from the name of their founder) were called to Turin in 1678 by the regent duchess and in 1681 settled in a religious house left empty by the Monache del Santissimo Crocifisso (Sisters of the Most Holy Crucifix). The premises are located along an important major axis of the baroque capital (the current streets Santa Teresa and Maria Vittoria), that connects the area of the military citadel with the new quarters towards the Po river, touching the royal square (the current San Carlo square); overlooking the same street are the monastery of the Carmelite friars (St. Theresa) and the house of the Oratoriani di San Filippo Neri (Oratorians of St. Philip Neri).

It is believed that, as of 1683, the Camillian friars started to expand the pre-existing chapel of the house, extending it inwardly into the city block; the plan is to be attributed to Carlo Emanuele Lanfranchi (1632-1721), architect and painter active in the main construction yards of Turin between the age of Guarino Guarini and the affirmation of Filippo Juvarra.
The present building basically preserves its late-XVII century structure, although remodeled by repeated interventions of iconographic updating and restoration.
The church is inserted into the adjoining buildings; its façade has a limited development but a deep extension into the city-block: the only nave of the hall opens into two wide lateral chapels and is finished by a monumental high altar; on the cross vault is a dome on a drum, that gathers from above the light needed for the natural lightning of the church.
The three altars that give on to the central space represent a significant repertory of the experiences in sacred architecture between the end of the XVII century and the beginning of the XVIII century.
The high altar was erected in 1696 upon commission by Giovanni Battista Trucchi di Levaldigi, the ducal minister of finances. The altarpiece, made by Sebastiano Taricco (1641-1710), recalls the main theme of the charitable mission of the Camillian friars, that is, the spiritual assistance to the dying persons for a pious death: the painting shows Il transito di San Giuseppe; in the moulding, God the Father. The altar structure closes the apse’s wall of the church; on the passages towards the religious house, at the sides of the altar, are the statues of the Redentore (the Redeemer) and Maria Maddalena (Mary Magdalene), attributed to Carlo Antonio Tantardini (about 1695).

The left altar is substantially contemporary to the high altar and was begun in 1694 upon commission by Giuseppe Ignazio Carlo Bianco: on a black marble background are free columns of yellow marble, that hold a complex gable, animated by cherubs; the original altarpiece by Taricco, portraying San Carlo, was substituted by a sculptured Calvary, with the Crucifix, the Virgin, and St. John.The right altar, on the other hand, assumes the brighter and more colored forms of Juvarra’s altars from the beginning of the XVIII century. Embraced by two inwardly flexed wings, the altarpiece is dedicated to Camillo de Lellis; the work completes the building’s iconographic program, with the glorification of its founder, beatified in 1742 and canonized in 1746. The altarpiece is ascribed to Michele Antonio Milocco (1690-1772); the tabernacle’s shutter shows Christ’s Resurrection, and in the space under the altar table is a statue of the founding saint. Other ovals on the walls of the nave, by Gaspare Semerari, illustrate the saint’s life.
The building’s entire decoration was resumed, restored and completed during the last years of the XIX century (Carlo Thermignon and Luigi Belli) and during the first decades of the XX century (Federico Siffredi, from Enrico Reffo’s school, 1913); also during this period, a renovation of the façade was started in a neo-baroque style (Giuseppe Ferrari d’Orsara, 1909). The building’s iconographic plan is completed by the main episodes of the life of the Virgin and St. Joseph (in the dome’s gores), while the pendentives show in high-relief Abraham, Jacob, Joseph, and David. 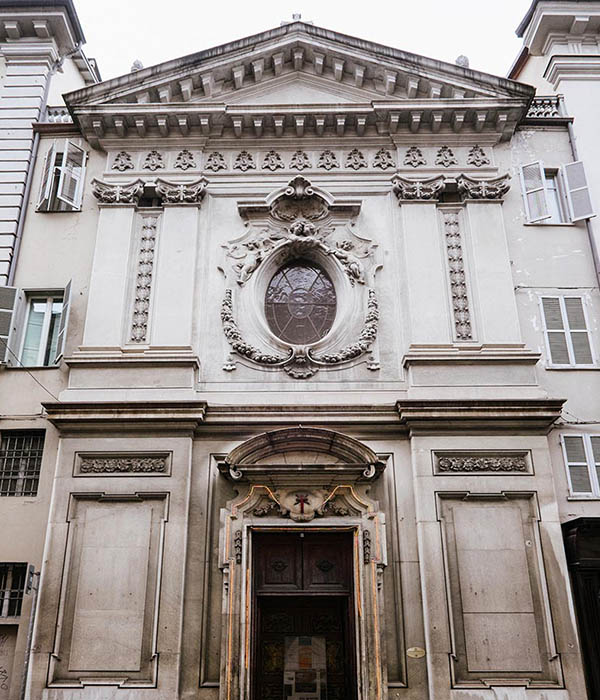 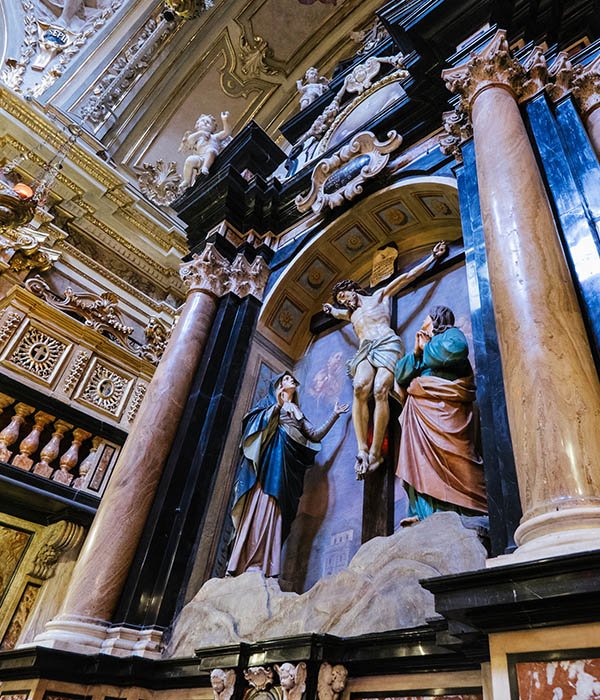 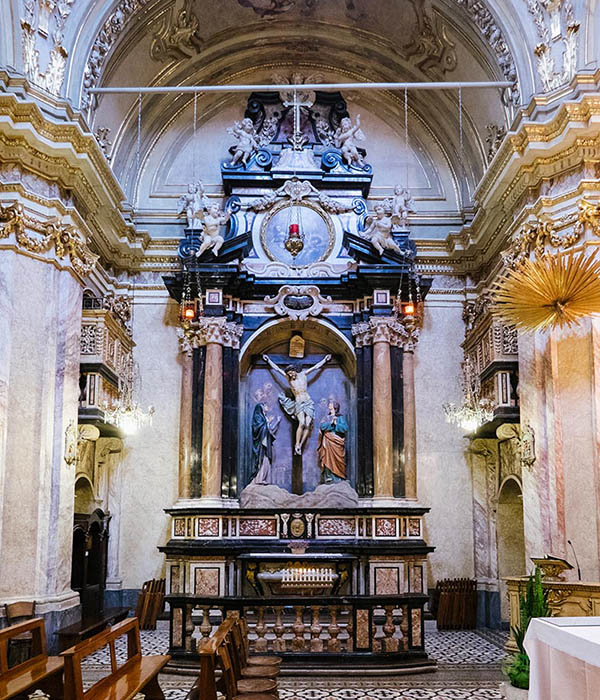 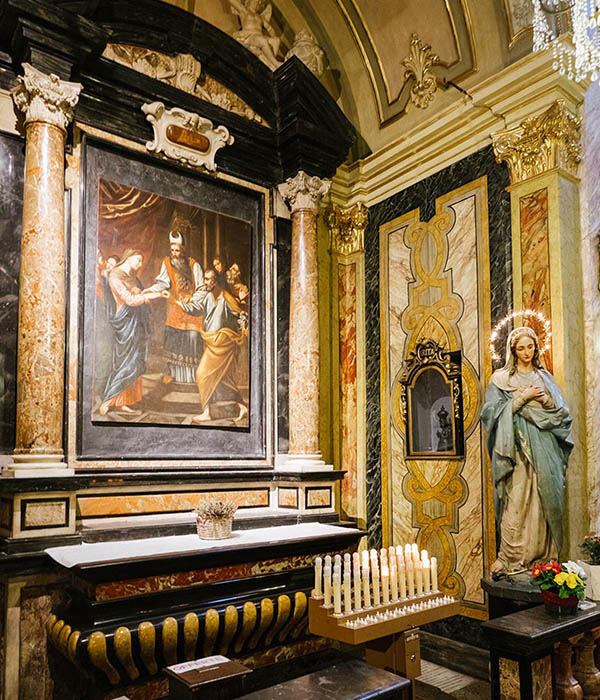 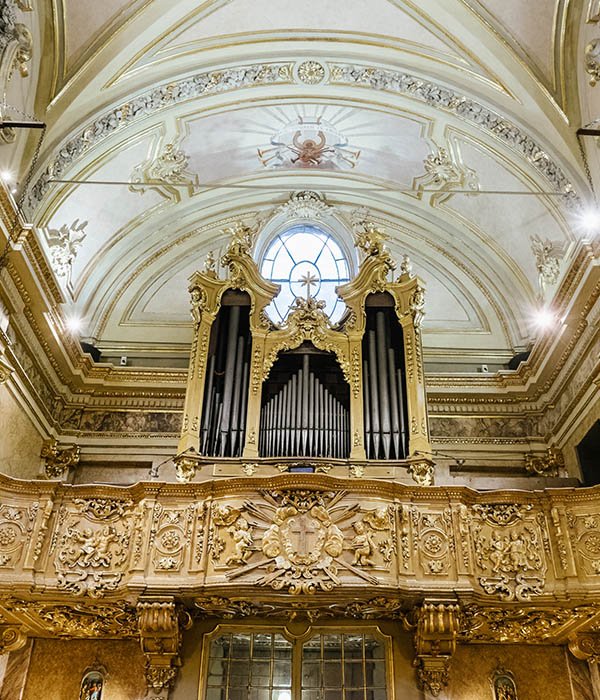