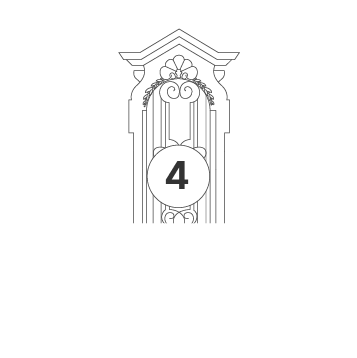 This church owes its birth to the settlement of the Franciscan community in the city from the XIII century and has always occupied a “strategic” position in the city, situated right in the centre of the medieval city near the vivacious Contrada di Dora Grossa (now via Garibaldi) and City Hall.

The convent of Minims started carrying out civic administrative activities from the moment of its establishment, and many chapels sponsored by rich guilds or aristocratic families can be found here.
The current appearance of the church hides the building’s medieval design, visible only in the fragments of masonry preserved in places untouched by subsequent reshaping and in the late-medieval fresco of the Virgin, preserved on the third pillar on the left. The church’s notoriety grew in 1580 when it became the temporary resting place – for seven years – of the Holy Shroud, transferred to Turin from Chambéry while awaiting a definitive and more solemn location in the city’s Duomo.

In 1608 Turin was re-launched as the capital city of the Duchy and the church was almost totally rebuilt, remaining with the Monastical brothers after divisions within the order. The structure has three vaulted naves, built partially by re-using the previous ones. From the mid-XVIII century onwards, the alterations made by the Piedmontese architect Bernardo Antonio Vittone (presbytery, dome, choir and certain altars) gave new character to the building: architectural and decorative solutions continuously varied to catch light from above or simulate brightness inside the building still reveal Vittone’s influence, recognizable in the large oval windows above the central nave’s arches, in the round skylights, in the right aisle’s barrel-vaulted chapels, in the big oval window of the choir and again in the angels and puttoes flying between the clouds, partly painted and partly stuccoed in the dome. The design of the façade of 1761 is attributed to a disciple of the architect Mario Ludovico Quarini. The façade is in the classical style, marked vertically by pilaster strips and fluted columns of a single order. The central portal has a segmental arch and a large oval window over it. A marked trabeation stops the ascending trend of the vertical elements and is weighed down by the pediment. The present aspect of the building is unlike the original: the medieval street was widened and made part of the modernization of the city’s old centre. A fire in 1942 seriously damaged the roof, the bell-tower and the vault with its decorations. Subsequent works transformed it into its present state.
At the head of the nave, vaulted and decorated by Giovanni Masoero we find the high concave altar in Roman style, made of polychrome marble and designed by Vittone, displaying under the “mensa” and behind a gilded gate the relics of St. Innocenzo transported from the Roman catacombs in 1765.

The aisles are densely lined with devotional chapels, the result of patronage from aristocratic families and guilds. ln the Chapel of the Crucifix with the polychrome marble altar by Vittone, we can see the wooden Crucifix of the Luganese Carlo Plura. The Chapel of St. Omobono, due to the initiative of Tailors (one of the first guilds to be established under Carlo Emanuele I that held their meetings in the church starting in the XVII century) was built by the Turinese architect Barberis during the second half of the XVIII century. The Chapel of St. Antonio da Padova, with a rectilinear altar designed by Vittone, is embellished by the elegant detail of two angels by Stefano Maria Clemente, a Turinese sculptor. The church’s masterpiece is the Chapel of St. Anna, erected under the patronage of the guild of Luganese stonecutters, sculptors and architects who were active in the main court and church construction yards.
The church’s fame, however, is mostly due to the activities of the best-known Turinese social saints. It was here that the “Convitto Ecclesiastico di San Francesco” was set up in 1808 by the theologist Luigi Guala for the education of clergymen. St. Giuseppe Cafasso was rector of the Convitto from 1833 to 1849, and here St. Giovanni Bosco perfected his pastoral training. Worth noting are the Cafasso confessional, the altar to the Angelo Custode (Guardian Angel) where don Bosco first celebrated mass in 1841, the sacristy where the same don Bosco met Bartolomeo Garelli, first boy in his oratory, the San Bartolomeo Chapel and the courtyard of the Oratory. 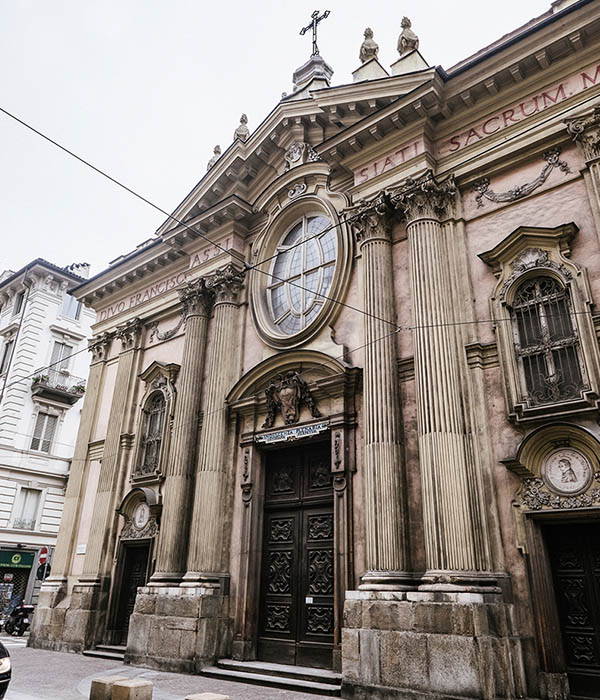 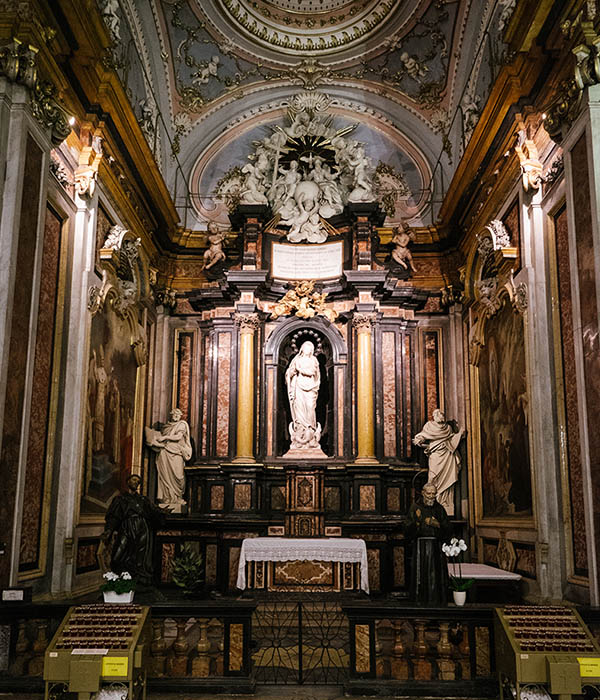 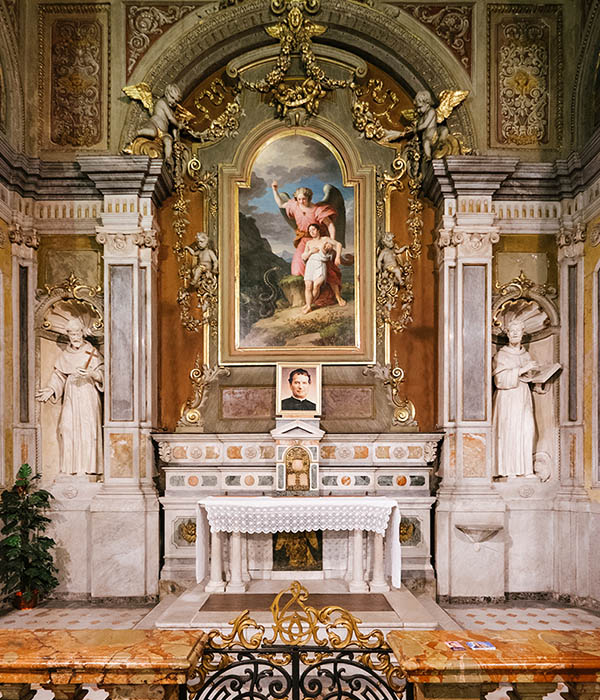 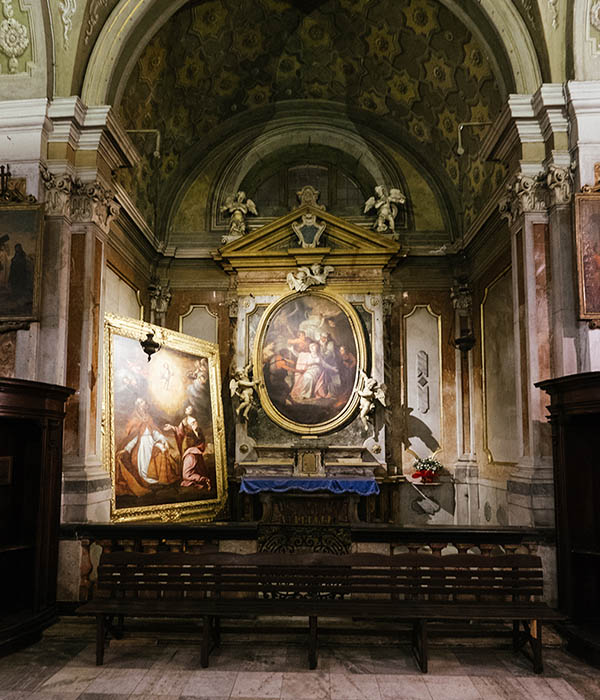 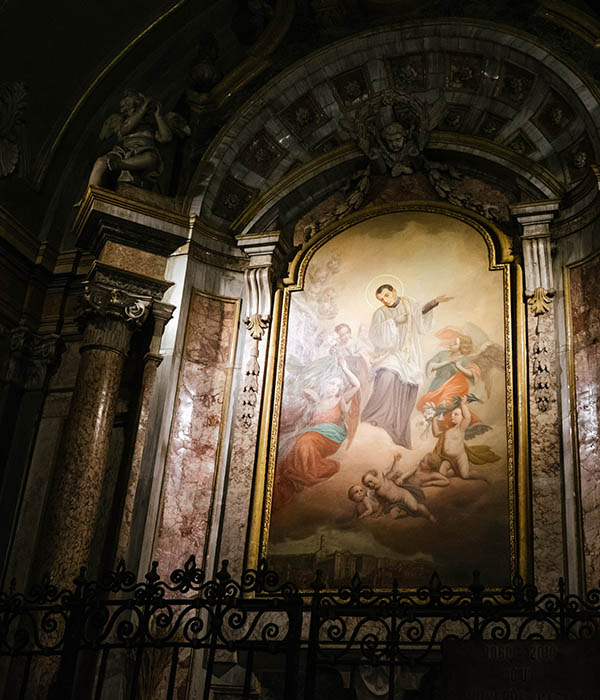 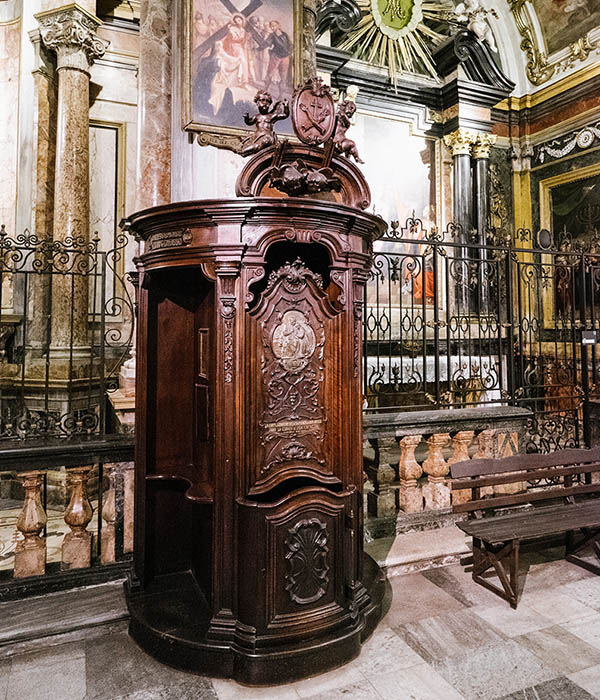