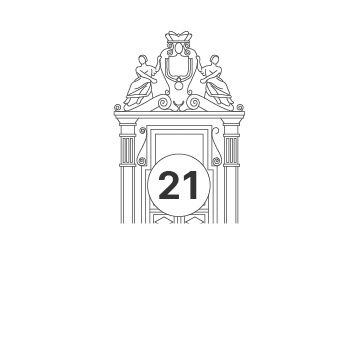 In addition to the religious orders introduced into Piedmont by Carlo Emanuele I of Savoy between the end of the XVI century and the beginning of the XVII, the Minims of San Francesco da Paola (St. Francis of Paola), famous for the strictness of their rule, were summoned in 1623. In 1632, Vittorio Amedeo I granted this order for the construction of the monastery and the church a large lot of land along the “strada della calce” (“road of lime”), so called because it was traveled over by those who went to the river to get sand.

After 1641 the project was attended to by the Carmelite friar and architect Andrea Costaguta. The church of San Francesco da Paola is thus preexistent compared to the eastern extension of the city towards the Po river and together with the bridge on the river very strongly conditioned the planning of the new axis.
Following the implementation of the plan made by Castellamonte (begun in 1673), the church and the adjoining convent were embodied into the regular volume of the current city block comprised between Via Po, Via Accademia Albertina, Via Principe Amedeo, and Via San Francesco da Paola. The prospect on Via Po of this complex was not hidden by the arcades and constitutes to this day the only interruption in their regular development. San Francesco da Paola is one of the “royal” churches of Torino, built to express the Savoy sovereign’s feelings of devotion.

In this case, the promoters and supporters of the building were Vittorio Amedeo I, and his wife Christine, sister of King Louis XIII of France, as indicated by the coat of arms on the façade, decorated with the Savoy cross and the fleur-de-lis of the French Royal family. The decision to finance the construction was taken after a vow they made in the hope of having a heir to the throne.
The façade, from a simple drawing, was made by masters from Lugano, among whom Martino Solaro and Giacomo Papa, and was finished in 1667. Inside, six lateral chapels give onto the only nave, decorated with rich polychrome marbles and covered with a barrel vault with lunettes; the chapels’ altars were patronage of the families with ties at the Court. The church was consecrated on 30th November 1730.
The high altar, decorated with the coat of arms of Christine of France, was made between 1664 and 1665 by Tomaso Carlone, design by Amedeo di Castellamonte; the altarpiece, portraying at the bottom the children of Vittorio Amedeo I and Christine, Francesco Giacinto e Carlo Emanuele al cospetto di san Francesco da Paola portato in gloria (Francesco Giacinto and Carlo Emanuele in the Presence of St. Francis of Paola in Glory), is by Charles-Claude Dauphin (1665). Also by Dauphin is the lateral painting Luisa di Savoia chiede la grazia per intercessione di San Francesco da Paola (Luisa of Savoy Asks for Grace by Intercession of St. Francis of Paola). The subjects of these two paintings are perfectly aligned with the special taste for religious images combined with Court portraits that was widespread in Turin during the second half of the XVII century.
Also attributed to Dauphin’s studio is the other lateral painting: San Francesco da Paola che attraversa lo stretto di Messina (St. Francis of Paola Crossing the Strait of Messina).
The first chapel on the right is called “of the Trinity”; it contains the funeral monument of the marquises Morozzo della Rocca (1699) and the painting Il transito di San Giuseppe by the painter Tommaso Lorenzone (mid-XIX century). In the second chapel on the right, the funeral monument of Tommaso and Marcantonio Graneri is complemented by the painting San Michele Arcangelo (St. Michael Archangel) by Stefano Maria Legnani (end of XVIII century).
The third chapel on the right was patronage of the Carron di S. Tommaso, afterwards inherited by the marquis Lascaris, whose daughter married the marquis Gustavo di Cavour; the latter had the coats of arms of the Carron family removed and substituted with those of the Benso family.

The chapel was made by Giuseppe Maria and Giovanni Domenico Carlone according to the indications given by Amedeo di Castellamonte; on the altar: Immacolata con i Santi Francesco da Paola, Francesco d’Assisi e Francesco di Sales (The Immaculate with Saints Francis of Paola, Francis of Assisi, and Francis of Sales) by Giovanni Peruzzini; to the sides, two canvasses of Genoese culture.
The first chapel on the left, wanted by the wife of Vittorio Amedeo II of Savoy Duchess Anna Maria d’Orléans to fulfill her vow for the birth of the heir to the throne, is decorated with the altar of Santa Genoveffa (St. Genevieve), attributed to Carlo Emanuele Lanfranchi, and with the altarpiece by Daniele Seiter, portraying the saint (end of XVII century); on the sides are works by François Josermé.

In the second chapel on the left, called “della Crocifissione” (“of the Crucifixion”), is the painting Gesù crocifisso con la Vergine e san Giovanni (Jesus Crucified with the Virgin and St. John), Genoese school, datable back to the XVII century.
The third chapel on the left, called “della Vergine” (“of the Virgin”), was commissioned by Cardinal Maurizio of Savoy around 1654. The statue of the Madonna del Buon Soccorso (Madonna of the Good Succor) by Tomaso Carlone, signed and dated 1655.
Between 1857 and 1858, Francesco Gautier completed the vault with frescoes that depict stories of St. Francis of Paola.    Paintings by Bartolomeo Guidobono are preserved in the choir and the sacristy.
The convent of the Minims was suppressed during the Napoleonic era and since 1801 the church of San Francesco da Paola has been at the service of its own community parish. 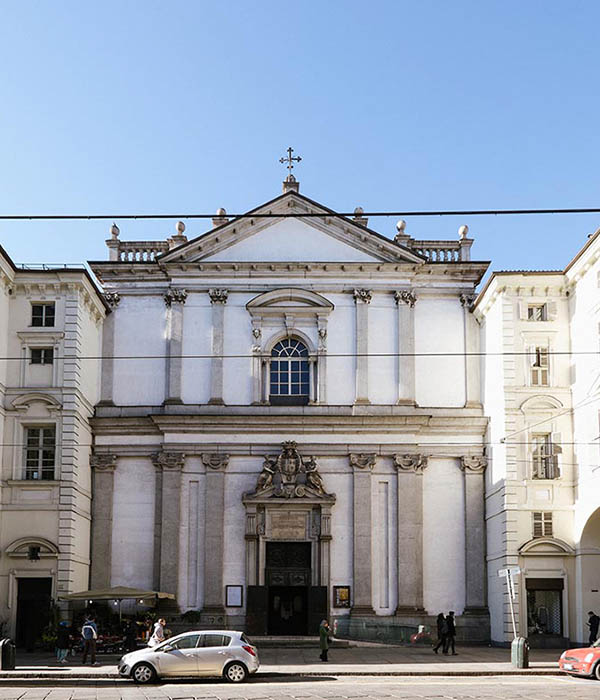 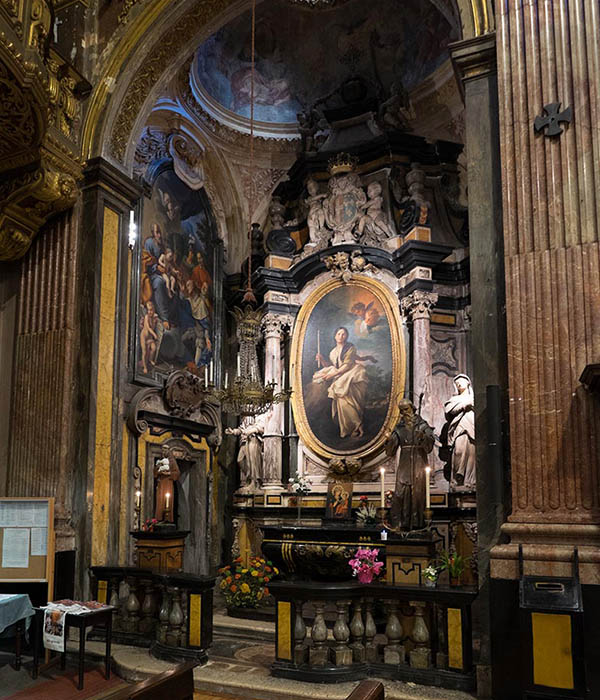 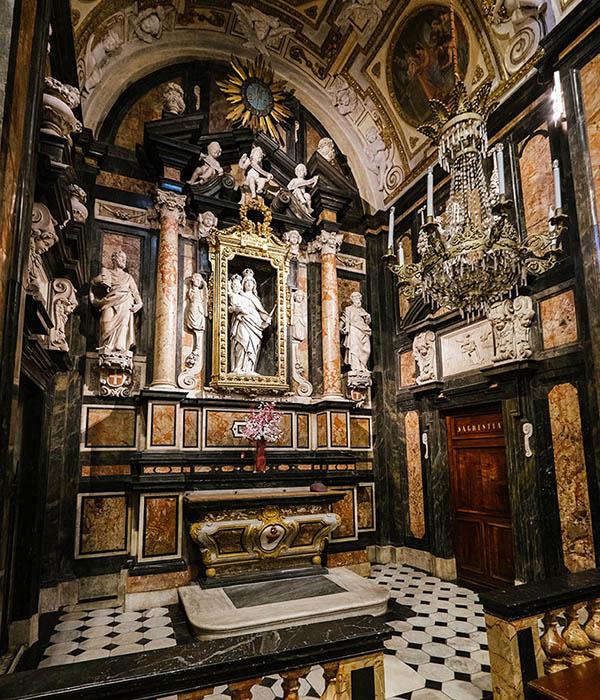 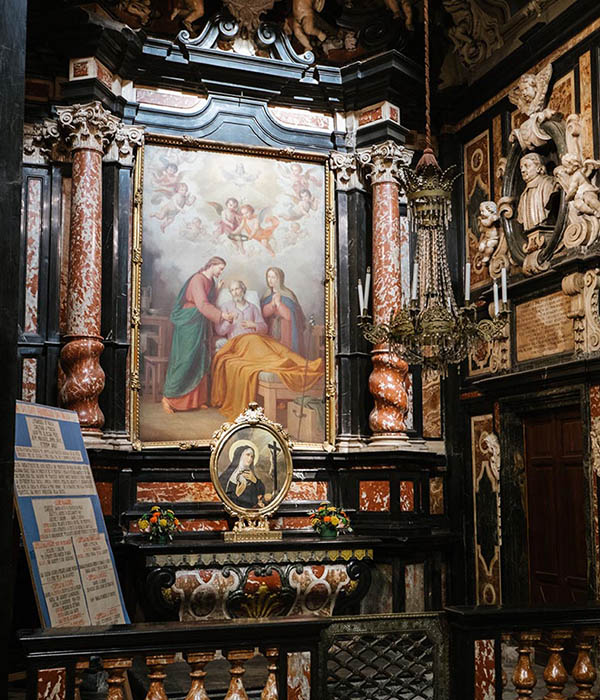 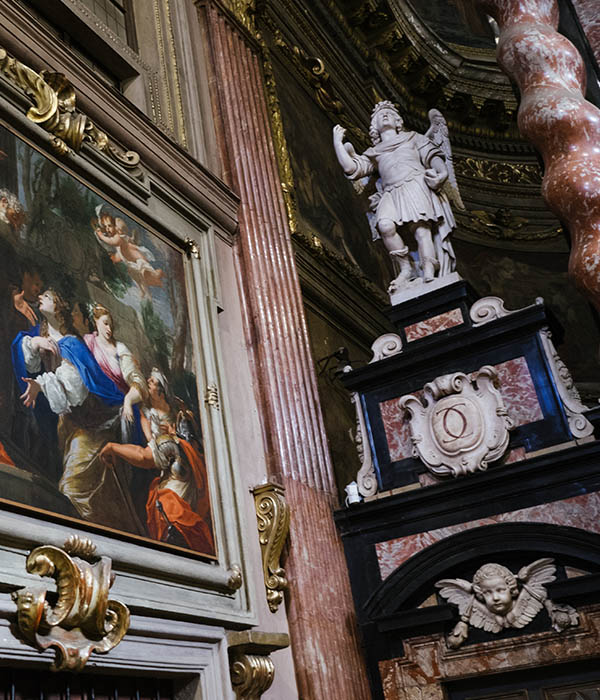