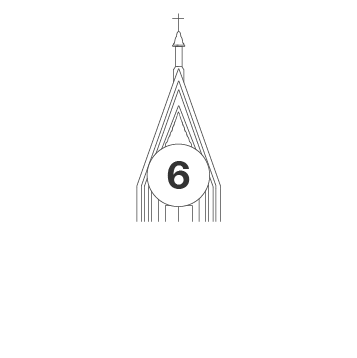 The Order of Friars Preachers, founded by St. Dominic of Guzman and approved in 1216 by Pope Honorius III, established a community in Turin no earlier than the 1260s. The premises of the church and of the Dominican monastery was the block that lay between the central Piazza delle Erbe, main market area in Turin, and the northern gate of the city.

Soon the Dominican community actively entered public and religious life in the city, particularly in its culture. The first small church (with an oriented structure, that is, with an east-west direction) was already substituted at the beginning of the XIV century by a new building, parallel to the street connecting the market and the city gate. This new church was in turn extended and completed toward the middle of the century; the bell tower dates back to the mid-XV century. The urban interventions of the XVIII century, planned by Filippo Juvarra, deeply involve the church: following a decree that provided for the dirizzamento di Contrada di Porta Palazzo (straightening of the district of Porta Palazzo – 1729), the two eastern aisles were demolished and later the whole building was reshaped with baroque forms.

The current medieval aspect is due to a radical intervention of stylistic restoration made between 1906 and 1911 under the supervision of Riccardo Brayda and Alfredo d’Andrade: having eliminated most XVIII century decorations, a building with gothic structure was again proposed by condensing the stylistic characters of various other Piedmontese churches from the XIV century.
Walking down the left aisle, the second altar is dedicated to the Dominican saints Thomas Aquinas, Catherine of Siena and Peter Martyr (painting by Enrico Reffo, 1910); at its side are the relics of two blessed Dominicans active in Piedmont between the XIV and XV centuries: the inquisitor Pietro Cambiasi di Ruffia and Aimone Tapparelli, confessor of the Blessed Amedeo IX of Savoy, duke from 1464 to 1472, portrayed in the late XV century fresco of the third altar; just after the altar dedicated to San Vincenzo Ferreri, preacher in the Waldensian valleys (1777 altar by Giovan Battista Feroggio, who also planned the high altar, painting by Rocco Comaneddi), a fragmentary fresco portraying the Dominican Sant’ Antonio Pierozzi is preserved, attributed to the last years of Martino Spanzotti’s activity (beginning XVI century).
The most interesting artistic and devotional aspect is represented by the Cappella delle Grazie (the Chapel of the Graces) at the end of the left aisle, frescoed toward the middle of the XIV century by the artist known as Maestro di San Domenico (the Master of San Domenico), the only XIV century cycle of paintings preserved in Turin (although largely restored and integrated at the beginning of the XX century by Giovanni Vacchetta).
It depicts the Dominican ideal of apostolic community: in the lower register, I dodici apostoli (the twelve apostles); in the lunettes (from the right), San Tommaso presenta alla Vergine tre devoti (St. Thomas Introduces Three Devout Men to the Virgin), the Annunciazione (Annunciation), and the Majestas Domini; at the centre of the chapel, a worshipped XVI century icon, Vergine col Bambino e i santi Giovanni Battista e Gabriele (Virgin with Child and SS John the Baptist and Gabriel).

The devotion for Mary – a trait of Dominican spirituality – is reintroduced in the Cappella del Rosario (Chapel of the Rosary) (at the end of the right aisle), made during the second half of the XVIII century according to the project of Luigi Michele Barberis: on the altar, the altarpiece by Guercino (1591-1666), depicting the Madonna del Rosario e i Santi Domenico e Caterina da Siena (Madonna of the Rosary and Saints Dominic and Catherine of Siena), is surrounded by the Quindici misteri del Rosario (Fifteen Mysteries of the Rosary) carved by Stefano Maria Clemente (mid XVIII century), also the artist behind the pulpit in the nave.
At the end of the left aisle is the entrance to the cloister, from which it is possible to access the sacristy (Madonna del Rosario – Madonna of the Rosary by Antonio Milocco) and to the Sala Cateriniana, the winter chapel, where a banner is normally kep; in its centre the Sindone sorretta dalla Vergine e da due angeli (The Holy Shroud of Turin Held up by the Virgin and Two Angels) is depicted. Next to the chapel, a plaque reminds the Dominican Friar from Alba, Giuseppe Girotti, a Biblical scholar who lived for many years in the monastery of Turin and died on Easter day 1945 in the death camp of Dachau, where he had been deported for having helped numerous Jews during the racial persecutions; in 1995 he was conferred the Israeli honour “Righteous Among the Nations”. Above the original door to the cloister, a mid-XIV century frescoed lunette depicting a Madonna con Bambino, angeli e devota (Madonna with Child, Angels, and a Devout Woman). Also worth remembering is that in the Cappella delle Grazie the Blessed Pier Giorgio Frassati made his profession as Dominican tertiary in 1923.
The church is still run by a community of Dominican friars. For many years now it has held prayers in the style of the Taizé Community on the first Friday of every month. 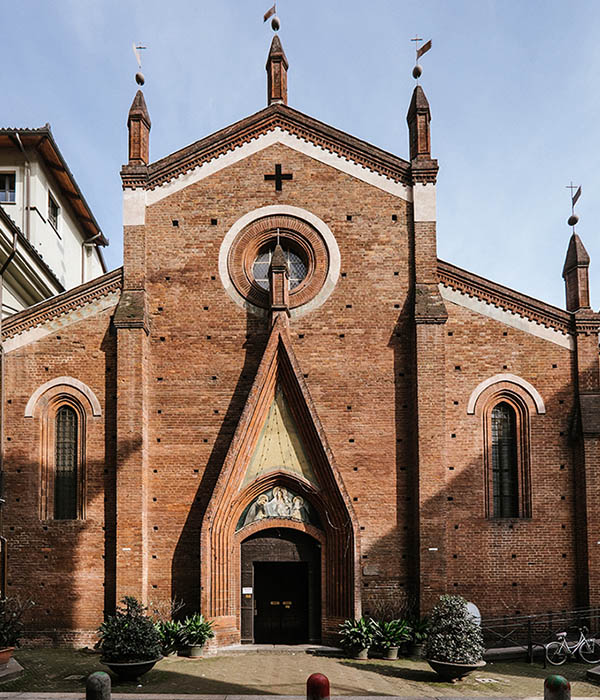 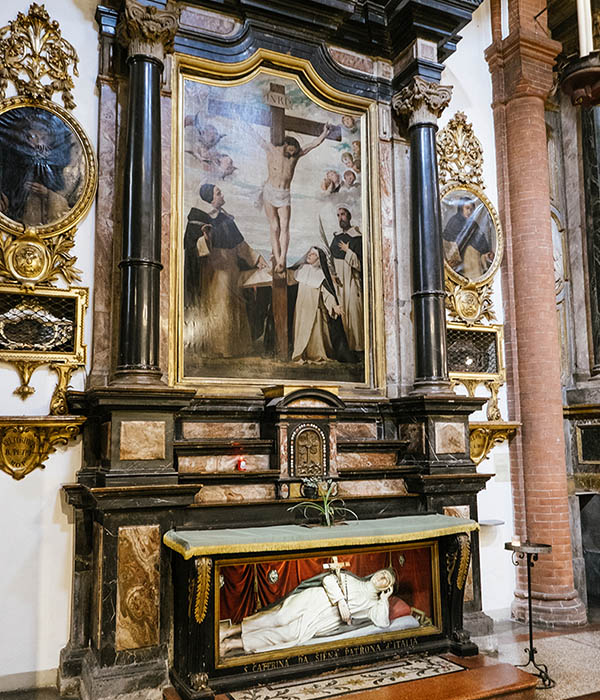 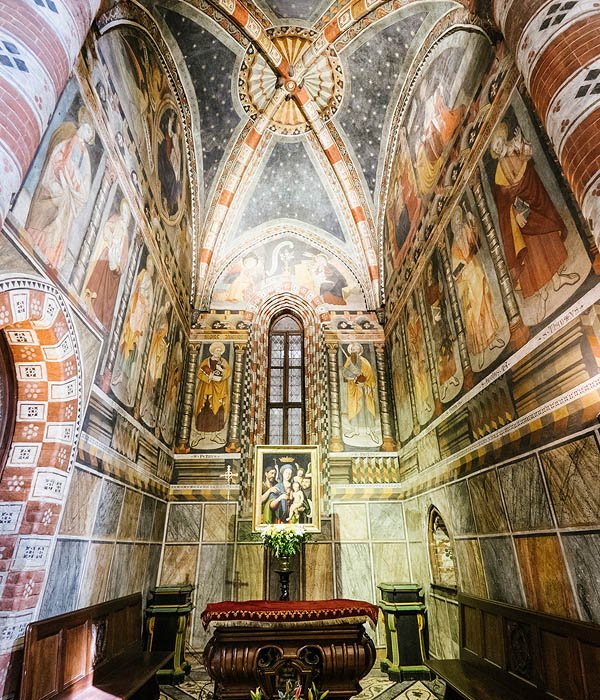 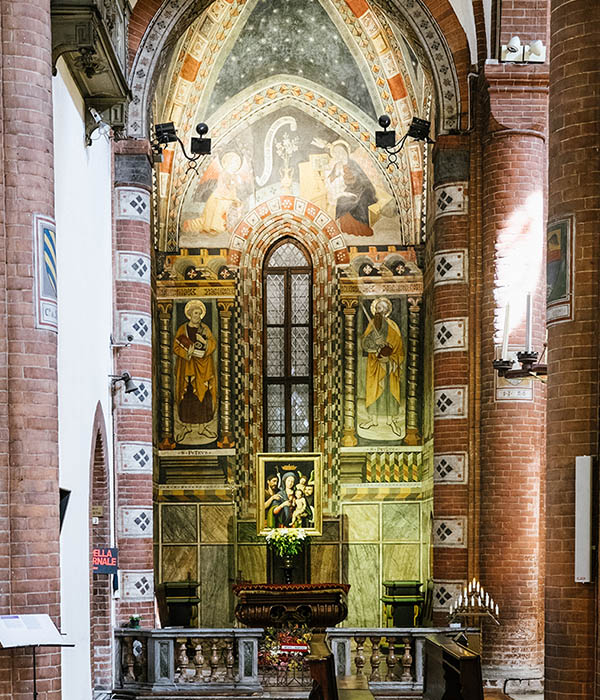 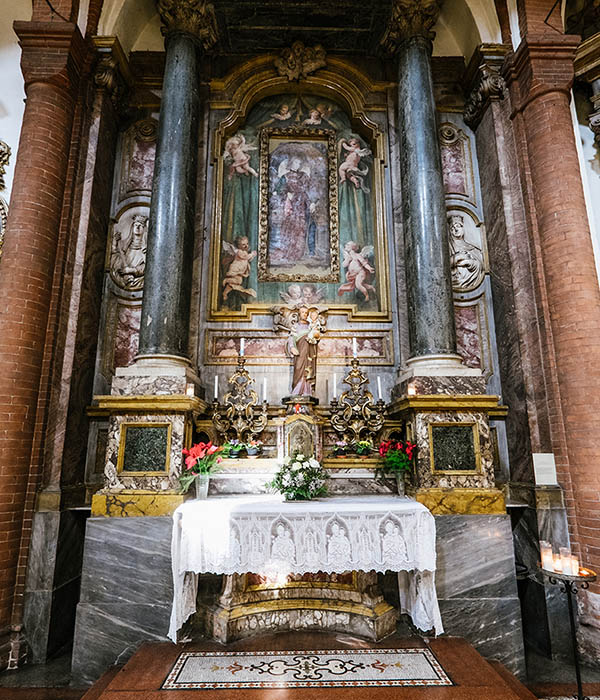 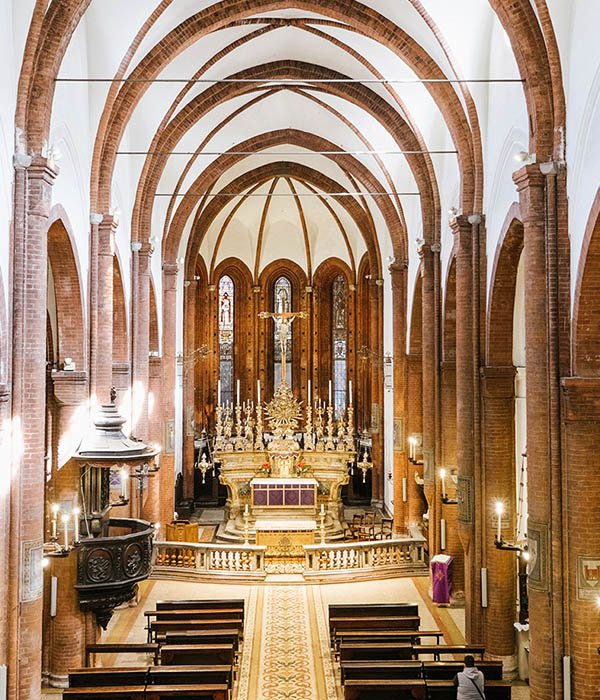