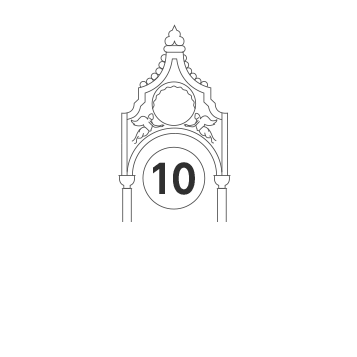 The church of San Dalmazzo is situated in the historical and geographical heart of the city. Since the XI century there was knowledge of a pre-existing religious building on a basilical plan dedicated to the martyr, San Dalmazzo (St. Dalmatius), located right on the Via Dora Grossa, the present-day Via Garibaldi, in the vicinity of Porta Susina

Via Dora Grossa is the ancient decuman of the Roman castrum, that is the street that crosses it from east to west. Its importance was asserted throughout the medieval period because it was the preferred connection of the western city gate to the castle (the present-day Palazzo Madama).
Since 1271 the pre-existing church of San Dalmazzo was attributed to the Hospital Friars of St. Anthony, who helped travelers, pilgrims and assisted the sick. In 1559, with the return of the Savoy Family to Turin and the expansion of the city, the dukes called new religious orders to the capital and granted them land on which to build new churches. Thus in 1580 the Confraternita della Misericordia was accommodated by the Hospital Friars in the church of San Dalmazzo.

In 1606 the Barnabite order came to Turin at the behest of the duke Carlo Emanuele I, who hosted them in San Dalmazzo. The Barnabite order, founded in Milan in 1530 by Sant’Antonio Maria Zaccaria, was accommodated in the city triumphantly with the particular favour of the duke but the cohabitation between this order and the Confraternita della Misericordia proved to be so difficult that the latter was moved to the present-day Chiesa della Misericordia (see relative card)
The presence of the Barnabites affected the appearance of the church as it is today. They built the façade in 1702, expanded the interior, built the Cappella della Madonna di Loreto (the Chapel of Our Lady of Loreto) between 1629 and 1631 in imitation of the house of the Virgin in Loreto.
At the end of the XIX century the parson Filippo Montuoro decided to radically renovate the church and commissioned the painter Enrico Reffo to decorate the interior according to the neo-medieval style and the architect Porta to build the Cappella di San Paolo (Chapel of St. Paul).
The church is on a basilical plan, with two aisles and a nave. On the sides of the lateral aisles there are eight niches with altars. The upper part of the nave has encaustic figures created by Reffo representing widows, penitents, virgins, martyrs, but also Barnabites, monks, fathers of the church lined up as in a long procession. Noteworthy is the precious pulpit made of Carrara marble with the effigy of Filippo Montuoro in memory of his splendid renovation of the building.

The altar is overtopped by a marble baldachin held up by four columns. In the right-hand aisle is the Cappella di San Paolo, strictly associated with the Barnabite presence in the church. ln fact the Barnabites were especially devoted to St. Paul the Apostle – so much so that the real name of the order is Chierici Regolari di San Paolo (the regular Clergymen of St. Paul). The term Barnabite derives from the presence of these monks at the church of San Paolo e Barnaba (St. Paul and Barnabas) in Milan.
In the chapel above the altar of carved marble is a window depicting San Paolo, San Carlo Borromeo (the first to show faith in the work of Sant’Antonio Maria Zaccaria), and San Francesco di Sales, showing the charisma with which the order identities itself in particular.
The fourth chapel to the left is named after St. Leonardo Murialdo, vital help to young workers in a Turin whose industrial development skyrocketed in the second half of the XIX century. Murialdo, headmaster of the Collegio degli Artigianelli since 1866 till his death in 1900, was tirelessly committed to improving the conditions of workers, especially the younger ones. Leonard Murialdo, baptised in the church of San Dalmazzo, officiated his first mass here. 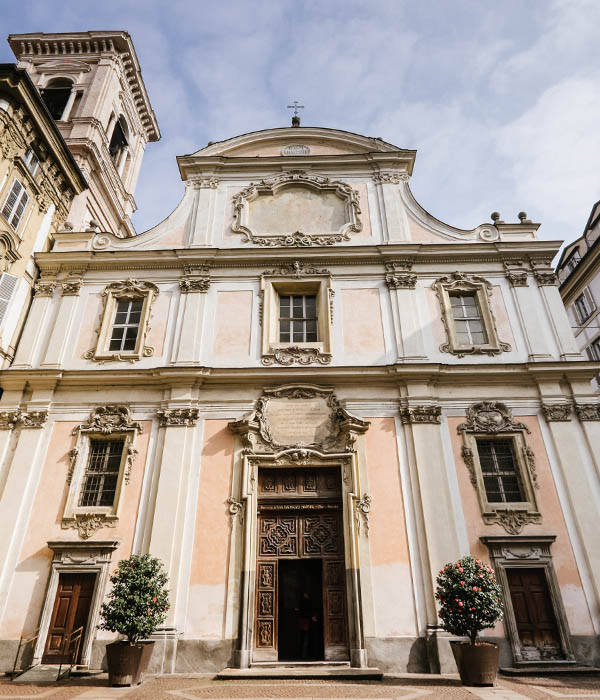 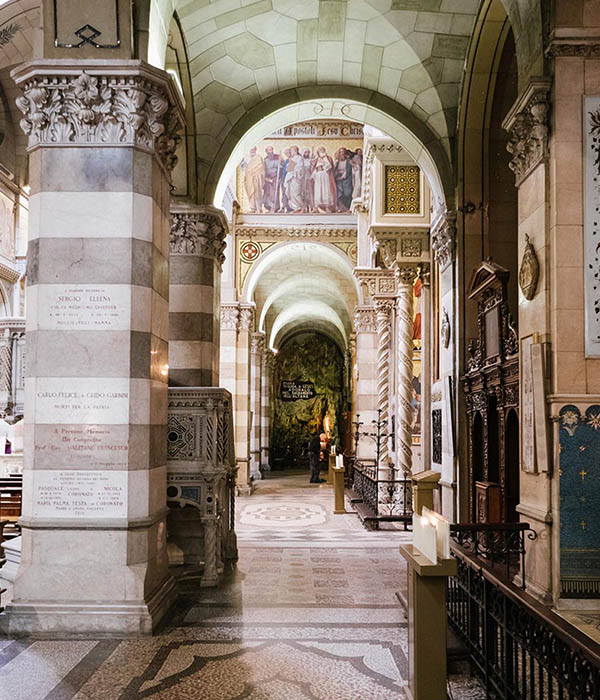 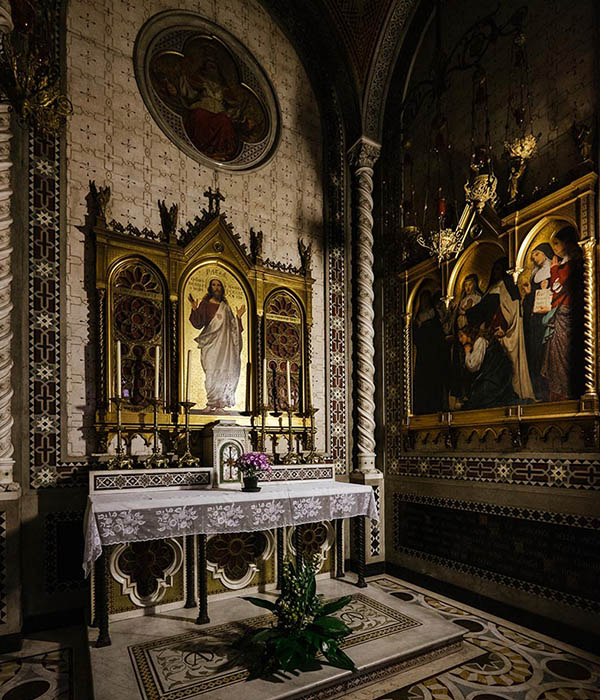 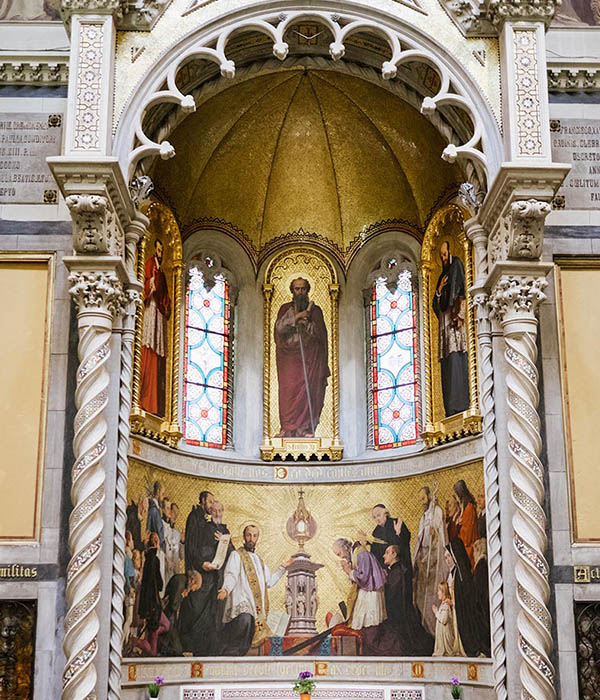 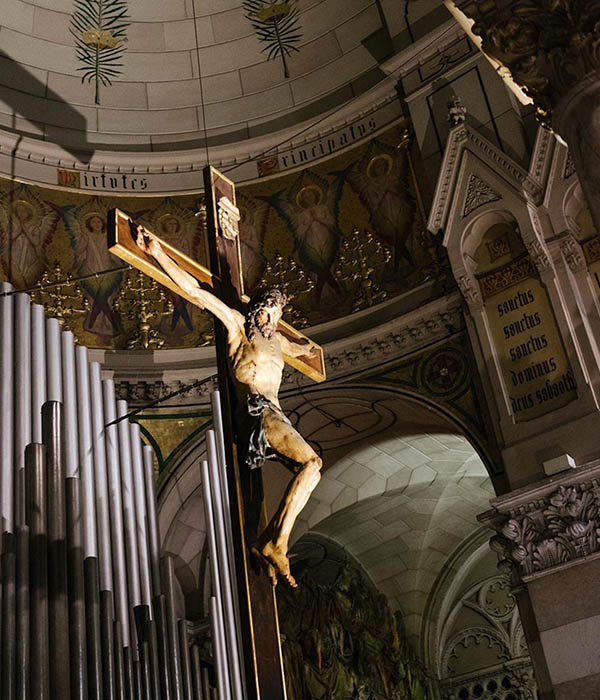 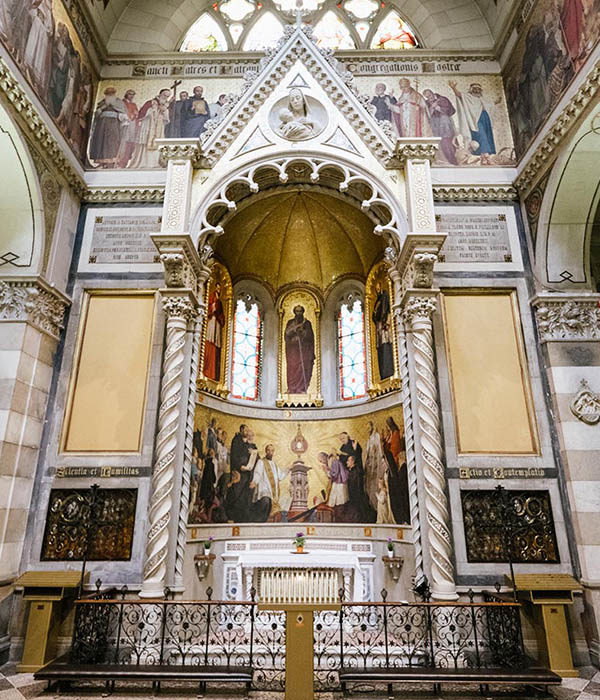