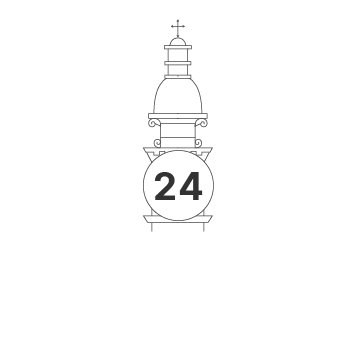 With the growth of southern Turin, the Contrada Nuova was opened and Piazza Reale (now Piazza San Carlo) was mapped out (1637) as a courtly area linking the old nucleus to the new urban expansion. In conformance with the French model for royal squares, this square was constructed with uniform buildings with arcades and enclosed by twin churches on the southern front destined for religious orders under ducal protection.

The churches of San Carlo and Santa Cristina, before the interventions of the ‘30s, framed the entrance of the southern tract of the Contrada Nova Castellamontiana, now Via Roma, like scenographic wings integrated into the architecture of the buildings.
The site of the church of San Carlo was granted by Carlo Emanuele I of Savoy to the barefoot Augustinian Friars. The first stone was laid on 1st September 1619 and construction proceeded so briskly that by the next year, although only partially built, it was officiated. The church was dedicated to Charles Borromeo, canonized on 21st August 1610, at the behest of Duke Carlo Emanuele I, who was particularly attached to the bishop from the time of his first pilgrimage to Turin to worship the Holy Shroud. In those years, the new church rose up isolated on a plateau, separated from the old city by the ruins of the ramparts and the clay ditches.

As Duke Carlo Emanuele I wished for the construction to be completed quickly, considerable sums from his inheritance, pecuniary penalties and donations were set aside for this purpose. In 1639, columns from the demolished ducal stables were used to erect the cloister.
Although the church was opened for worship shortly after its foundation, many decades passed before the internal decoration was completed. The inside is a single nave with two bays, four lateral Chapels and a rectangular presbytery with a barrel vault. In 1653, the regent Cristina of France entrusted Bernardino Quadri with the execution of the high altar and the stucco decoration of the altar itself and the choir, based on a drawing by Amedeo di Castellamonte.
A painting by Giacomo and Giovanni Andrea Casella of San Carlo in adorazione della Sindone (St. Charles in adoration of the Holy Shroud) was placed in the center. Two statues by a Luganese sculptor representing Faith and Charity are in the niches in the back wall, and on the sides, two paintings by Giovanni Paolo Recchi San Carlo che visita a Vercelli Carlo Emanuele moribondo (St. Charles visiting the dying Charles Emanuel I in Vercelli) and San Carlo accolto dai duchi di Savoia (St. Charles being welcomed by the Dukes of Savoy).
The lateral chapels were also built. In the second on the left, designed by Amedeo di Castellamonte, the statue of the Madonna della Pace (Our Lady of Peace) by Tommaso Carlone can be admired. In the first, also the work of Tommaso Carlone, is the Mausoleum of Francesco Maria Broglia, a lieutenant general of the French troops who commissioned the chapel.
In the first chapel on the right, the marble altar frontal by Carlone depicting La preghiera nell’orto (The Prayer in the Garden) and in the second, built from a design by Amedeo Castellamonte for the Augustinian friars, is the San Pellegrino Laziosi davanti al Crocifisso (St. Pellegrino Laziosi before the Crucifix), painted by Rodolfo Morgari.

The XIX century paintings depicting Serviti e la Vergine (The Servites and the Virgin), San Teobaldo che intercede presso la Vergine (St. Theobold interceding with the Virgin) by Vittorio Amedeo Rapous and San Giuseppe con il Bambino che colpisce con un dardo Sant’Agostino (St. Joseph with the Infant shooting St. Augustine with an arrow) by Charles-Claude Dauphin are in the sacristy where the altar is located.
In 1834, through intercession by the King and the Municipality, a competition was proclaimed for fixing up the façade (which had remained rustic up to this point). It was won by the architect., Ferdinando Caronesi, who followed and simplified the Juvarrian lines of Santa Cristina. The facade was therefore erected in two orders and the entry portal was decorated with a bas-relief portraying Emanuele Filiberto comunicato dal cardinale Carlo Borromeo (Emanuele Filiberto receiving communion from Cardinal Charles Borromeo). The statues of San Francesco di Sales and of the Blessed Bonifacio of Savoy are on the attic, before ovals in neoclassical rectangular frames. In 1837, Carlo Alberto ceded the convent to the Servants of Mary. They were subsequently replaced by the laity, who embellished and enlarged the church based on a design by Carlo Ceppi. The high altar was moved back and the sacristy was transformed into the lateral choir. Rodolfo Morgari was commissioned to paint the vault and the upper walls with Byzantine ornamentations. The temple was thus re-consacrated on 14th June 1866. When the second section of Via Roma was rebuilt in 1935, the apse and part of the right side were covered in marble. 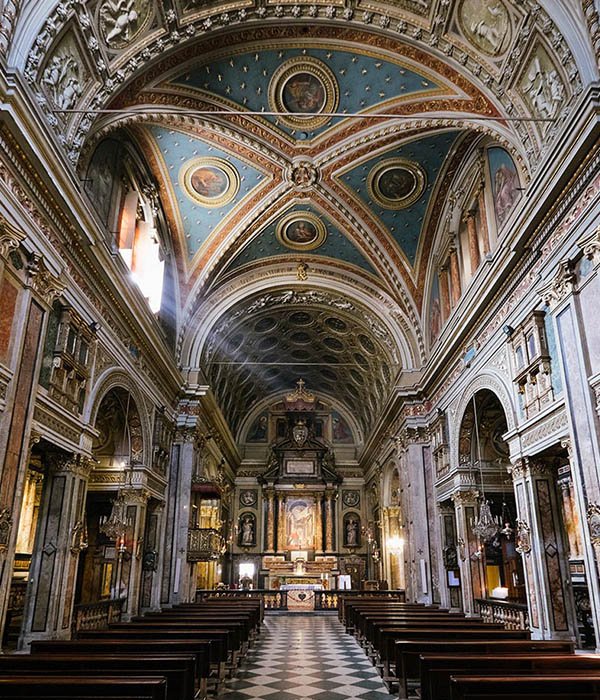 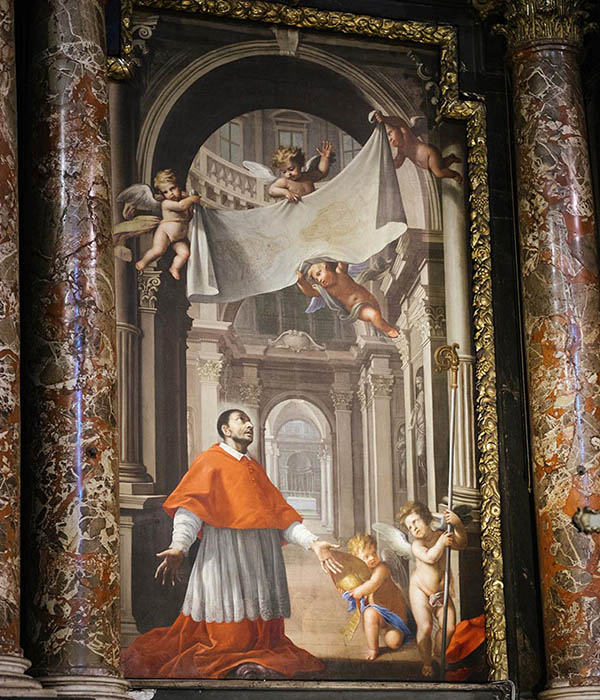 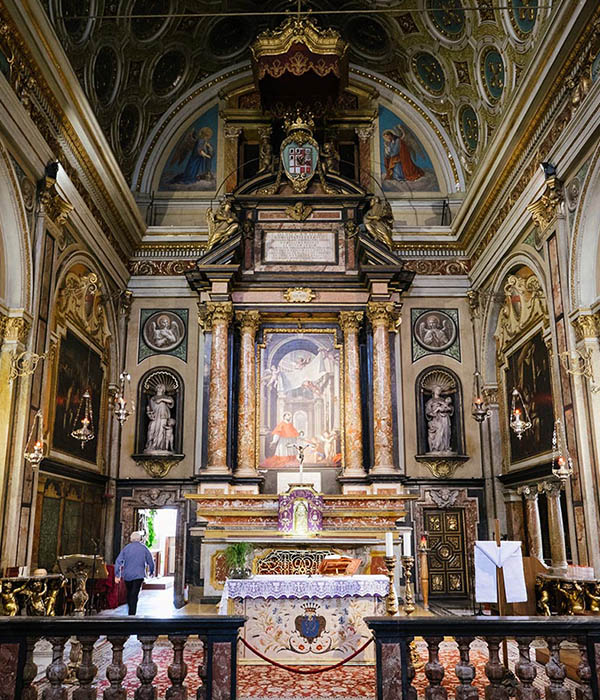 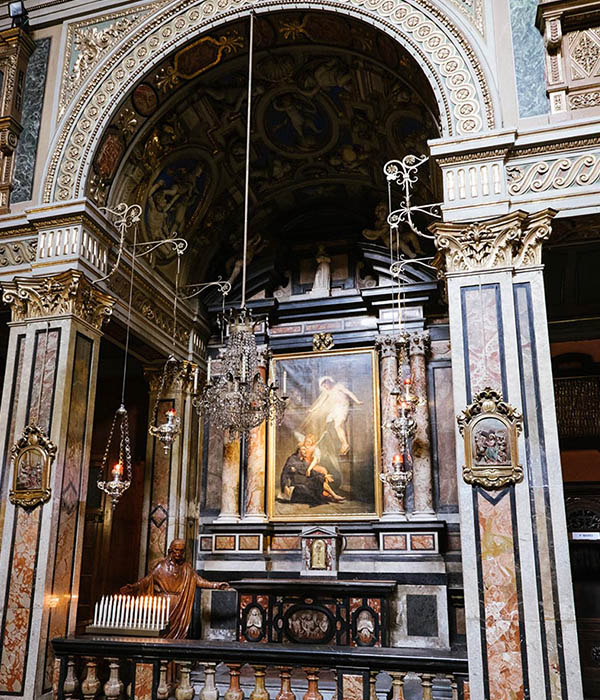 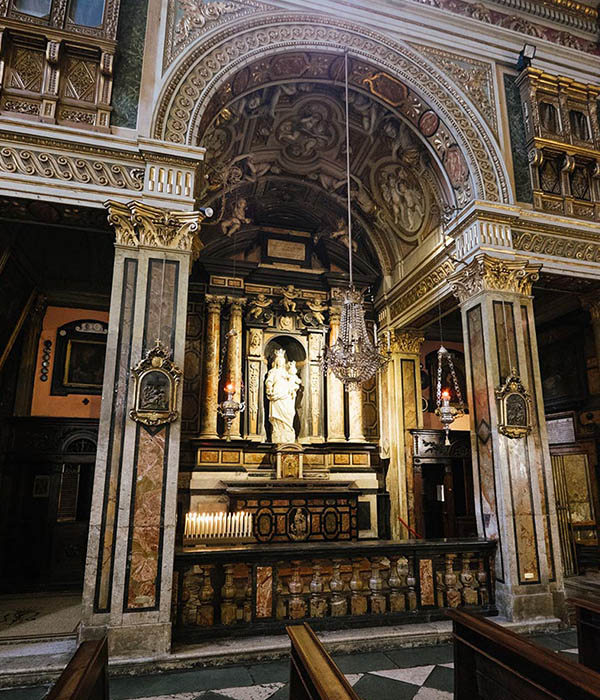 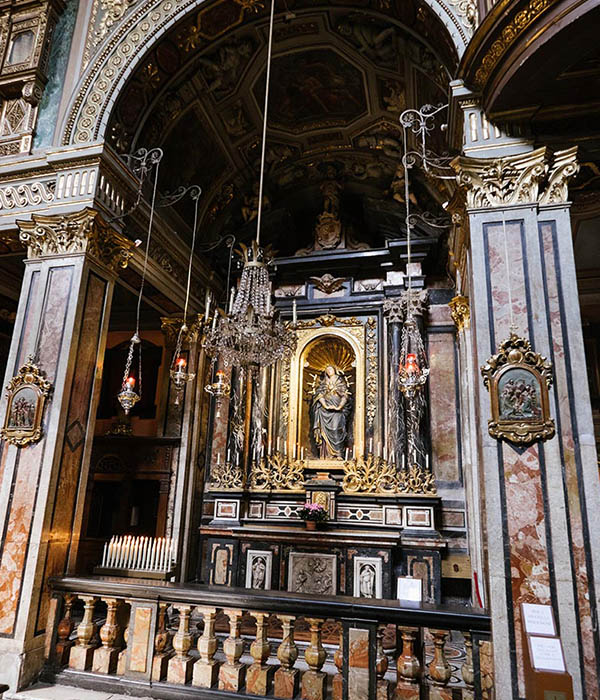