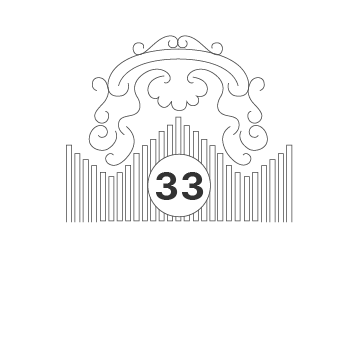 The so-called Cappella dei Mercanti owes its construction to the Pia Congregazione dei Banchieri, Negozianti e Mercanti di Torino (Pious Congregation of Bankers, Shopkeepers and Merchants of Turin). It is located on the ground floor of the former Jesuit college next to the church of the Santi Martiri, officiated by the same priests as of the XVI century.

Recognised in 1663 partly thanks to intervention from the Compagnia di Gesù, the Pious Congregation brings together bankers and merchants offering both assistance and charity since 1634, under the title of the Madonna Santissima della Fede (Holy Mary of Faith).
Standing in the so-called San Paolo block, between the present via Garibaldi, via Botero, via Barbaroux and via Stampatori, XVI century property of the Compagnia di San Paolo, the oratory was built in the years in which the rector was the Jesuit father Agostino Provana (1680-1726), a member of the important Provana family in Collegno, a charismatic man with excellent organizational skills. The first chapel, described by sources as «pokey compared to the number of merchants […] very humid and dark […] and in some ways unsafe because of the old walls», is enlarged and raised to the height of two floors, incorporating a hall and some rooms inhabited by the fathers on the higher floor.

Inaugurated in 1692, the large rectangular hall was decorated in the following years thanks to the effort and interest shown by the very same Father Provana who specifically summoned the painter Stefano Maria Legnani known as ‘Il Legnanino’ from Milan. His artwork is responsible for the large fresco of the vault representing Il Paradiso, profeti, sibille ed episodi biblici (Paradise, prophets, sibyls and biblical episodes); in the monochrome ovals we see stories about the Genesis, Abramo, Isacco e Giacobbe (Abraham, Isaac and Jacob). The illusionistic architectural paintings in which the scenes painted by Legnanino are by Giovanni Battista and Girolamo Grandi, from Lombardy, experts in the painting of smooth columns painted to look as fake marble, arches, corbels and volutes, coloured in shades of grey. The large cornice at the bottom of the ceiling was «gilded» at the start of the XVIII century by Carlo Antonio Negro.
In the XVIII century, the years of the «straightening» of via Dora Grossa (subsequently via Garibaldi), the chapel underwent other work which altered the entrance, facing the large hallway designed by Bernardo Antonio Vittone and Filippo Castelli that we still cross today. Other work was carried out on the structure in the XIX and XX centuries when it was declared a monument of national interest for its considerable artistic value (1910), and was the subject of important restoration.
Inside, the two side walls occupied by stalls of the wooden choir are rhytmically paced above by alternating statues attributed to the carver Carlo Giuseppe Plura, and large paintings in inlaid frames. The wooden statues in marbled wood which decorated the chapel between 1707 and 1715, portray the Doctos of the church: to the left, St. Agostino, St. Leone and St. Gerolamo to the right, St. Ambrogio, St. Gregorio and St. Giovanni Crisostomo. Plura is also responsible for the wooden bust of the Virgin Mary to the left of the altar.

The high altar, first entrusted to Filippo Juvarra’s firm (the plan fell through), was built on design of architect Michele Emanuel Buscaglione following an agreement in 1797. Placed in the area of the presbytery, it is decorated by a grand variety of polychrome marbles in Neo-Classical style, supported by six truncated cone-shaped columns and the tabernacle is qualified by the small shutter in richly decorated copper with bas-relief miniatures. Two exquisite gilded reliquaries can be found on the sides.

On the wall behind the altar there are three other paintings by the Jesuit painter Andrea Pozzo, part of the series sent from Rome specifically for the Turinese Congregation. The central altarpiece adorned with subtle chromatism depicts the Adorazione dei Magi (The Adoration of the Magi) (prior to 1694), the one on the right shows Fuga in Egitto (Escape to Egypt) and the third, on the left, Natività con i pastori (Nativity with the Shepherds – 1701).From 1694 to the middle of the XVIII century, the iconographic programme of the chapel was developed by large paintings illustrating the adoration of the Magi, gifts and the manifestation of Christ to the world’s powerful and wise. Thus the glorification of the Epiphany, the day in which the Congregation celebrates its annual holy day, is the subject chosen to trace a long narrative developed on the right by Comparsa della stella consultata dai Magi (Appearance of the star consulted by the Magi – 1703) by Andrea Pozzo and his atelier, by Re David che medita il mistero dell’Epifania (King David meditates on the mystery of the Epiphany) by Legnanino, by the Strage degli Innocenti (Slaughter of the Innocents – 1703) by the same Andrea Pozzo and his atelier, and also by Corteo dei Magi vicino a Gerusalemme (Procession of the Magi near Jeruaslem – 1712) by Niccolò Carlone. The story continues on the left with Annuncio dell’angelo ai Magi (The Angel’s Announcement to the Magi – before 1694) by Sebastiano Taricco, Aprimento dei tesori dei Santi Re (Opening the Holy Kings’ treasures) by Legnanino (the Magi offering gifts, 1705), Viaggio dei Magi verso Betlemme (Journey of the Magi towards Bethlehem – before 1694) by court portrait painter Luigi Vannier and finally Erode con i Magi e i sapienti (Herod with the Magi and the wise, dispute of the Magi, prior to 1694) again by Taricco.The top of the back wall is taken up by the chancel, placed there in 1698 and replaced between 1771 and 1772 with a case and organ by brothers Giovanni Battista and Francesco Maria Concone.The sacristy preserves the Adorazione dei Magi (Adoration of the Magi) by Guglielmo Caccia, known as ‘il Moncalvo’, the altarpiece on the altar of the first chapel of the Congregation, a small throne attributed to Giuseppe Maria Bonzanigo but by Michele Brassiè (1792), a cupboard by Natale Favriano (1712) and an ingenious mechanical calendar made in 1835 on a project by Giovanni Amedeo Plana, director of the Astronomical Observatory of Turin. 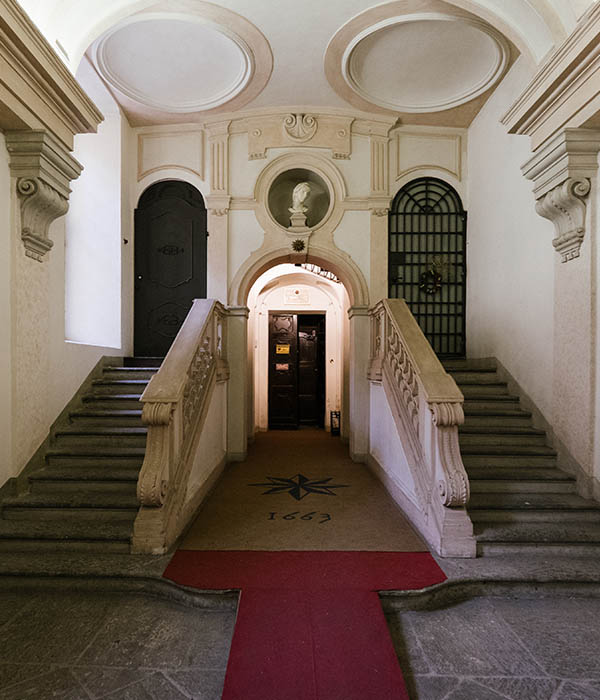 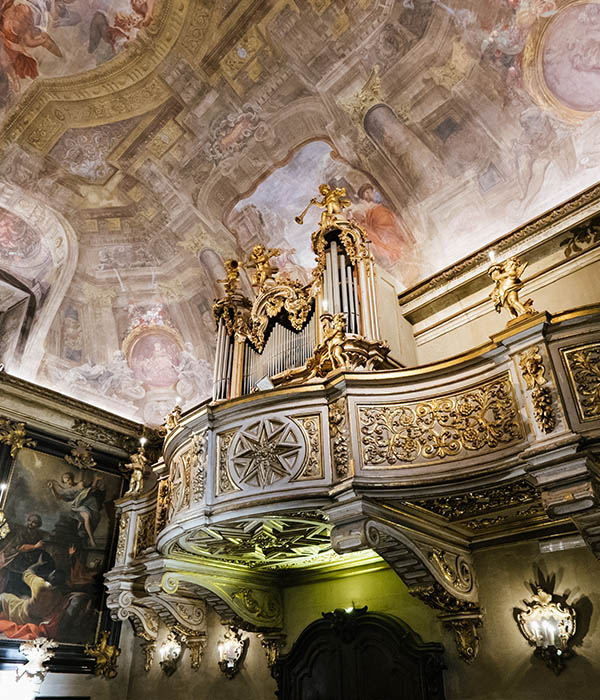 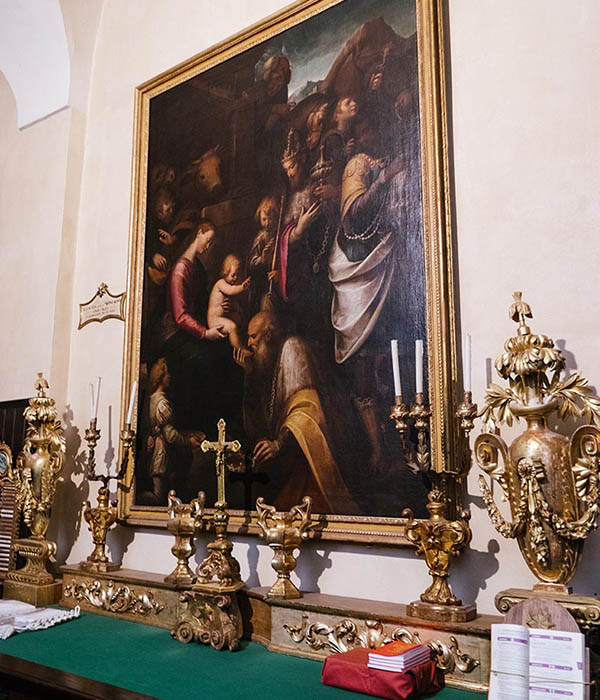 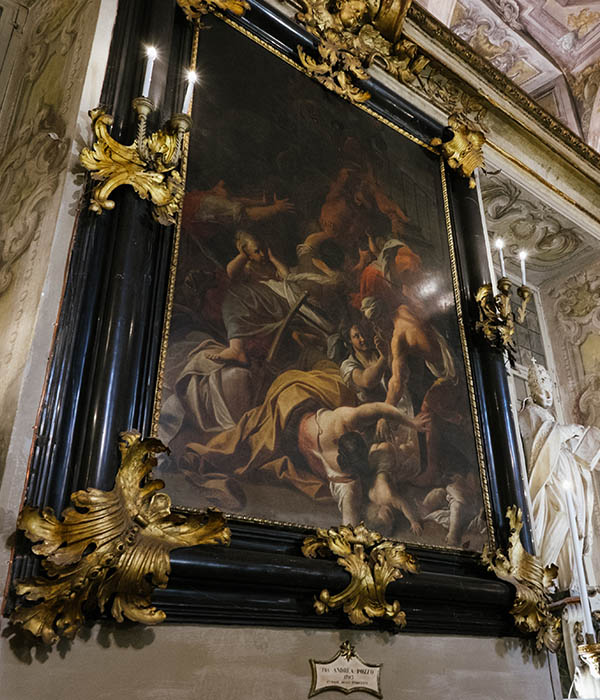 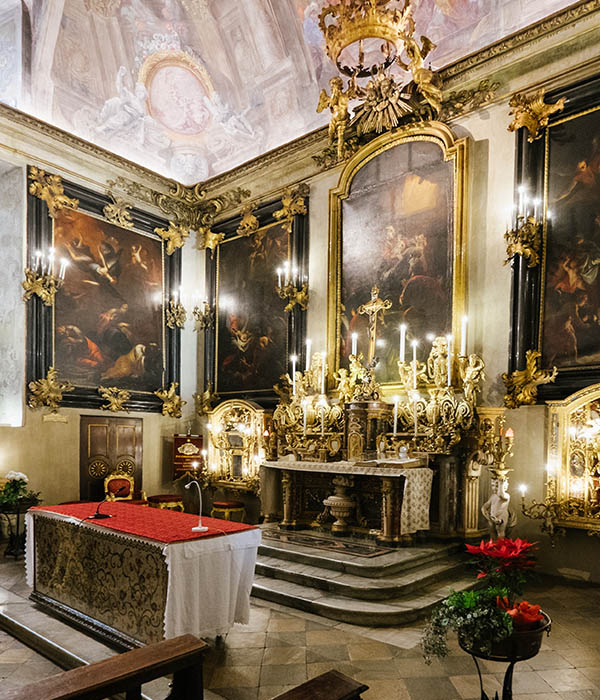 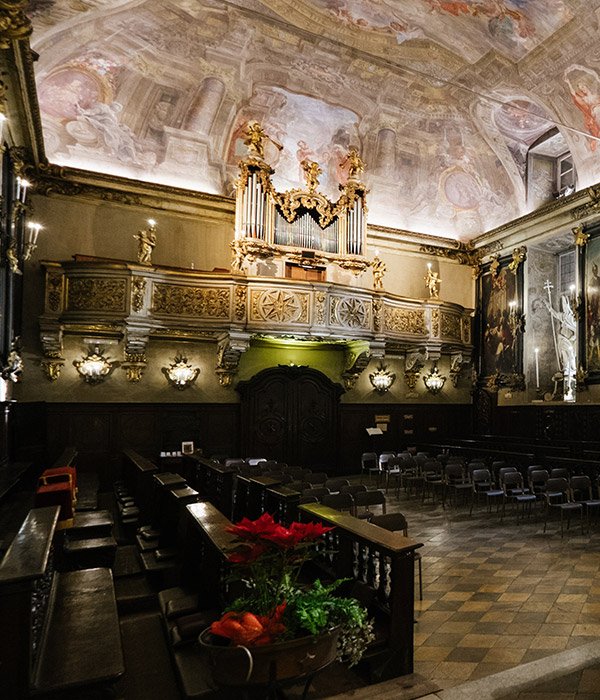 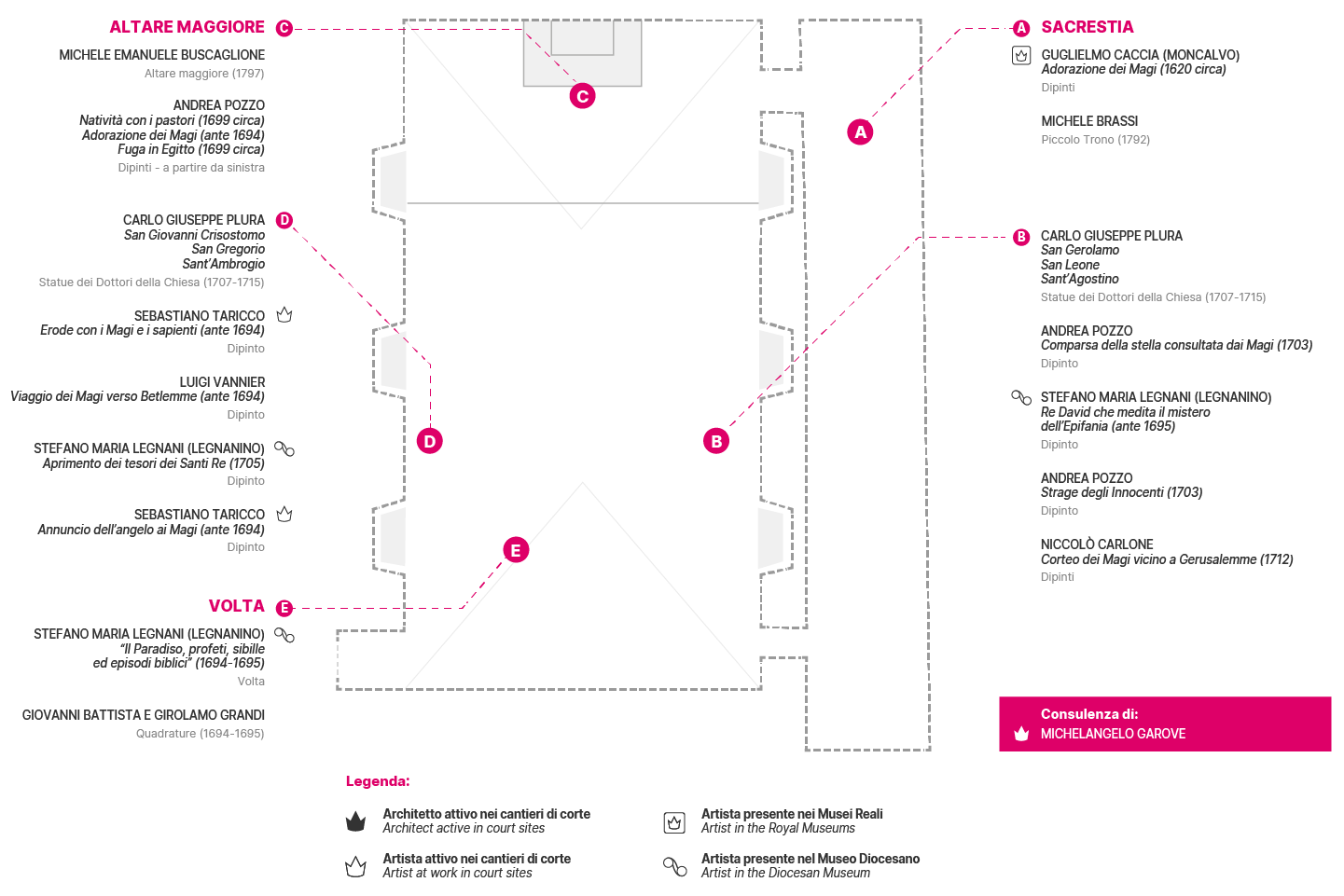