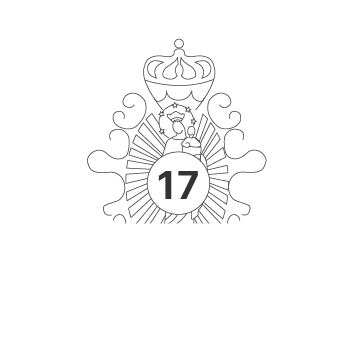 The Basilica of Maria Ausiliatrice in Valdocco was built at the behest of San Giovanni Bosco (St. John Bosco) as a means to fulfil his vocation to educate the young, which had been shown to him by the Virgin through prophetic dreams.

The work of don Bosco of Turin started in the first half of the 1800s. The activities held in the oratory, where unprivileged young people found a place of human and spiritual growth, were initially hindered by the lack of suitable places and the growing hostility of the townspeople who reluctantly accepted the cheerful and lively gathering place for the boys.
Moving from one place to another in more or less comfortable conditions did not shake this saint’s faith. In 1844 the Virgin appeared to him in a dream and indicated the place where saints Solutore, Avventore and Ottavio had been martyred as the area predestined for the construction of a magnificent church with an oratory next to it. The presence of the young disciples of don Bosco in Valdocco started in 1844 when the saint was called as chaplain to the small hospital of Marquis Giulia di Barolo. In 1852 the first church dedicated to San Francesco di Sales (St. Francis of Sales) was built, today part of the impressive Maria Ausiliatrice complex.

The area of Valdocco became a town quarter only in the XIX century, after the fortifications were dismantled and the city perimeter needed to be extended. In this quarter, characterized by its numerous mills and canals, proto-industrial activities damaging to the city sprung up as early as the XVIII century. Starting in the 1800s a series of charity institutions, alternative to the municipal ones, were set up there, such as the small hospital of the Marquise of Barolo and the Cottolengo complex. Therefore the presence of don Bosco in that quarter of the city was particularly meaningful and his work was of great social and religious value.
In 1863 Giovanni Bosco started to carry out his grand project of building the Basilica; with incomparable determination and fortitude he sought out the funds needed to start the works. He even tried to involve the municipal treasury – partly succeeding – and promoted lotteries. ln 1864 the project for the church, designed by the architect Antonio Spezia, was approved by the City Government and on 27th April 1865, during a solemn official ceremony the first stone was laid. In a very short time the building had assumed its essential shape (excluding the internal decorations) and on 9th June 1968 the Church was consecrated to Maria Ausiliatrice.
Various propaedeutic facilities for the Salesian program sprung up around the church to the point that today the term Valdocco is still used to refer to the Maria Ausiliatrice complex.
The church stands majestically at the end of the street that leads to it. In 1920 the monument to don Bosco sculpted by Gaetano Cellini was inaugurated in the square in front of the church.
The façade was modeled after the church of San Giorgio in Venice, with a neo-Palladian style. The dome is surmounted by the statue of the Madonna Benedicente (The Blessing Virgin Mary) created by Camillo Boggio. The church was expanded in 1929, by Mario Ceradini.

The internal space is astonishing in its majesty and the beauty of the polychrome marble. The fresco on the dome is particularly interesting; painted by Giuseppe Rollini, a young oratorian close to Don Bosco. The fresco expresses the Virgin’s Mary’s glory and the greatness of the work achieved by the Church throughout history, exalting its strength. Don Bosco is depicted at the feet of the Virgin.
The high altar, dedicated to the Virgin Mary, was designed by the architect Giulio Vallotti. The painting by Tommaso Maria Lorenzone that closes the apsidal space, depicts Maria Ausiliatrice (Our Lady, Help of Christians) surrounded by a chorus of Angels, the holy Evangelists recognizable by the symbols that distinguish them, and the holy Apostles. In the background at the centre of the painting we can make out the shape of the church and, in the distance, the Basilica of Superga, which inspired the church of Maria Ausiliatrice in its style and devotion.
The lateral Chapels are dedicated to saints and beati (blessed) who are particularly important in the Salesian tradition: The second on the left is the chapel of San Francesco di Sales, and the term Salesian derives from the devotion to him. The third chapel is dedicated to San Domenico Savio (1842-1857), a young disciple of don Bosco who died young and was always indicated by the saint as an example to follow. The second chapel on the right is dedicated to Blessed Maria Mazzarello (1837-1881), founder of the Small Daughters of Our Lady, Help of Christians. The remains of Blessed Maria Mazzarello and Domenico Savio are preserved in the chapels dedicated to them.
The right transept contains the remains of San Giovanni Bosco, canonized in 1934. The painting that stands out against the space of the transept is the work of Paolo Crida.
On 19th July 1911 the church was raised to the rank of minor basilica at the behest of Pope Pio X. 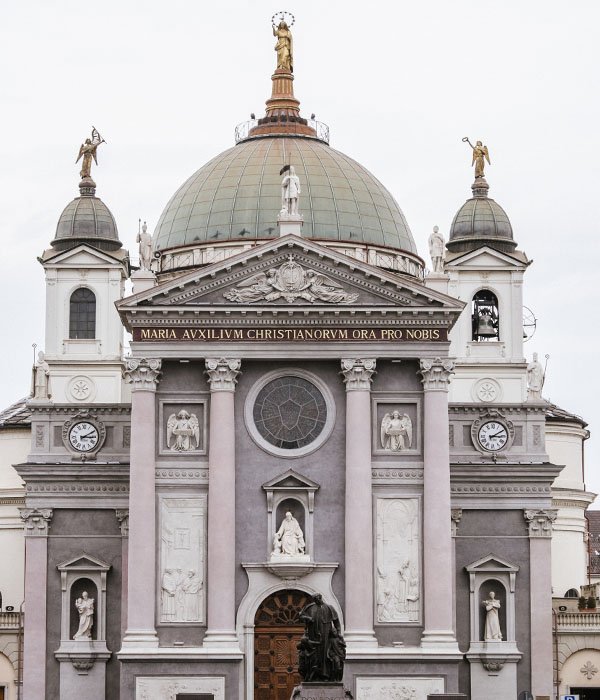 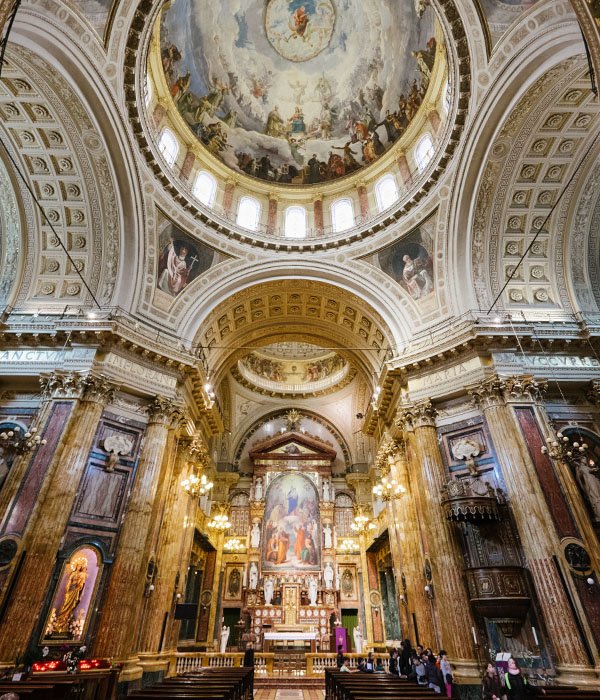 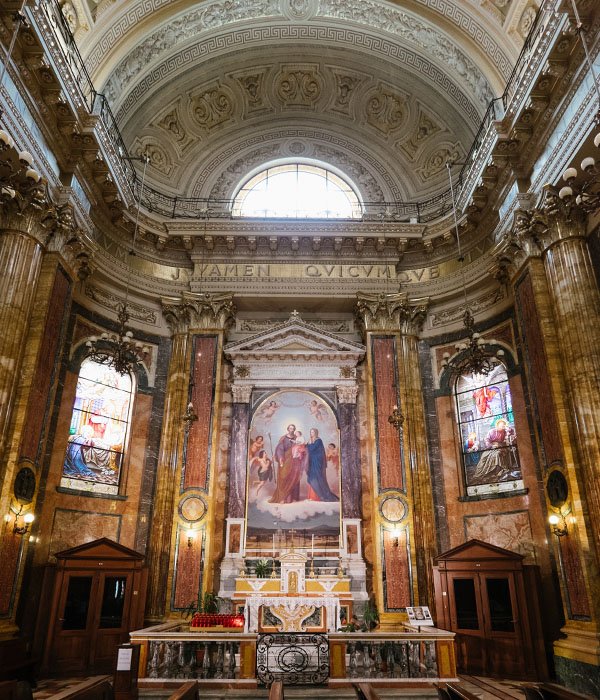 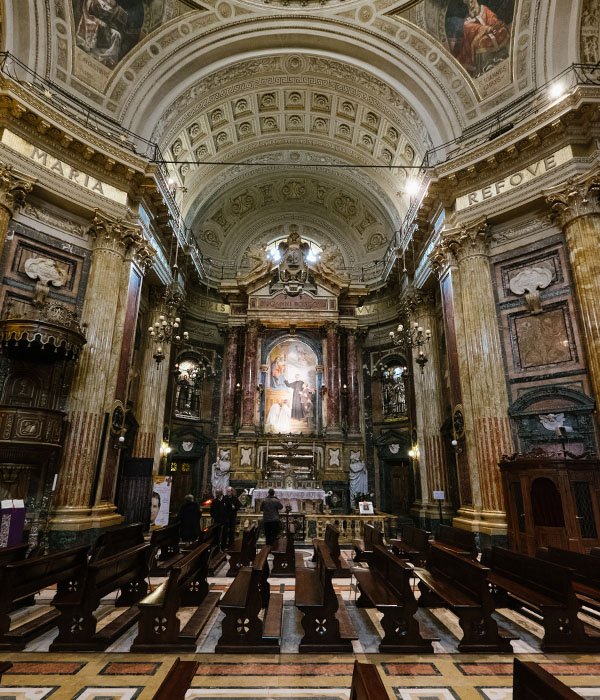 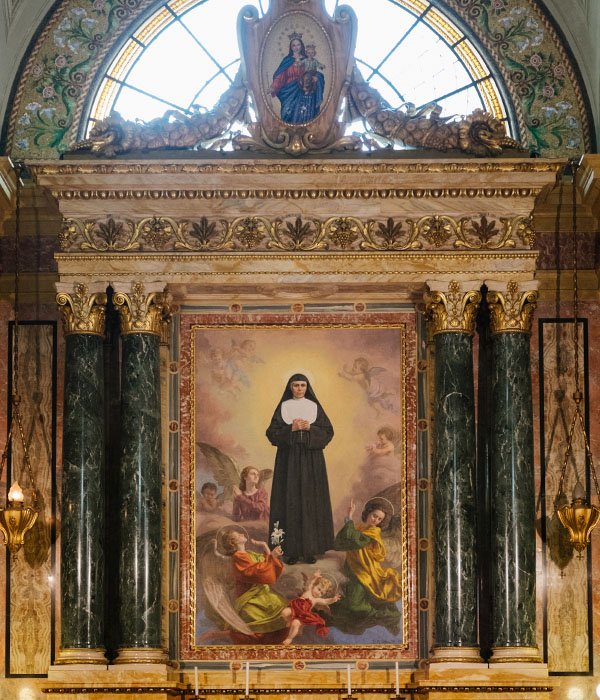 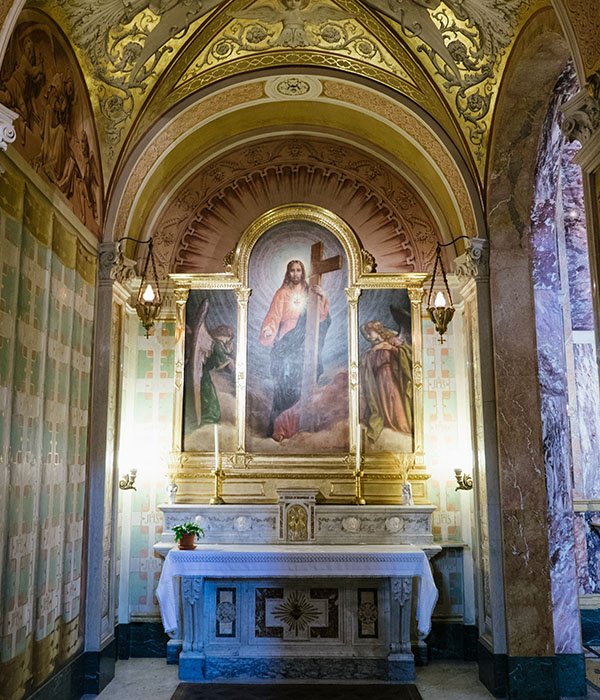