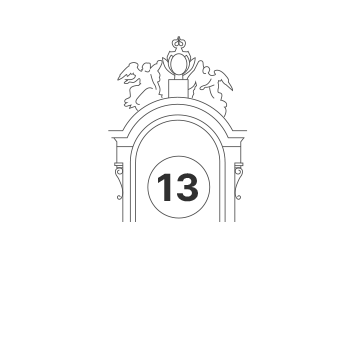 The Royal Church of Madonna del Carmine rises on the land of the third extension of the city of Turin, divided into lots at the beginning of the XVIII century by the ducal architect Michelangelo Garove.
The western extension of the city was characterized by the strong presence of a new type of residence building, the “income residence” that took the place of the aristocratic palaces and the large convents

The church rises in the block of St. Callisto, purchased in 1718 by the Carmelite friars after their premises were moved from Santa Maria di Piazza. The choice of building the new monastery in the areas of the new city was implemented in 1728, with the laying of the foundation-stone of the building planned by the architect Gian Giacomo Plantery.During the same year, the bishop Francesco di Gattinara put Filippo Juvarra, Royal Architect since 1713, in charge of planning the new church; it was dedicated from the beginning to Our Lady of the Carmine, and only after to the Blessed Amedeo IX of Savoy and to the Carmelite St. Maria Maddalena de’ Pazzi.The works started in 1732, and in 1735 the building was almost finished, with the exclusion of the façade made in 1871 by Carlo Patarelli. Since 1736 the church has been under royal protection.

Under the high altar, completed in 1763 according to the design by Benedetto Alfieri, is a relic of the Blessed Amedeo IX donated to the Carmelites by king Carlo Emanuele III in 1739.The inside of the building was subject to restoration in the front after it was seriously damaged by the air bombings in August 1943.Inside the building two areas are strongly separated: a lower one, quiet and in semi-darkness, and an upper one, wider and brighter. Light undisputedly dominates in the upper space, while in the lower area the architectural forms are enriched through the use of polychrome marbles and sculptural decorations.
The lateral chapels are connected to the nave through ample arches, characterized at mid-height by the presence of a suspended arch, originally surmounted by wooden sculptures by Stefano Maria Clemente, now substituted by copies in chalk representing the apostles.
The dedication to the Virgin is evident in the iconographical itinerary in the church, that finds its peak in the altarpiece, a work by the court painter Claudio Francesco Beaumont. It portrays the Madonna del Carmine e il Beato Amedeo IX di Savoia (Madonna del Carmine and the Blessed Amedeo IX of Savoy).
The painting, with its remarkable size, is a closing element for the nave, only apparently interrupting the architectural space that actually expands into an illusionistic perspective found inside the pictorial composition.
Sky and earth are two separate fields, defined by the drawing of the city walls, that ideally divide them: high up, the Madonna del Carmine with Child; in the lower part, the Blessed Amedeo IX, depicted in the act of giving alms to the poor, ascends to the Virgin. Amedeo IX (1435-1472) is remembered by popular tradition as a generous suzerain, attentive to the needs of the poor and the ill whom he often visited in hospitals.

Already considered a saint during his life, he was proclaimed blessed in 1677 thanks to the strong intercession by Francis of Sales.
The connection with the Carmelite tradition is represented in the chapel dedicated to the Immaculate (the last on the right) where a painting by Giaquinto da Molfetta portrays the prophet Elijah on Mount Carmel in the act of warning king Acab to go away because of the impending rain. The Virgin Mary, on a cloud that rises from the sea (the cloud in the Scriptures), brings water (Christ) to the arid desert (the heart of men).
Next to this chapel, we find the one dedicated to the Madonna del Carmine, in whose space a sober sculpture is placed in substitution of the more prestigious sculpture by Clemente, used only for the procession of the Blessed Virgin.
The Carmelites, organized in different orders and confraternities of religious and laymen, share the devotion of the “scapular”, a sort of miniature garment that identifies those who belong to the family of the Carmelites and makes explicit their consecration to the Virgin Mary. To this day, in the days preceding the celebration of the Madonna del Carmine (16th July), the faithful can consecrate themselves to the Virgin by means of the scapular. 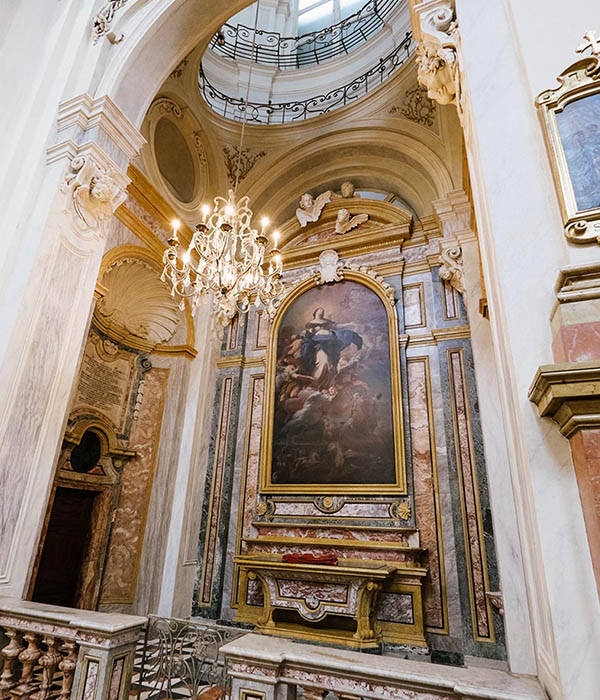 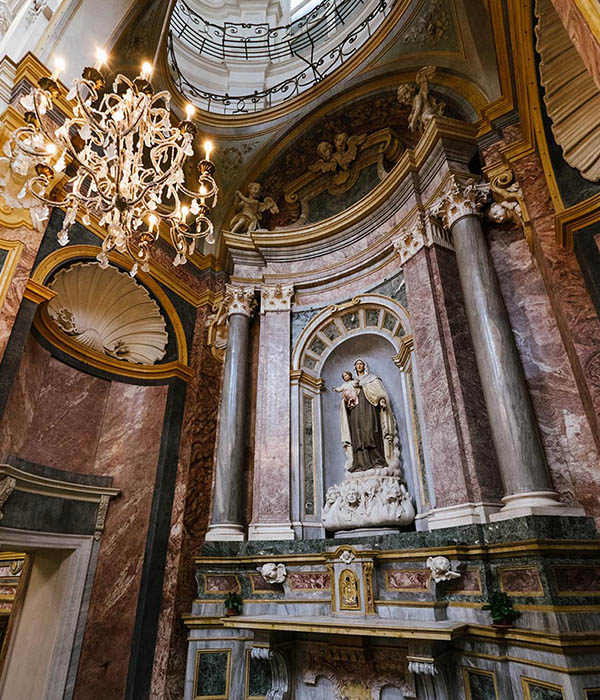 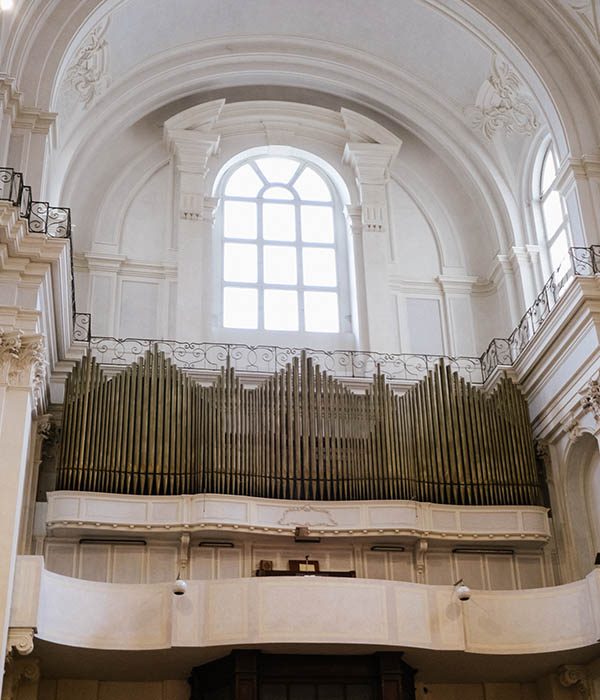 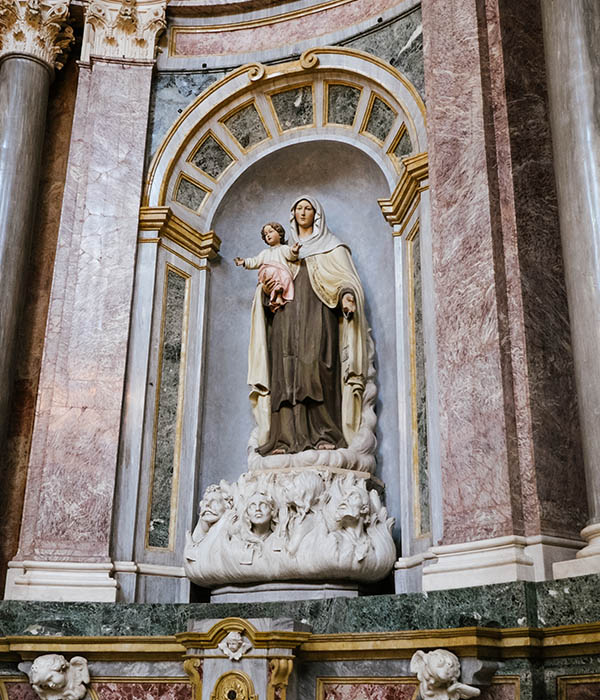 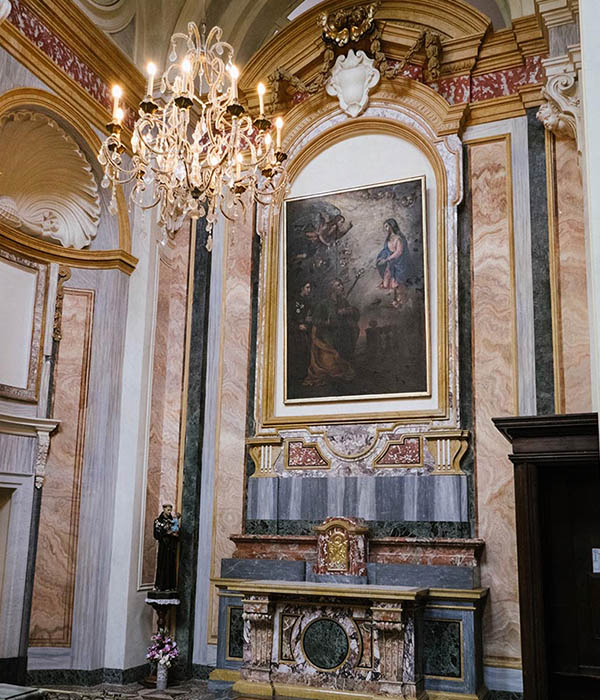 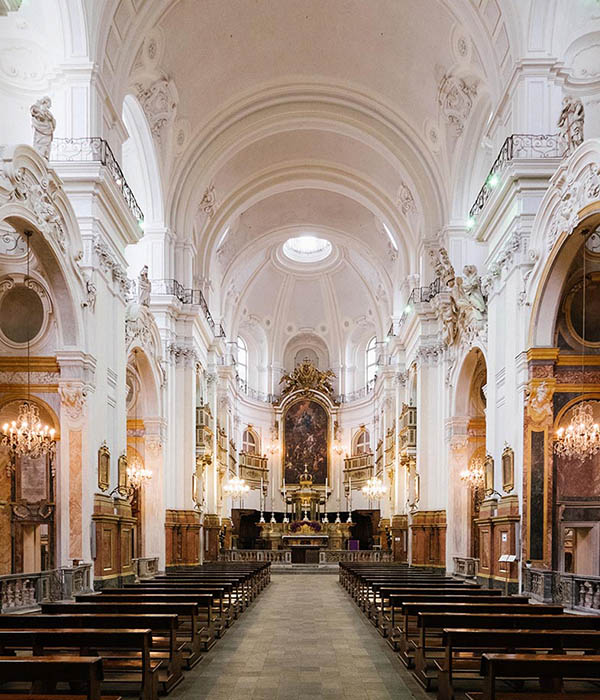