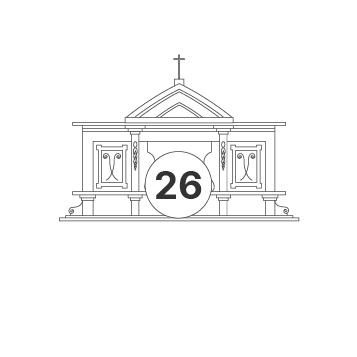 At the corner of Via Arsenale and Via Lascaris inside the city block once called “Santa Francesca’s” is the church of the Immacolata Concezione (Immaculate Conception), also known as Cappella dell’Arcivescovado (the Chapel of the Archbishopric), as it has been part of the complex of buildings housing the archbishop of Turin since 1776.

The complex was begun in the second half of the XVII century by the Missionary Fathers that arrived in Turin in 1655, called by Carlo Emanuele Filiberto di Simiana, Marquis of Pianezza. The Order of the Missionary Fathers was founded in 1617 by St. Vincent de Paul for the religious propaganda in the countryside.With the approval of the Duke Carlo Emanuele II, the marquesses Simiana di Pianezza promoted the building of the church and entirely funded the construction of the high altar. The construction yard was started in 1675 and interrupted at the level of the cornice in 1677. Almost twenty years later, in 1694, the works were resumed and brought to an end, and the church was consecrated by Mons. Alessandro Sforza in 1697. In the absence of a concrete basis of documents, the plan for the Immacolata Concezione is traditionally attributed for stylistic reasons to the Theatine friar Guarino Guarini, active in Torino at the service of the Duke since 1668.

The building shows on Via Arsenale a winding front, resulting from the intersection of two circles, the convex one of which proceeds in the inside. The planimetry is determined by two circumferences having the same diameter, located at the extremes of the longitudinal axis and separated by a rectangle which, in turn, is transversally extended into two chapels. The corner pillars strongly emerge from the surface of the wall and contribute to the creation of an interaction between the inner spaces, an element that characterizes the architecture of the friar from Modena.The vaults, with open sail and ribs (the two extreme ones) and barrel vaults (in the central rectangle), are lightened by indirect light filtered from the ambulatory that, at the level of their sprinter, continuously runs along the perimeter of the building. The façade was ended and plastered only in 1730, on the occasion of the beatification of St. Vincent de Paul.
In 1776 the Missionary Fathers were moved to the convent of the Holy Martyrs, as the king had decided to transform the Mission House into the Archbishopric. During the first half of the XIX century, the church became oratory for the ordinations and the archbishop’s particular functions: on 5th June 1841, Saint John Bosco was ordained priest here.
During the course of the past century the church remained for a long time without specific uses and, closed to the public, suffered the natural and inevitable deterioration of ancient buildings in which religious service is not regularly officiated. Substantial restorations were carried out in two stages between 1981 and 1988 under the supervision of Giuseppe Varaldo.
The restoration has brought back to light the original polychromic effects of the false marble in the pilaster strips and of the flower decorations in the spaces between them.
The works also enhance some peculiarities of the construction, such as the curious interspace almost one meter high under the church, with the exclusion of the area under the presbytery, where an actual underground room covered with vaults was used in the distant past as a burial place for the religious. The floor was suspended on the interspace below by means of a structure of wooden beams and joists, with a wood-block flooring, resting on small wooden pillars.

The high altar was made by marble workers from Lugano between 1697 and 1709 according to a plan designed by a Piedmontese architect. The affinity with the high altar of San Lorenzo and the congruity with the church’s structure, which becomes a simple room for the admiration of the altar, help keep up the hypothesis that the design was based on an idea by Guarini.
The table is detached from the rest of the altar, planned as an imposing canopy that expands into the small choir. The polychromatic marble structure is decorated with an oval depicting a Madonna with Child and carries the coat of arms of the Simiana di Pianezza.
The vault is decorated with original carton panels, painted with gouache technique, gilded and shaded with geometric and flower patterns, and with three paintings on canvas by Michele Antonio Milocco, anchored to the intrados of the vaults.
The left chapel, called “del Crocifisso” (“of the Crucifix”), was built in 1696 by will of Giuseppe Nicola Vittone (father of the renowned architect, Bernardo Antonio Vittone); upon the death of the donor in 1709 the Missionary Fathers received its ownership and dedicated it to St. Vincent de Paul; Cardinal delle Lanze consecrated it in 1759. The altar was made according to a design by Bernardo Vittone, the altarpiece depicts La predica di san Vincenzo de Paoli (St. Vincent de Paul’s Sermon) by Alessandro Trono (1738).
The chapel on the right is dedicated to St. Joseph: the altar appears to have a more ancient shape than Vittone’s, and the altarpiece shows the Transito di san Giuseppe by Giovanni Antonio Mari. 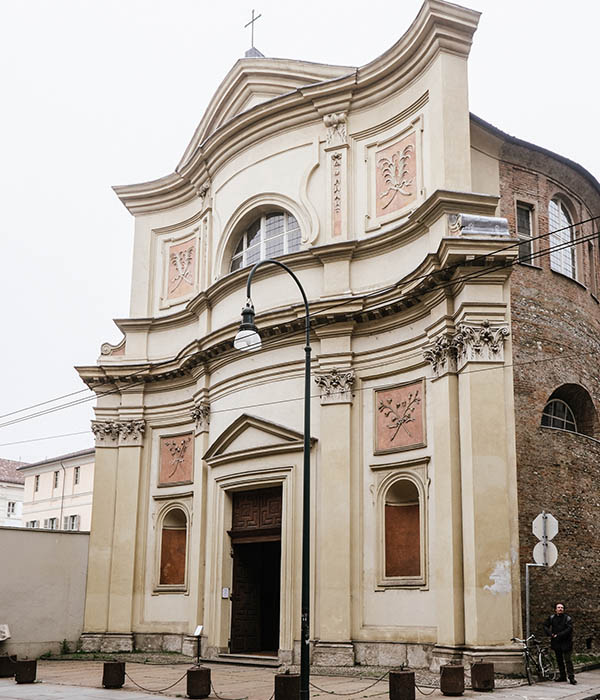 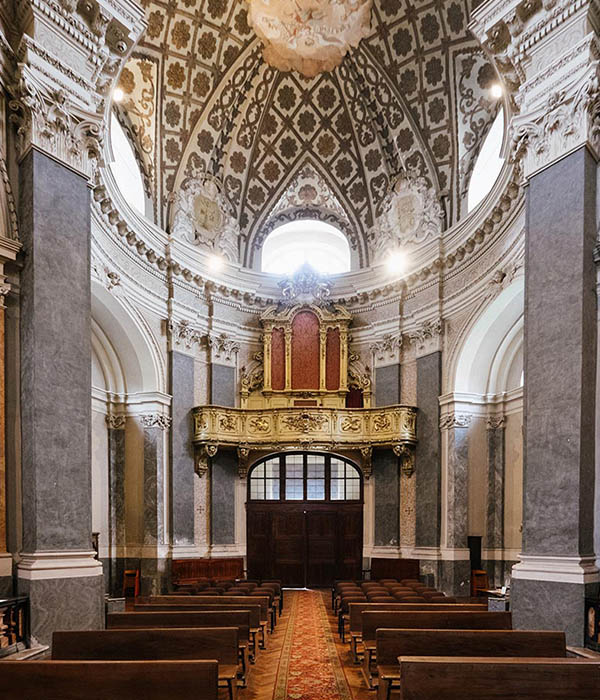 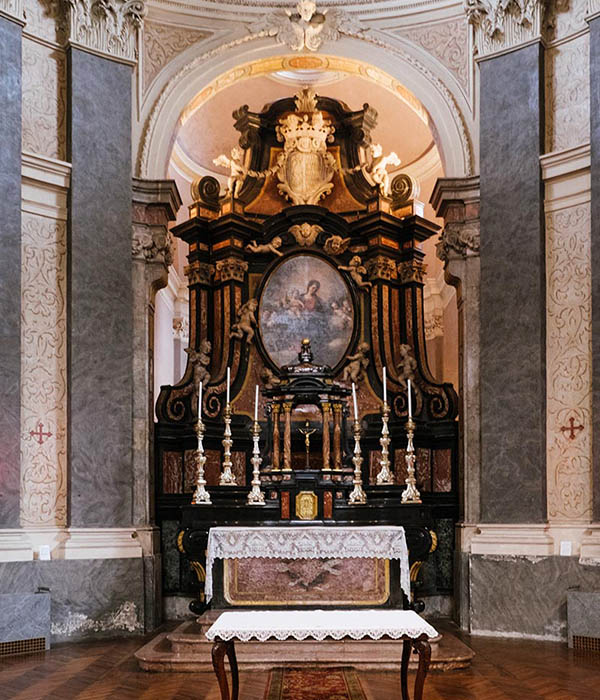 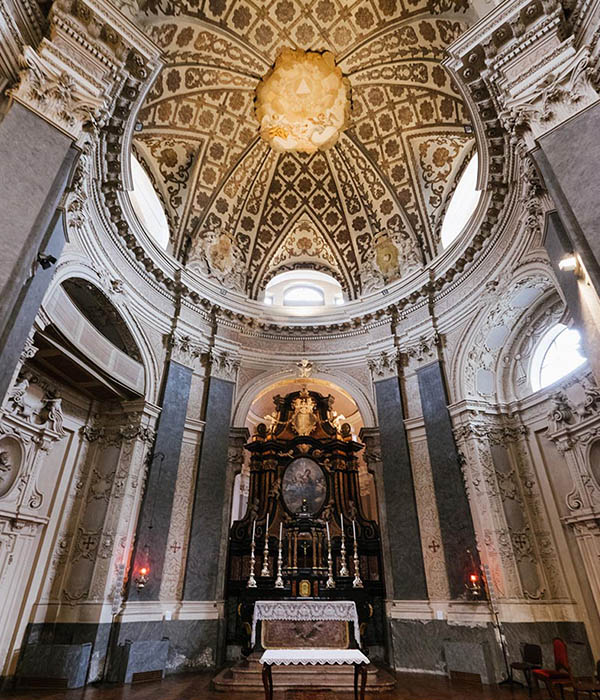 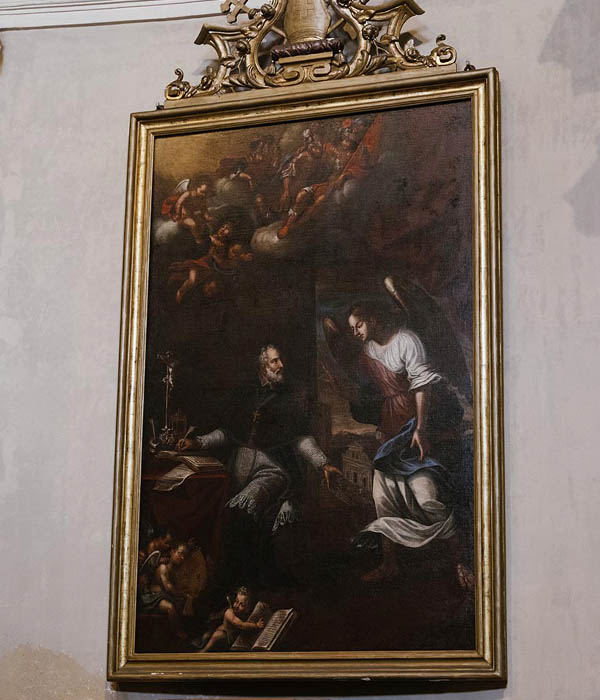 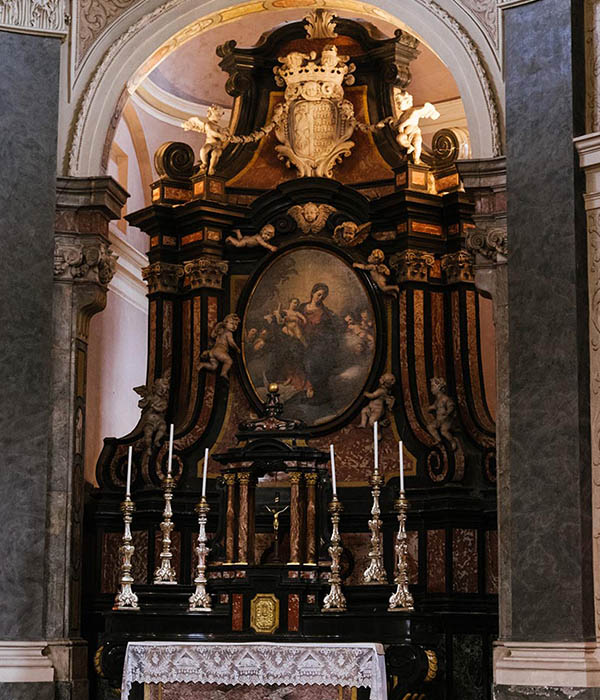